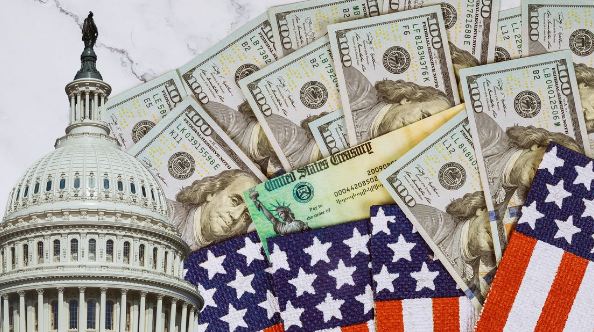 WASHINGTON — The Senate passed a nearly $500 billion interim coronavirus bill by voice vote Tuesday that includes additional money for the small-business loan program, as well as for hospitals and testing, making way for the legislation to become law as soon as the end of the week.

House Speaker Nancy Pelosi, D-Calif., and Senate Minority Leader Chuck Schumer, D-N.Y., said in a joint statement that they were “proud” to have secured an interim aid bill that went beyond the initial Republican proposal.

“Democrats flipped this emergency package from an insufficient Republican plan that left behind hospitals and health and frontline workers and did nothing to aid the survival of the most vulnerable small businesses on Main Street,” they said.

Senate Majority Leader Mitch McConnell, R-Ky., said in a statement announcing the deal that in more than a week of negotiations, “while our Democratic colleagues delayed the urgent [Paycheck Protection Program] funds, additional federal help for hospitals and health care providers became urgent as well.”

“I am just sorry that it took my colleagues in Democratic leadership 12 days to accept the inevitable, and that they shut down emergency support for Main Street in a search for partisan ‘leverage’ that never materialized,” McConnell added.

House Majority Leader Steny Hoyer, D-Md., advised members to return to Washington for a 10 a.m. vote on Thursday, meaning the legislation could be on President Donald Trump’s desk by the end of the week.

Trump suggested Tuesday that if the bill is passed, he will sign it into law.

“I urge the Senate and House to pass the Paycheck Protection Program and Health Care Enhancement Act with additional funding for PPP, Hospitals, and Testing,” he tweeted Tuesday afternoon.

Schumer expressed optimism about getting a deal in an interview Tuesday morning on CNN, saying, “There is still a few more I’s to dot and T’s to cross, but we have a deal, and I believe we’ll pass it today.”

The minority leader said he and Pelosi had been on the phone “well past midnight” with White House chief of staff Mark Meadows and Treasury Secretary Steven Mnuchin and “came to an agreement on just about every issue.”