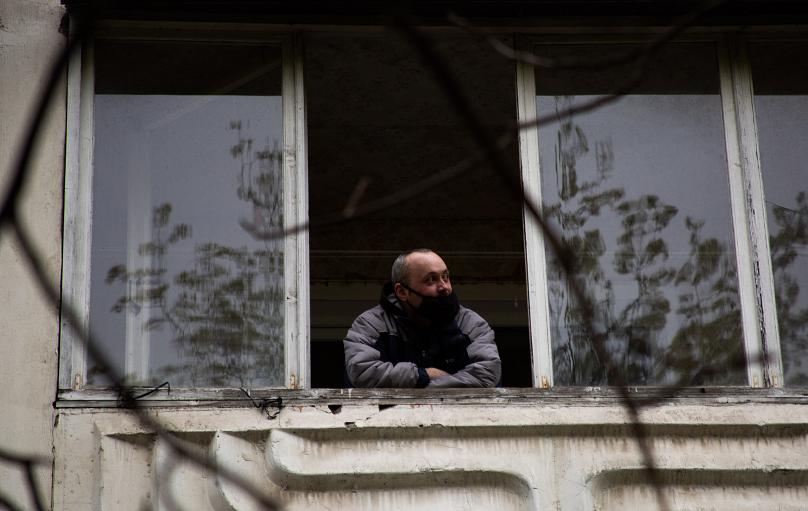 The streets in Kyiv are mostly empty, with only a few people walking outside wearing masks. The majority of shopfronts are closed, and an increasing number of “for rent” signs become visible with every step taken away from the city centre.

The government has forced Ukrainians to close most shops and urged people to stay inside to stop the spread of coronavirus.

In contrast to wealthier European countries, Ukrainians have a weaker social security system, meaning people are mostly left on their own when they become unemployed.

The quarantine will officially last until the end of April, but politicians are talking about an extension until May or potentially longer.

It is affecting people such as 36-year-old Maxim Ivaschuk, who worked selling mobile phones on the outskirts of Kyiv.

“Due to the virus, many orders were cancelled for three months,” said Ivaschuk, who suddenly found himself out of work. “The company has sent everyone home until at least June.

“I can say that I lost my job because of the coronavirus,” he said, explaining he finds it hard to stay at home.

“I have already lost a lot. I was counting on my monthly salary. I have a loan, utility bills, and must pay for food.

“Now, unfortunately, I am the only one to support my family, which is hard.”

Ivaschuk is not the only one running out of money. New studies show Ukrainians are burning through their savings fast because many live from pay cheque to pay cheque. The marketing company Gradus published a study three weeks ago saying that 57 per cent of Ukrainians only have savings for another two weeks of quarantine. The survey asked 1,200 people via their smartphones.

Tymofiy Mylovanov lost his position as Ukraine’s minister for economic development, trade, and agriculture in a government reshuffle before the coronavirus crisis began. He has since been critical of the government’s quarantine measures, calling it “economic suicide” and claiming poor people will suffer.

“At first, I estimated that 500,000 people would lose their jobs. It seems that I was wrong. It was too low an estimate,” said Mylovanov, who is now the new president of the Kyiv School of Economics.

Many going without work
According to figures from the State Employment Service, 37,000 Ukrainians registered as unemployed last week, bringing the total number to 388,000. It is 22 per cent higher than the same period last year, according to the Kyiv Post.

However, Mylovanov expects the real number to be much higher. Ukraine has a large shadow economy, he explained, where not everyone is working on contracts, and far from everyone registers as unemployed to the authorities.

“If we had 37,000 applying for unemployment last week, according to the authorities, the real figure of people losing their jobs is probably five times higher than that or even more. Ukraine might have seen an increase in unemployment of 300,000 to half a million already,” said Mylovanov, and points out that the government always expects the real unemployment level to be around five times higher.

“If we look at the US and the development in Ukraine, unemployment may increase to 10 to 15 per cent during the next months, which will mean two to three million people,” he said.

People are losing their jobs
As of Wednesday, Ukraine had 3,764 confirmed cases of COVID-19 with 108 fatalities. It is much lower than in other countries, and the Ukrainian government has closed most shops, all parks, as well as banning people from walking outside without masks to keep the number of infections down.

A survey among the members of the Union of Ukrainian Entrepreneurs shows that half of the entrepreneurs cannot survive another month of quarantine.

Another 25 per cent say they can only survive until June. One-third of the companies reported 90 to 100 per cent losses and that they have fired half of their employees. It is especially smaller companies that are affected, the survey found. European Business Association in Ukraine found similar conclusions when they asked 155 entrepreneurs about the effects of the quarantine: 18 per cent are considering the closure of their business, and 75 per cent reported losses of up to 75 per cent of their revenue. 41 per cent expect to cut salaries.

In Kyiv, Euronews met with 36-year-old Olga Kustenko. She is one of three owners of the local café First Point in the hipster neighborhood Podil. They have been able to stay open after long discussions with the police that ended up with them introducing a take-away system. 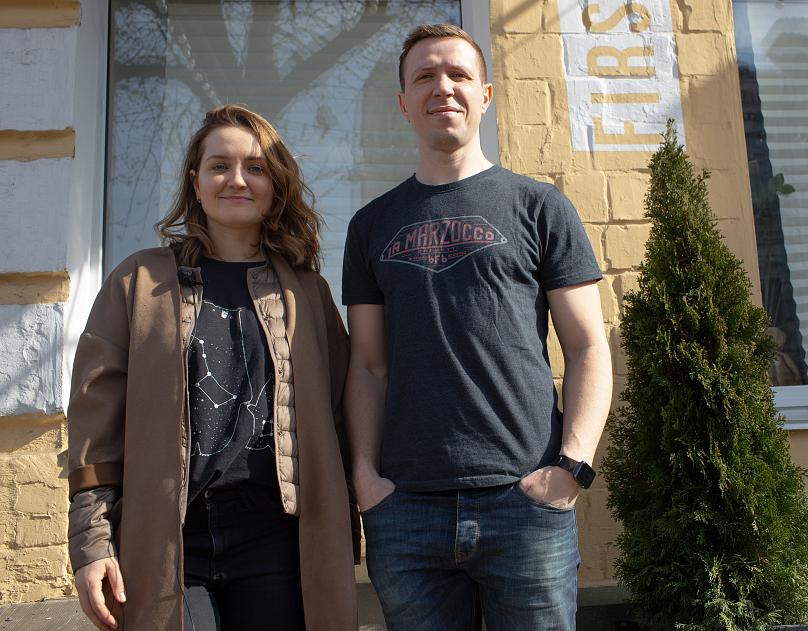 “We could not understand how big companies such as McDonald’s could say open with take away when we could not,” said Kustenko. “We can’t just close. We are not the UK, not other countries, where authorities are paying smaller businesses’ salaries just to be closed. We do not have this luxury.”

Revenue has declined 30 per cent at First Point, but it has managed to stay in business, which is better than a lot of other cafes. However, it still had to cut workers’ salaries, and the three owners are not earning any money at this point, Kustenko said.

“At first, we were afraid to run out of money and not being able to pay the salary and rent,” said Kustenko. “It looks better now, but the authorities need to find a better solution.”

Businesses and ordinary people in Ukraine are struggling, according to Anders Åslund, an economist and senior fellow at the Atlantic Council.

“The crisis affects countries such as Ukraine very much,” said Åslund. “There is probably not any solution, because the government in Ukraine cannot afford to pay people too much.

“The crisis will, of course, have a massive effect on people living in Ukraine. The consequences are completely different from what we will see in a country such as Denmark.”

People might go on the street
According to Mylovanov, the deterioration of the economy is forcing people to defy the quarantine to put food on the table.

Most people Euronews approached on the streets of Kyiv did not want to be quoted. However, some expressed concern about the future, and a father of three said that he can only “tighten his belt.” 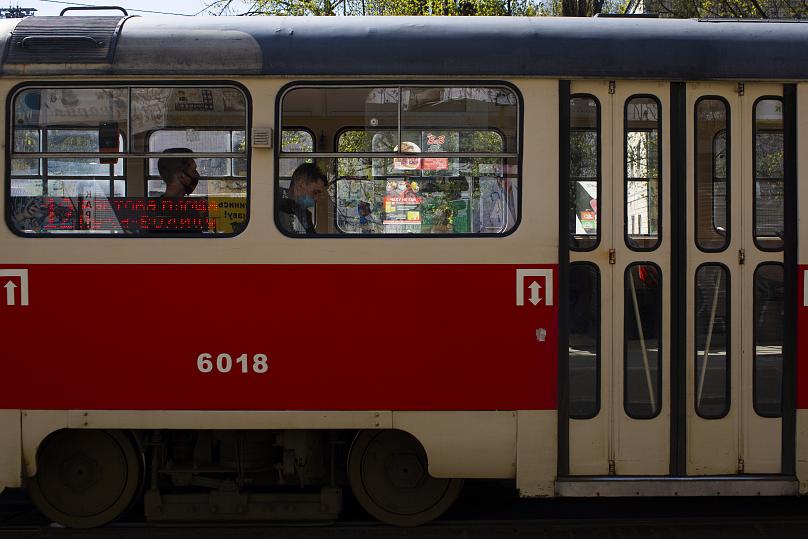 Ivaschuk has a similar view. He stays at home as much as possible to avoid the risk of bringing the virus home to his family. He says it is hard but hopes the situation will soon be under control so the quarantine can be lifted. He finds it hard to imagine it could last until after summer.

“An old friend of mine has given me some work at his online store, where he sells car tyres,” said Ivaschuk, “It is not the same money that I received at my previous job, but it is better than nothing at this point.”

Help on the way
The government on Monday passed a new budget for 2020, allocating around €2.2 billion to fight coronavirus and provide benefits for unemployed Ukrainians.

However, the budget also tripled the deficit, which the government hopes a loan from the International Monetary Fund (IMF) will cover.

“We are well aware of what is happening now,” said finance minister Serhiy Marchenko, according to Kyiv Post, “The negotiations with the International Monetary Fund (IMF) are in the final stages. We expect credit support from the World Bank [and] the European Commission.”

However, there is still no final agreement on the IMF loan, expected to be $8 to $10 billion. Even such an amount might not be enough, said Mylovanov.

“I see two scenarios. One with limited international support and limited support for the unemployed, which will result in people defying the quarantine and with political and civil unrest,” he said. “The second option is more financial stability with support from the IMF and the World Bank. Still, it is uncertain whether their support will be enough.”

He points out that people in Ukraine will need at least €164 per month to make ends meet. Unemployment benefits are often about €22 to €60, he said, which is not enough.

According to the government’s new budget, it expects a 3.9 per cent decline in GDP for 2020. The Ukrainian prime minister Denys Shmygal said last week that “Ukraine cannot afford to sit on the couch for two or three months, so the economy will need to be launched.”

Shmygal said the government will not consider weakening the quarantine until some time in May, according to the news site Censor.net.

“It is useless to predict an exact number, or when the quarantine stops,” said Åslund, “But Ukraine will be hit hard, and the IMF loan cannot do that much to change that.”

“Many countries around the world are in similar problems. Many will go into default because of this financial crisis,” Åslund said. “There is no easy way out. There will be large social consequences for poor people in those countries.”