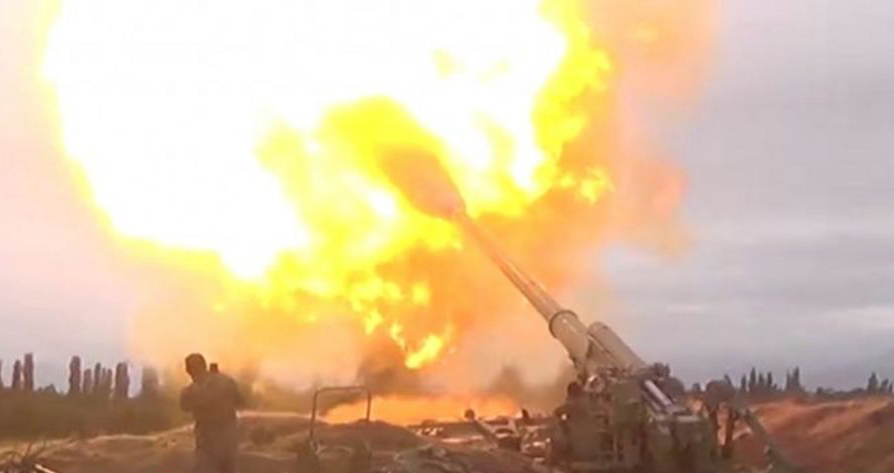 Fierce fighting raged for a second day following a flare-up of a decades-old conflict in the Caucasus region of south-eastern Europe.

Dozens of deaths were reported in battles between forces fighting for Armenia and Azerbaijan on Monday.

At the heart of the conflict is a dispute over control of the mountainous region of Nagorno-Karabakh.

It is recognised as part of Azerbaijan, but has been controlled by ethnic Armenians since a war ended in 1994.

Tens of thousands of people died during that war and a million others were forced to leave their homes.

On Monday night authorities in Nagorno-Karabakh reported that another 26 of its servicemen had been killed in the fighting, bringing its total losses to more than 80.

Other countries are concerned that the latest fighting could spill out of the region and draw in neighbouring powers, including Turkey, Russia and Iran. 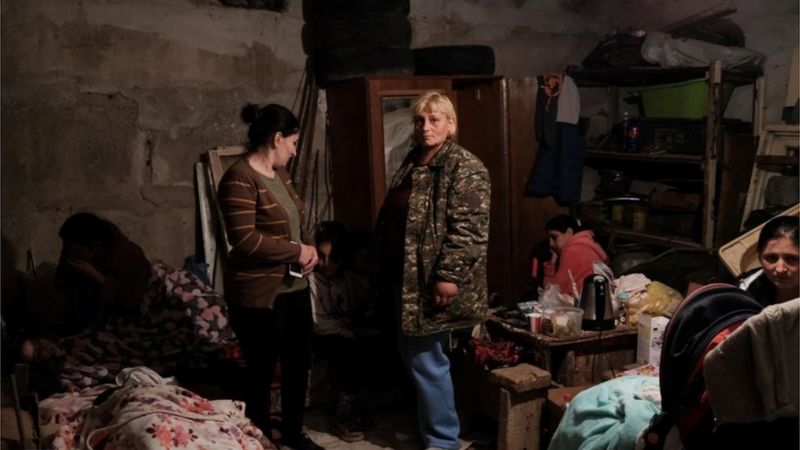 They are also keen to maintain stability because major gas and oil pipelines run through the area.

The latest intense fighting began on Sunday, with both Armenia and Azerbaijan blaming each other for the escalation.

Both parties said they had mobilised more soldiers and declared martial law in some areas.

The fighting is the heaviest seen in the conflict since 2016, when at least 200 people were killed in clashes.

Where do other countries stand?
Turkey has declared its support for Azerbaijan, while Russia – which has military bases in Armenia but is also friendly with Azerbaijan – called for an immediate ceasefire.

On Monday, Turkish President Recep Tayyip Erdogan called on Armenia to immediately end its “occupation” of the region and withdraw, saying this was the only course of action that would secure peace.

What do Armenia and Azerbaijan say?
In a BBC interview, Armenian Foreign Minister Zohrab Mnatsakanyan accused Azerbaijan of sabotaging a peaceful settlement to the conflict and insisted Armenia must defend the region.

A spokesperson for Azerbaijan’s presidential administration told the BBC that his country was taking “counter-measures” against provocations by Armenia. 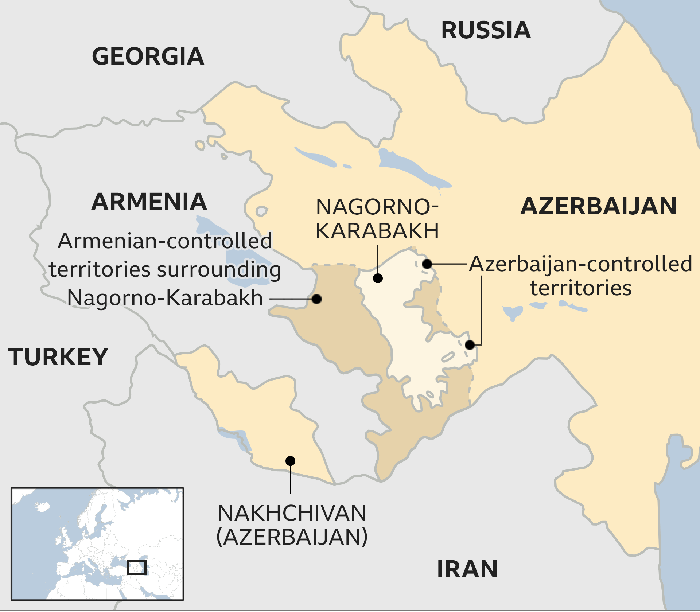 In Soviet times, it became an autonomous region within the republic of Azerbaijan

Internationally recognised as part of Azerbaijan, but majority of population is ethnic Armenian

Stalemate has largely prevailed since a 1994 ceasefire

Russia has military bases in Armenia

What’s the latest from the battlefield?
As well as the deaths reported on Monday, the authorities in Nagorno-Karabakh had on Sunday reported 16 fatalities and more than 100 people wounded.

Armenian authorities said 200 Armenians were wounded, according to Interfax.

Azerbaijan said two Azeri civilians were killed on Monday, following the deaths of five people from the same family died on Sunday. It added that 30 civilians were wounded.

Nagorno-Karabakh authorities said their forces had reclaimed some territory taken by Azeri troops on Sunday.

Meanwhile, Azerbaijan’s government said on Monday that it had occupied strategically important locations in the disputed region. 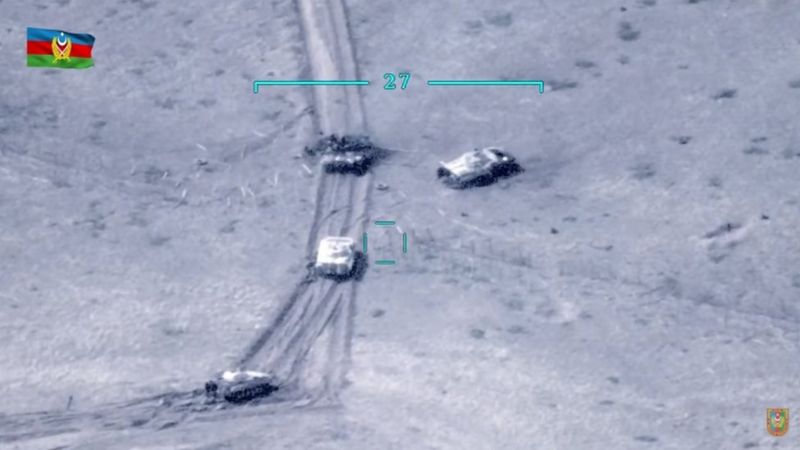 In July, at least 16 people died in border clashes, prompting the largest demonstration in years in the Azerbaijani capital, Baku, where there were calls for the region’s recapture.

France, which has a large Armenian community, called for an immediate ceasefire and dialogue

Iran, which borders both Azerbaijan and Armenia, offered to broker peace talks

What’s the background?
In 1988, towards the end of Soviet rule, Azerbaijani troops and Armenian secessionists began a bloody war which left Nagorno-Karabakh in the hands of ethnic Armenians when a truce was signed in 1994.

Tens of thousands died in fighting, and many ethnic Azerbaijanis were forced to flee their homes.

It is now a de facto independent region, relying heavily on support from Armenia. But it is not recognised by any UN member, including Armenia.

Swathes of Azeri territory around the enclave are also under Armenian control. 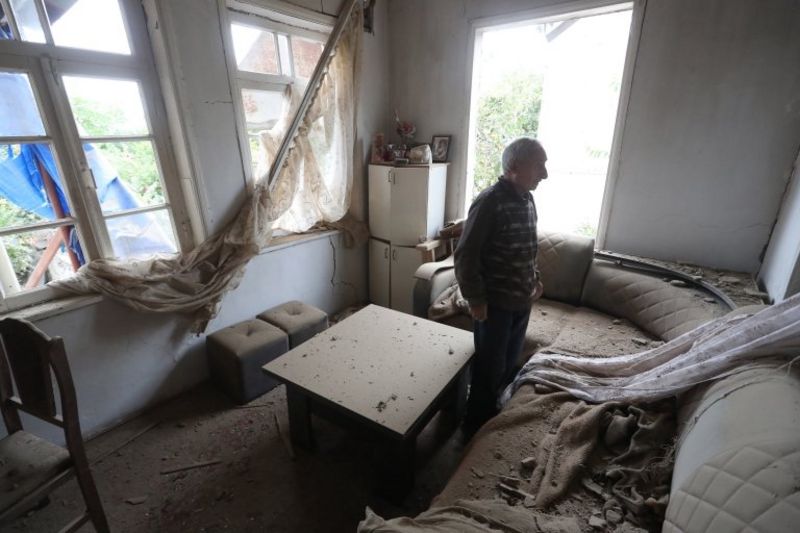 Negotiations have so far failed to produce a permanent peace agreement, and the dispute in the region remains one of post-Soviet Europe’s “frozen conflicts”.

Karabakh is the Russian rendering of an Azeri word meaning “black garden”, while Nagorno is a Russian word meaning “mountainous”. Ethnic Armenians prefer to call the region Artsakh, an ancient Armenian name for the area.

Over the years both sides have had soldiers killed in sporadic breaches of the ceasefire. Landlocked Armenia has suffered severe economic problems due to the closure of borders with Turkey and Azerbaijan.

Russia, France and the US co-chair the Organization for Security and Co-operation in Europe’s Minsk Group, which has been attempting to broker an end to the dispute.