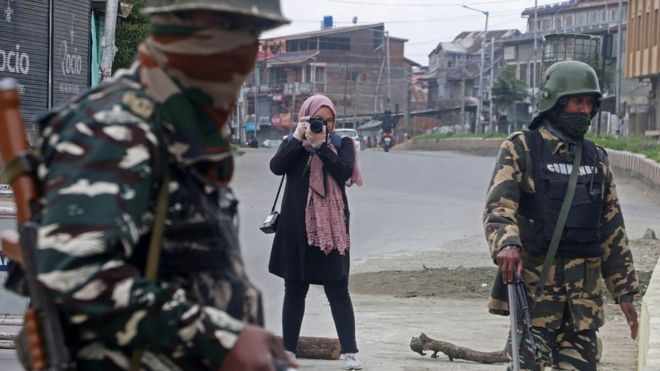 Journalists in Indian-administered Kashmir have expressed alarm at reporters being investigated by police under a stringent anti-terrorism law.

Gowhar Geelani is the third journalist in recent days to face such action. He is accused of “glorifying terrorism” through his social media posts.

The Editors Guild of India warned such cases are a gross misuse of power aimed at striking terror into journalists.

Kashmir has been under restrictions since Delhi revoked the special status of the Muslim-majority region last August.

Kashmiri journalists have launched a social media campaign seeking the withdrawal of charges against Mr Geelani and two other journalists, Masrat Zehra and Peerzada Ashiq.

“We stand together and we will fight it together. This won’t silence us. Journalism is not a crime,” reads one post.

The Editors Guild of India issued a statement, expressing “shock and concern over the high-handed manner” in which law enforcement agencies have used prevailing laws to deal with journalists in Srinagar. 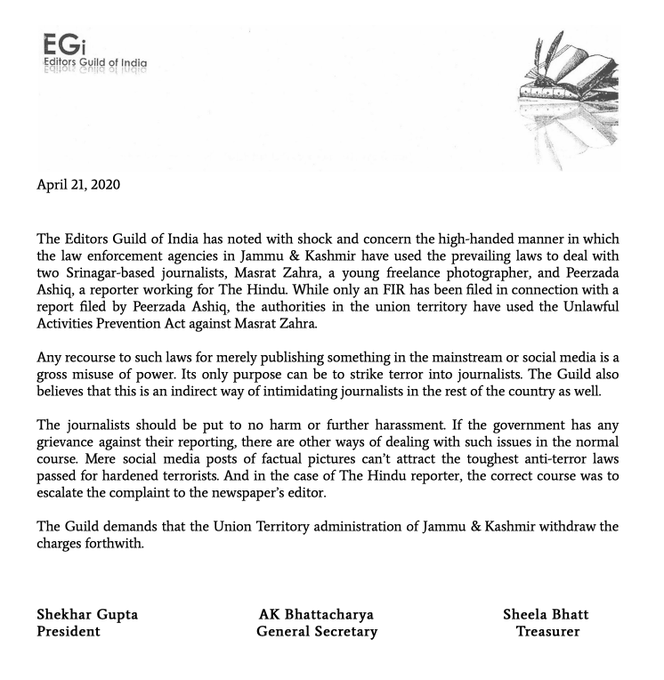 Speaking to the BBC, Mr Geelani denied all the charges against him as “baseless and concocted”.

A top police official asking for anonymity told BBC Urdu that the journalists were not booked for their reporting. “When someone indulges in provoking people on social media the law will take its own course. The freedom of expression is subject to peace and security and we are only following the law,” he said.

But journalists say it has become increasingly difficult to report ever since India revoked the region’s semi-autonomous status in August, placing thousands under detention and cutting off communication lines for months.

Over the past few months, reporters say they have been regularly summoned to police stations to “explain” reports, while others have had charges filed against them, had their mobile phones confiscated and intimidated into revealing sources.

“Even if there is no official gag on the press, making reporting a punishment amounts to that only,” Riyaz Malik , a Srinagar-based journalist, told BBC Urdu.