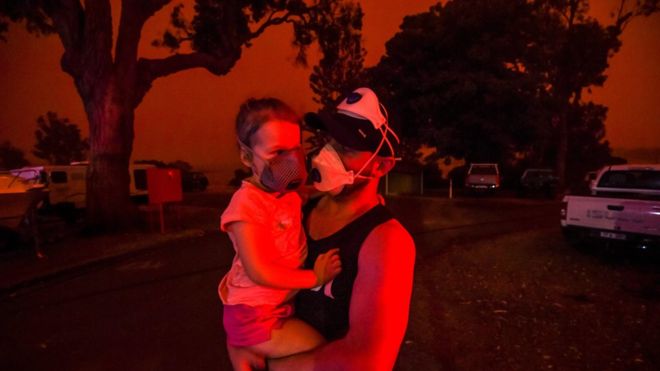 Smoke from the massive bushfires that hit Australia in the 2019-20 summer was linked to more than 445 deaths, a government inquiry has heard.

More than 4,000 people were admitted to hospital due to the smoke, Associate Prof Fay Johnston from the University of Tasmania told the Royal Commission.

The fires burned for weeks, killed more than 30 people and caused air pollution which can be harmful to health.

The inquiry is due to suggest ways to improve the natural disasters response.

The fires, fuelled by record-breaking temperatures and months of severe drought, devastated communities and destroyed more than 11 million hectares (110,000 sq km or 27.2 million acres) of bush, forest and parks across Australia.

Residents of Sydney – Australia’s largest city – endured smoke for weeks and the air quality exceeded “hazardous” levels on several occasions. Other major cities, including the capital Canberra and Adelaide, were also shrouded by smoke.

Prof Johnston, an environmental health specialist at the University of Tasmania’s Menzies Institute for Medical Research, said 80% of Australians, or about 20 million people, were affected by smoke from the fires.

Some 3,340 hospital admissions and 1,373 emergency room visits were linked to the smoke, she added. The estimates were based on modelling of the impact of ultrafine particles – referred to as PM2.5 – that are a ninth of the size of a grain of sand.

The health cost associated with premature loss of life and admissions to hospitals was estimated at AUD2bn (£1.1bn; $1.3bn), “about 10 times higher” than in previous years, Prof Johnston said.

This did not include costs associated with ambulance callouts, lost productivity or some diseases where impacts would be difficult to model, including diabetes.

The commission also heard that insurance claims related to the fires totalled AUD2.2bn.

The commission is expected to release its findings by 31 August. Bushfires are a regular feature in the Australian calendar, but recommendations by dozens of inquiries held in previous decades have still not been implemented.