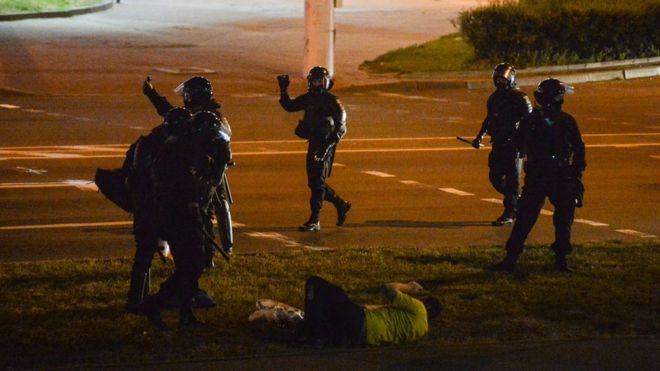 Seeing police brutality up close has shocked Belarusians, first during the street clashes with protesters and then as accounts spread of cruelty towards those taken to detention centres.

A 25-year-old man died in custody after he was detained on Sunday. His mother said he had been held in a police van for hours.

A street very close to my home in Minsk was at the heart of one of the confrontations between police and protesters this week.

Stun grenades went off and people screamed as riot police struck them with batons. The screams were so loud that they drowned out the sound of the grenades.

Defiance and anger
The protests are unprecedented in their scale as people in dozens of cities, towns and even villages rise up and call for the main opposition figure, Svetlana Tikhanovskaya, to be recognised as the winner of Sunday’s presidential election.

I watched as young men and women ran for safety past my windows, taking a break from the clashes before returning to face the police.

I was thinking that the protest will decrease today. But no! After being shot and beaten last night, even more, people are showing up. The spontaneous rallies were taking place around Belarus, women initiated marches. Protest is fully decentralized, Hong Kong style pic.twitter.com/UqPcGo8mf8

My female neighbours are trying to stop their sons and husbands from joining the nightly protests, worried for their safety.

Some 7,000 people have been detained and you don’t have to be protesting to be arrested. My friend’s son, a university lecturer, was detained randomly before the elections and spent three days in a cell. The detainee who died in Gomel in southern Belarus, Alexander Vikhor, had been on his way to see his girlfriend, according to his mother. 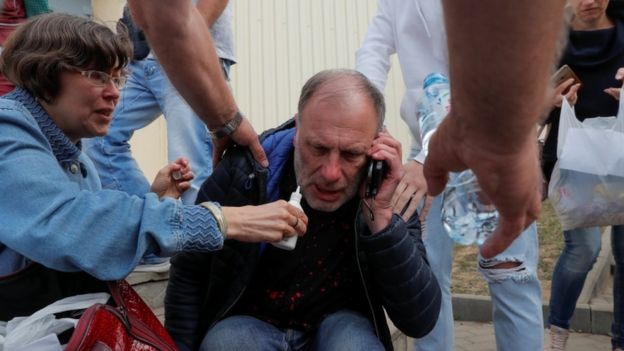 The interior ministry insists its measures are “adequate” and points out that more than 100 police have been injured and 28 treated in hospital. There have been deliberate attempts by drivers to run over traffic police and “law enforcers have used weapons” to stop them, it says.

People here are angry: with police, authorities and above all President Alexander Lukashenko. No-one I have spoken to has any support for what police are doing.

They watch the Belarusian leader speaking on TV and laugh at him. They wonder what he thinks will happen next and how he will live with himself.

Shouting from balconies
A friend tried to travel across Minsk, which is difficult now as several metro stations in the centre are closed. When she complained to metro staff on the platform, they apologised and blamed the situation on Mr Lukashenko.

He has dismissed the majority of protesters as being jobless or having a criminal past and has instructed the government to find jobs for them.

Police have started going around the courtyards outside blocks of flats, grabbing anyone they can lay their hands on, including teenagers who were not even protesting. And this has angered people further.

Understanding leaving their home would be followed by detentions, Belarusians shout from their balconies. They ask Lukashenko to leave the power #Minsk #Belarus #belaruselections #Беларусь pic.twitter.com/KnaFs85d0J

Belarusians have shouted from their balconies, swearing and screaming at police to go away. Police have responded by firing rubber bullets at the balconies.

Women have been running up to riot police, imploring them to be civil, begging them to stop their attacks. 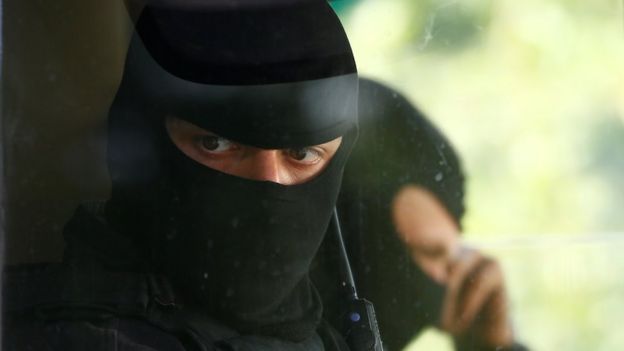 There have been crackdowns before – in 2006 and 2010, although the protests were smaller in scale.

But the level of brutality is shocking and new. Protesters and often passers-by have been targeted by people clad in black, wearing balaclavas and with no insignia or uniform. This happened to a BBC team too.

Although people here are defiant, they are also worried for the future.

Further sanctions on Belarus would push up prices in a country where salaries are already low. There is also the fear of losing your job if you are identified as backing the protests.

No leadership for exiled opposition
But there is a fearlessness too among the largely young protesters. These are mainly ordinary Belarusians, not the hardened opposition supporters we have seen in previous protests, and they have no clear leader.

The old opposition has gone. Some who stood against the president or campaigned for democracy are behind bars, others have fled into exile.

So far the new generation of protesters have no clear demands or political programme, only slogans: “Go away! Long live Belarus! Release the prisoners!”

Some people detained during protests in Belarus are being released from a jail north of Minsk. Tearful relatives wait for their loved ones – many do not know where they are being held and are simply hoping they will emerge. People clap when people are released. pic.twitter.com/SXn5SpOR0b

Svetlana Tikhanovskaya herself was not an opposition leader but a stay-at-home mother whose straightforward approach symbolised people’s desire for change. But she too has gone.

There is still leadership and community here, however. A crowdfunding initiative has collected over $1m (£765,000) for the wounded and for detainees: for food, lawyers’ fees and fines.

The protests were quieter on Wednesday night and Belarusians are now looking to stage walkouts in their workplaces.

Some staff in factories and academic institutes have gone on strike, demanding an end to the violence and calling for Ms Tikhanovskaya to be recognised as the election winner.

Fauci warns: “We are still knee-deep in the first wave of this”