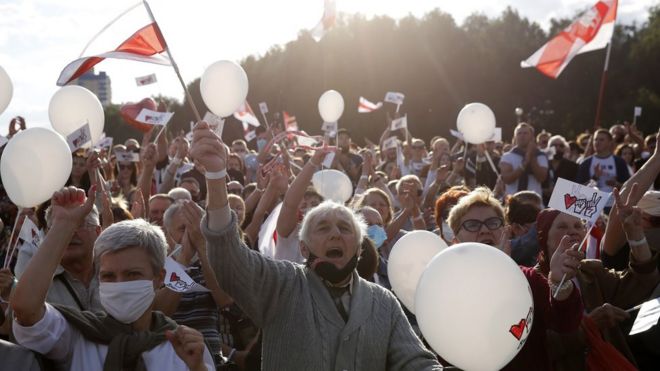 Tens of thousands of people have gathered in Belarus for a rally by the president’s election rival, despite an escalating crackdown on the opposition.

More than 60,000 people demonstrated in the capital, Minsk, according to one human rights group, Viasna.

The rally was organised by Svetlana Tikhanovskaya, who is standing against the long-term president.

Alexander Lukashenko has faced a wave of protests over his bid for a sixth term.

Lukashenko has exerted authoritarian control over Belarus in a style reminiscent of the Soviet era since he took office in 1994.

Ms Tikhanovskaya, a political novice, decided to stand for election after her husband was barred from running and jailed earlier this year.

Her supporters gathered in a square in Minsk for what the AFP news agency said was the largest opposition protest in the ex-Soviet country in a decade.

They waved flags and balloons printed with opposition slogans. 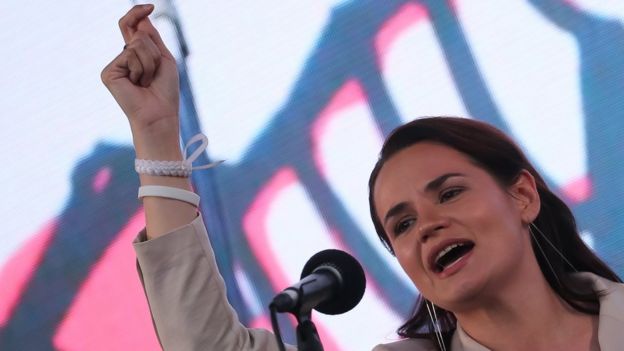 State authorities earlier accused Ms Tikhanovskaya’s husband, Sergei Tikhanovsky, of collaborating with Russian mercenaries to stoke unrest ahead of the election. The popular opposition blogger faces other charges too.

Ms Tikhanovskaya denied the accusations, which came during an intensifying crackdown on opposition activity.

Earlier on Thursday, the authorities arrested 33 suspected mercenaries whom they accused of plotting “terrorism”. Russia said it was seeking clarification over the arrests and denied knowledge of the Wagner paramilitary group which Belarus suspects of involvement.

The secretary of the Belarus Security Council, Andrey Ravkov, said investigators suspected as many as 200 Russian mercenaries had entered the country to “destabilise the situation during the election campaign”.

Mr Ravkov said 14 of the detained Russians had fought in Ukraine’s Donbas conflict, describing their presence in Belarus as a “very unpleasant situation”.

Reports by UN investigators, the US military and journalists have documented Wagner group operations in Ukraine, Syria, Libya, Sudan and the Central African Republic. The Russian government denies any links to the group.

The Belarus state news agency Belta has named all 33 Russian suspects and given their dates of birth.

The state TV channel Belarus 1 showed the Russians being arrested by the Belarus KGB at a sanatorium. The video report (in Russian) said the group had raised suspicions because of their disciplined, military-style behaviour – for example they avoided alcohol.

Video footage of the group’s arrest showed they had Sudanese currency and a Sudanese phone card with them. The Wagner group is known to be active in Sudan, and there is speculation that it was using Belarus as a transit country for African operations.

In Moscow, Kremlin spokesman Dmitry Peskov said on Thursday: “We know 33 Russians were detained yesterday in Belarus. Two hundred are still at large. We do not know of any illegal activity that would be grounds for their detention.”

He also said there was “no such concept” as “Wagner PMC” in Russia.