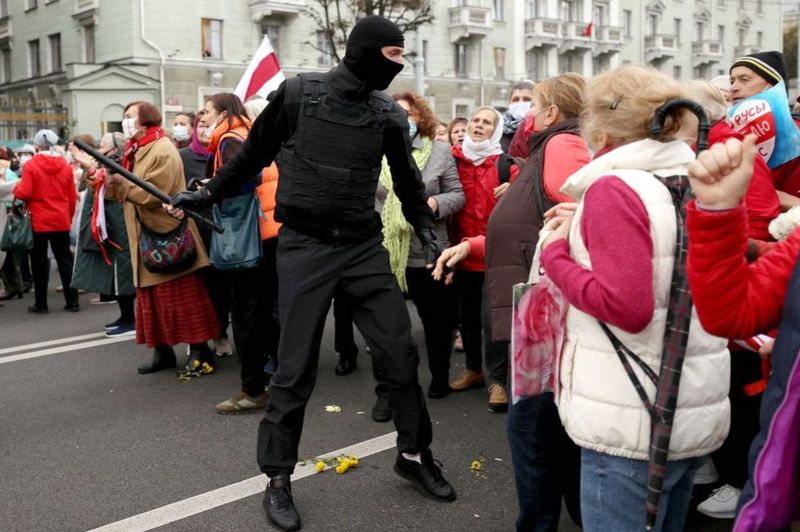 Police in Belarus have been authorised to use lethal force if necessary against anti-government protesters, a senior government official says.

The move was in response to increasingly radicalised, violent anti-Lukashenko groups, he said.

Separately, EU foreign ministers have said they are ready to impose sanctions against President Alexander Lukashenko.

Protests have swept the country since Mr Lukashenko claimed victory in an August poll widely viewed as rigged.

Belarusian authorities have been accused of brutality and torture in their suppression of the mass street protests that followed.

On Monday, the interior ministry confirmed police fired stun grenades and tear gas during an unauthorised rally in the capital, Minsk, which involved a large number of pension-age protesters.

A spokesperson said action was taken after “citizens started to show aggression”. An unconfirmed number of demonstrators were also arrested.

Referring to protests in the city on Sunday, First Deputy Interior Minister Gennady Kazakevich said they had “become organised and extremely radical”, adding they now mainly centred on Minsk and were less widespread.

Whereas protesters hurled stones and bottles in the afternoon, as well as wielding knives, by nightfall they had moved on to building barricades and burning tyres, he said.

“This has nothing to do with civil protests. We’re confronted not just by aggression, but by groups of militants, radicals, anarchists and football hooligans,” he said in a video statement.

“On behalf of the interior ministry, I say that we will not leave the streets and will guarantee the law in the country. Law enforcement personnel and interior troops will use special equipment and lethal weapons if need be.”

European Union foreign ministers meeting in Luxembourg said they were ready to expand sanctions to take in Mr Lukashenko, according to a statement.

Mr Lukashenko was not on the EU’s sanctions list of 40 Belarusian officials agreed on earlier this month.

But the ministers say the president’s refusal to consider new elections as a way out of the crisis leaves the bloc with no choice.

“This is an answer to the evolving situation in Belarus,” EU foreign policy chief Josep Borrell told reporters. “There has not been any kind of signal from the Belarus authorities to engage in any kind of conversation.” 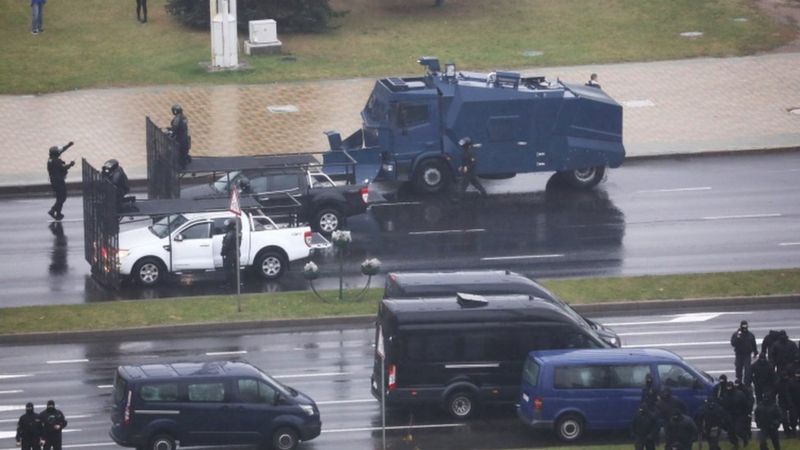 On Sunday, demonstrators turned out across the country for the ninth successive weekend in protest at the disputed re-election of Mr Lukashenko.

Critics of Mr Lukashenko, who has been in power since 1994, said Sunday saw police use some of the most brutal tactics against protesters since the immediate aftermath of the election. Riot police again used water cannon and stun grenades to break up the latest rally in Minsk, and many protesters were beaten with police batons.

More than 700 people were arrested on Sunday, the interior ministry said.

Protesters are demanding the release of all political prisoners and a free and fair re-run of the election.

International observers including the European Union have characterised the demonstrations as peaceful.

The EU, the UK and the US have refused to recognise Mr Lukashenko’s new term. Mr Lukashenko denies fixing the poll and has received support from Russia, his country’s closest ally.

President Vladimir Putin has said he is prepared to send Russian police to help Mr Lukashenko if the protests get “out of control”.

WHO warns virus could kill 190,000 people in Africa