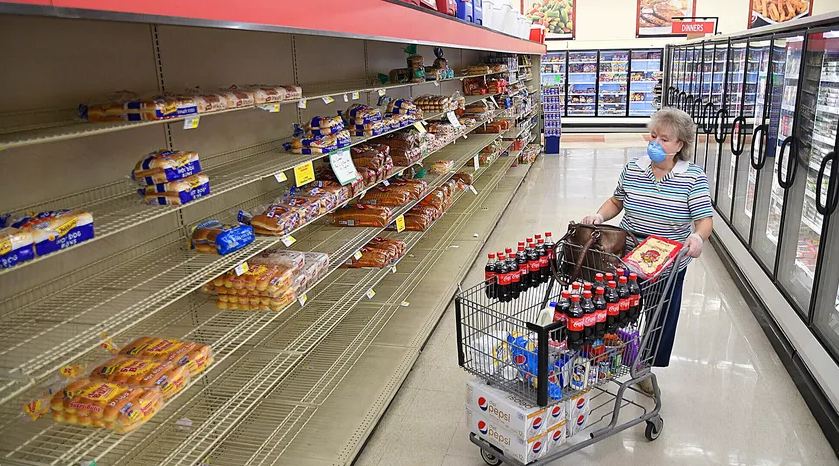 On the day some Americans could begin receiving stimulus checks from the federal government amid the coronavirus pandemic that has eroded the country’s financial footing, the Labor Department reported another 6.6 million initial claims for unemployment insurance.

That’s down just slightly from the the record 6.8 million who sought benefits for the report issued a week ago. Another 3.3 million claims, then a record, were reported two weeks ago.

Also Thursday, astronauts launched for the International Space Station after a “strict quarantine.” And the Trump administration loosened restrictions on essential workers.

The U.S. death toll was nearing 15,000 early Thursday, with more than 430,000 confirmed cases, according to the Johns Hopkins University data dashboard. Worldwide, there are close to 1.5 million confirmed cases and more than 88,500 deaths.

Our live blog is being updated throughout the day. Refresh for the latest news, and get updates in your inbox with The Daily Briefing. More headlines:

• The US has a shortage of face masks amid coronavirus pandemic.A USA TODAY investigation shows why.

•A bridge between life and death: Most COVID-19 patients put on ventilators will not survive

• Are you homeschooling during coronavirus quarantine? Moms, teachers share ideas and advice.

• A side of toilet paper to go? Some restaurants are serving up more than meals during coronavirus crisis.

• Support these brands: Here are 20 retailers that are giving back during the pandemic

Unemployment claims near record as layoffs continue to surge
More than 6.6 million Americans filed unemployment benefit claims for the first time last week, the Labor Department said Thursday, reflecting another surge in layoffs and an economy that has continued to shut down to minimize further contagion. The previous week’s record 6.65 million jobless claims total was revised up by 219,000 to a new all-time high of 6.86 million. Economists had estimated that 5.5 million workers filed initial claims last week, according to a Bloomberg survey. The seasonally adjusted jobless rate was 5.1% for the week ending March 28.

“There are reasons to think this is only the beginning,” says economist Jesse Edgerton of JPMorgan Chase.

Attorney General Barr calls lockdowns ‘draconian’
Attorney General William Barr called the restrictions in effect in many states to mitigate the spread of the coronavirus “draconian” and said Wednesday they should be revisited next month. Asked by Fox News host Laura Ingraham about the balance between religious freedoms and the need to protect people, Barr said the federal government would be “keeping a careful eye” on states’ use of broad powers to regulate the lives of their citizens.

Get the Coronavirus Watch newsletter in your inbox.
Stay safe and informed with updates on the spread of the coronavirus

Delivery: Varies
Your Email
Officials, Barr said, should be “very careful to make sure…that the draconian measures that are being adopted are fully justified, and there are not alternative ways of protecting people.”

Americans could start receiving stimulus payments today
Much-awaited stimulus cash will begin flooding into millions of bank accounts next week in the first wave of payouts to shore up the nation’s wallets. Millions of taxpayers will begin receiving the extra money to pay rent, groceries and other bills next week, or possibly as early as Thursday or Friday. The first group – estimated to cover 50 million to 60 million Americans – would include people who have already given their bank account information to the Internal Revenue Service.

The first group also would include Social Security beneficiaries who filed federal tax returns that included direct deposit information, according to an alert put out today by U.S. Rep. Debbie Dingell, D-Mich. Dingell’s announcement said the expectation is that the first direct deposits would hit in mid-April, likely the week beginning April 13.

US stocks point higher after steady gains; Asian shares mixed
U.S. stocks were poised to gain more ground when markets open Thursday, one day after the Dow Jones industrial Average raced 779.71 points higher to close at 23,433.57. The Standard & Poor’s 500 rose 3.4% Wednesday to end at 2,749.98, driven by gains in beaten down energy, real estate and utility shares. The broad index has jumped nearly 23% since it hit a low two and a half weeks ago.

Shares were mixed in Asia on Thursday after a 3.4% gain on Wall Street as investors chose a positive focus for data about the coronavirus outbreak’s trajectory.

The prospect for progress in talks among oil producers was a big driver of Wednesday’s rally, along with the signs of virus infections leveling off in several global hotspots and increased clarity in the U.S. presidential race, said Adam Taback, chief investment officer for Wells Fargo Private Bank.

Studies suggest virus spread in New York came from Europe
The new coronavirus began spreading in New York in February and came to the area via travelers from Europe, new research suggests. Two separate teams of scientists studying the genetics of the virus came to similar conclusions: People were spreading the virus weeks before the first confirmed case in New York.

“So far, the majority seem to be coming from Europe, and this is in part I think because there was a focus on stopping travel from China,” Adriana Heguy, a geneticist at NYU Grossman School of Medicine, told AFP. Harm van Bakel, a geneticist at Icahn School of Medicine at Mount Sinai who led the other research team, told the New York Times: “The majority is clearly European.”

The first case of the new coronavirus confirmed in New York came on March 1. On Jan. 31, President Donald Trump said he would restrict entry to the United States from those traveling from China. On March 11, Trump said he was restricting travel from Europe.

Another potential coronavirus vaccine, this time without the deep injection
Another trial is underway to test the safety of a possible vaccine for the new coronavirus, and those who fear needles may be in luck: It uses a skin-deep shot that would feel like a small pinch instead of a deep jab. The trial aims to give 40 healthy volunteers in Philadelphia and Kansas City, Missouri, two doses of the potential vaccine, INO-4800, four weeks apart.

Similar to another clinical trial that began testing for safety in Seattle last month, the potential vaccine does not rely on using the virus itself. Inovio Pharmaceuticals’ trial, instead, injects a piece of synthetic DNA with a section of the virus’ genetic code. The Seattle trial relies on messenger RNA. After the shot, volunteers are given a brief electrical pulse that allows the synthetic DNA to more easily enter the body.

Dozens of other potential vaccines are being developed around the world, but it could be more than a year to 18 months before a vaccine is widely available, public health officials have said.

Italian PM: COVID-19 could break EU; Italy may soon ease lockdown
The European Union could collapse if it fails to come together over financial challenges presented by the coronavirus, Italy’s prime minister said. Giuseppe Conte and some other EU leaders are pressing more frugal members of the bloc to issue so-called “corona bonds” – sharing debt that all EU nations would help to pay off. The Netherlands is among nations that have opposed the plan.

“If we do not seize the opportunity to put new life into the European project, the risk of failure is real,” Conte told the BBC.

Conte also said Italy may start to gradually ease the world’s most restrictive national lockdown. The number of new COVID-19 cases, hospitalizations and deaths have started to decline across the country in recent days. Italy has reported more than 17,000 deaths, the most of any nation, and almost 140,000 confirmed cases.

Astronauts blast off for ISS despite pandemic
The coronavirus pandemic is forcing people to stay home, but three astronauts are set to experience a different type of isolation and quarantine – in space. NASA astronaut Chris Cassidy and his fellow crewmates, Russia’s Anatoly Ivanishin and Ivan Vagner, blasted off aboard the Soyuz MS-16 spacecraft at 4:05 a.m. ET from Kazakhstan for a six-hour journey to the International Space Station.

Russian space officials have taken extra precautions to protect the crew during training and pre-flight preparations as the coronavirus pandemic has swept the world. Speaking to journalists via video link Wednesday, Cassidy said the crew has been in “a very strict quarantine” for the past month and so in good health. “We all feel fantastic,” he said.

British Prime Minister Boris Johnson makes ‘steady progress’
Prime Minister Boris Johnson spent a third night in intensive care being treated for coronavirus and is in stable condition and “improving,” his office said. Johnson had a “good night” in the hospital, a Downing Street statement said. However, Britain’s leader, 55, is still on oxygen and has handed over day-to-day operations of his government Foreign Secretary Dominic Raab.

Johnson’s wife, Carrie Symonds, is pregnant and also suffered symptoms consistent with the coronavirus. Earlier this week, Symonds tweeted that she was feeling stronger and “on the mend.”

More coronavirus news and information from USA TODAY
• Does COVID-19 have new symptoms? We checked the facts, and it’s true.

• Your coronavirus questions, answered: How many people have recovered? Do I need to wear gloves, too? Does UV light kill COVID-19?

• Toilet paper production is 24/7 these days. So, why can’t we find it at stores?

• Black people are overwhelmingly dying from coronavirus. Nobody knows why.

• Is coronavirus spreading ‘quickly’ on gas pumps: Here are the facts.

Feds loosen virus rules to let essential workers return
In a first, small step toward reopening the country, the Trump administration issued new guidelines to make it easier for essential workers who have been exposed to COVID-19 to get back to work if they do not have symptoms of the coronavirus.

Dr. Robert Redfield, director of the the Centers for Disease Control and Prevention, announced Wednesday at the White House that essential employees, such as health care and food supply workers, who have been within 6 feet of a confirmed or suspected case of the virus can return to work under certain circumstances if they are not experiencing symptoms.

Here's the racial breakdown of coronavirus victims in New York