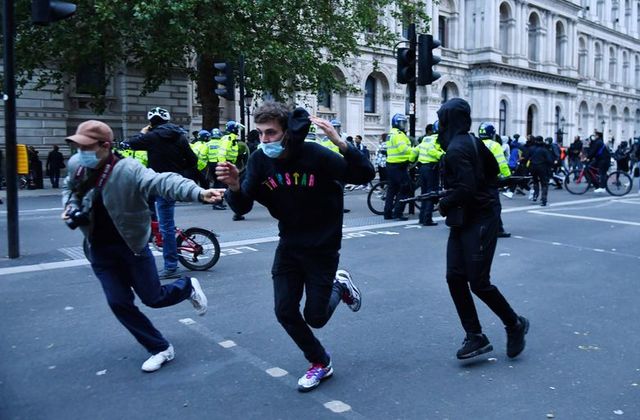 Prime Minister Boris Johnson has said anti-racism protests at the weekend were “subverted by thuggery” after some demonstrators clashed with police.

He said people had the right to protest but engaging in violence was a “betrayal” to the protesters’ cause.

Thousands of people attended largely peaceful demonstrations in cities across the UK at the weekend.

Paulette Simpson, director of The Voice newspaper, said violence was regretful but had not hijacked the protests.

Unrest in London on Sunday led to eight officers being injured and 12 people being arrested.

In Bristol, police confirmed there would be an investigation into “criminal damage” of a statue of Edward Colston – a prominent 17th Century slave trader – which was ripped down by protesters in a move Home Secretary Priti Patel condemned as “utterly disgraceful”.

While the Metropolitan Police’s Supt Jo Edwards said following a “predominantly peaceful protest” in the capital, officers were faced with “scenes of violence and disorder” which were “entirely unacceptable”. 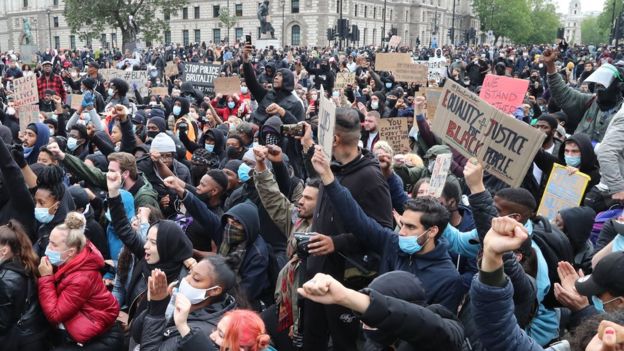 The majority of the arrests in London were for public order offences and one for criminal damage.

Mr Johnson condemned the violence, posting on Twitter: “People have a right to protest peacefully & while observing social distancing but they have no right to attack the police. These demonstrations have been subverted by thuggery – and they are a betrayal of the cause they purport to serve. Those responsible will be held to account.”

Ms Simpson, the director of one of Britain’s top black newspapers, said people had a “legitimate right” to protest issues that have “reached boiling point”, but urged people “to restrain themselves” and to try to “contain” their emotions.

She said she did not feel the violence had “hijacked” the protests’ message, but appealed to people not to do so.

Ms Simpson questioned why, in 2020, we still have statues, symbols and names of streets “that remind us of a very dark place in history”, and urged the government and others to “listen” to those who call for their removal.

It was because of a “lack” of listening and action that “people feel compelled in a pandemic to go and demonstrate”, she added.

Thousands of protesters gathered on Saturday and Sunday in London, as well as cities across the UK including Bristol, Manchester, Wolverhampton, Nottingham, Glasgow and Edinburgh.

Protests were generally peaceful, with aerial footage showing thousands of demonstrators flooding the roads outside the US embassy in Vauxhall, south London, before marching towards Parliament Square and Downing Street.

But as darkness fell, lines of police in riot gear took up positions to contain a small group of protesters in Westminster, the BBC’s Tom Symonds said.

Bottles were thrown at officers and police issued a Section 35 dispersal order for the City of Westminster, in place from Sunday evening until 06:00 on Monday, compelling people to leave the area. 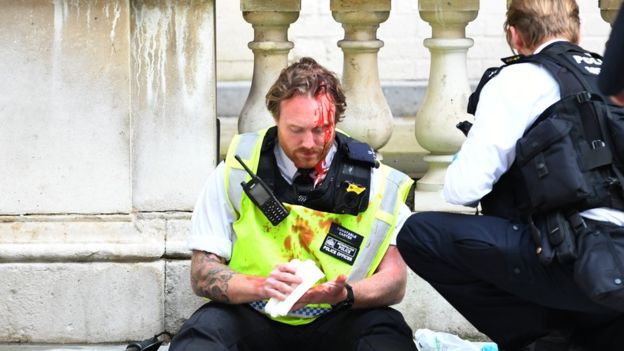 And in Warwickshire, protesters caused the closure of the M6 for around an hour following on from the demonstrations in Coventry city centre.

John Apter, national chairman of the Police Federation, said while he understood there was “an awful lot of anger and frustration” his “concern and sadness” was that the “legitimate message” of the protests had been “hijacked by some who are intent on violence” against police.

He told BBC Breakfast it was “unforgivable” that some people have been “laughing and joking” about violence faced by police – and warned it could lead many people to “lose sympathy” for the protests.

Slave trader’s statue torn down
On Sunday protesters in Bristol used ropes to pull down the bronze statue of Colston, who has been a source of controversy in the city for many years – his legacy can still be seen on Bristol’s streets, memorials and buildings.

After the statue was toppled, a protester was pictured with his knee on the figure’s neck – reminiscent of the video showing George Floyd, the black man who died while being restrained by a Minnesota police officer.

The statue was later dragged through the streets of Bristol and thrown into the harbour. The empty plinth was used as a makeshift stage for protesters. 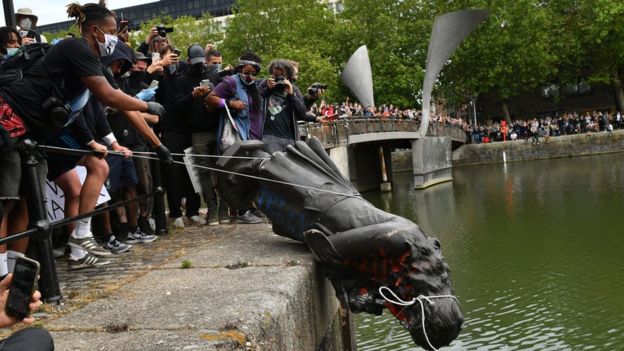 Bristol mayor Marvin Rees said as an elected politician he could not condone criminal damage, but as a man “of Jamaican heritage” he felt no “sense of loss” for the statue.

He told BBC Radio 4’s Today programme: “I cannot pretend it was anything other than a personal affront to me to have it in the middle of Bristol, in the city in which I grew up.”

Elsewhere, in Parliament Square, the statue of Sir Winston Churchill was sprayed with graffiti, and a Black Lives Matter sign was attached – an act described as “stupid and counterproductive” by foreign office minister James Cleverly.

How George Floyd’s death resonated in the UK
Crime and policing minister Kit Malthouse told BBC Breakfast there was “no doubt” people would be arrested following the “disgraceful acts of vandalism and desecration”.

Asked whether the protests should have been prevented from taking place, he said No 10 had made it “very clear” beforehand that they breached coronavirus lockdown rules – but that the “strength of feeling” over Mr Floyd’s death meant “people were going to come anyway”. 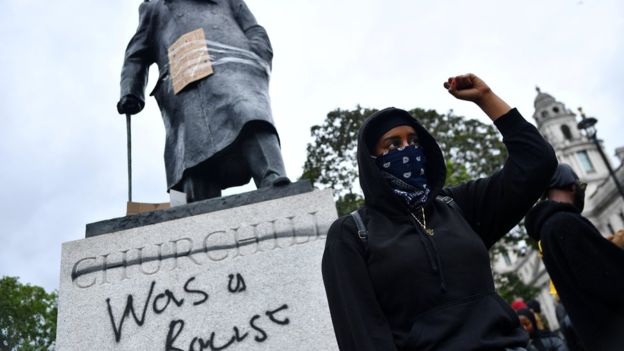 Meanwhile, opposition MPs have criticised comments made by Health Secretary Matt Hancock that protests were fuelled by events in America “rather than here”.

Shadow justice secretary David Lammy said that racism and prejudice exist in the UK, as well as across the Atlantic, and that to suggest there is only a problem in the US “shows real ignorance”.

Mr Lammy tweeted: “People in this country are not only showing solidarity with George Floyd and other African Americans. We must turn this moment into one of change and justice in the UK too.”