Home > News > World > Brett Crozier, tested positive for coronavirus before he was removed from command, according to a report. 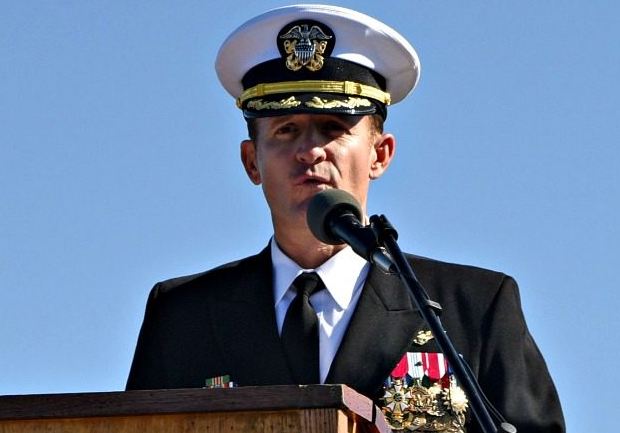 Crozier began exhibiting symptoms before he was removed from the ship on Thursday, the New York Times reported on Sunday morning, citing two of Crozier’s close friends.

Navy Secretary Thomas Modly fired Crozier on Thursday, after a memo he wrote urging Navy leaders to get sailors off the ship faster in Guam due to a coronavirus outbreak leaked to the San Francisco Chronicle, Crozier’s hometown paper.

Modly said Crozier was not fired for raising concerns, but for emailing the memo over an unsecured and unclassified system and cc’ing more than 20 people, including some outside the chain of command, and for not bringing his concerns to his direct superior, who lived on the ship down the hallway from him.

Videos emerged on Friday of Crozier exiting the ship, and hundreds of crew members gathered together cheering, “Captain Crozier!”

Until the Times‘ report on Sunday, there was no indication that Crozier himself had tested positive for coronavirus, or was exhibiting symptoms himself.

It is not clear whether he had those symptoms at the time of his writing the memo, which was dated Monday, March 30. The memo leaked to the Chronicle the next day, Tuesday, March 31. Crozier was fired on Thursday, April 2.

“It is unclear when he was first tested for Covid-19 or when he received his results,” according to the Times.

A Navy spokesman told the Times that Crozier has been reassigned to the headquarters of the Naval Air Forces Pacific command in San Diego, but that he must complete a quarantine period first in Guam.

Democrat leaders on the House Armed Services Committee criticized Crozier’s removal as an “overreaction,” although they conceded that he “clearly” went outside the chain of command and “did not handle the immense pressure appropriately.”

Joe Biden has called Crozier’s firing “close to criminal” and has blamed the “Trump admin” despite the decision being Modly’s own.

“I think he should have a commendation rather than be fired,” he said.

President Trump on Friday said he backed Modly’s decision, and said the ship should have never stopped on a port visit to Vietnam just several weeks ago.

Navy leaders have previously defended that decision, saying there were only 16 known cases of coronavirus further up north at the time.

Coronavirus: Italy approves use of drones to monitor social distancing