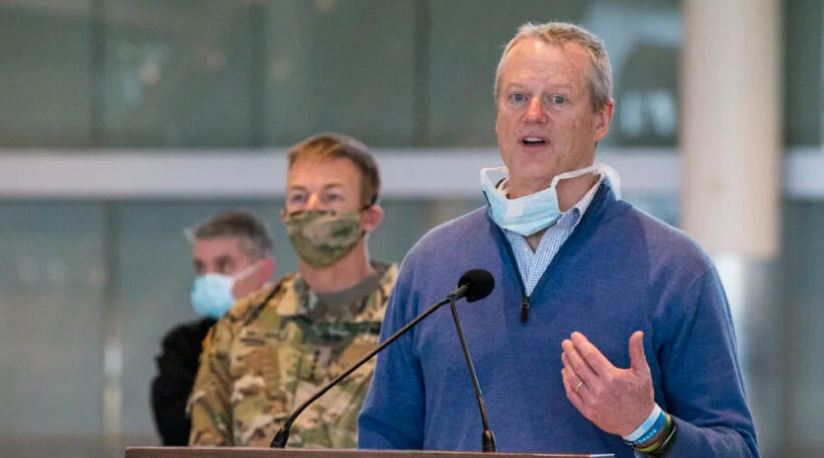 Massachusetts may be considered a hotspot of the coronavirus outbreak in the United States, but the state’s surge in cases hasn’t been as bad as some initially feared, according to Gov. Charlie Baker.

“While it is bad, there’s no question about that, it’s nowhere near as bad as a lot of people said it was going to be at the beginning,” Baker said during a press conference Tuesday afternoon.

“I do take some hope in that,” the governor added.

His comments came amid evidence that Massachusetts is potentially flattening the curve at a time when officials projected the state’s surge in coronavirus to ease. Though the number of positive COVID-19 cases in the state broke 40,000 on Tuesday, the number of new daily infections has declined each day since last Thursday.

That said, Baker — who announced Massachusetts schools will remain closed through the spring — says it’s too early to draw any conclusions from the somewhat noisy data.

The governor noted that the number of new confirmed cases is partially a function of how many new tests are conducted, which differs each day. According to state data, the percentage of positive tests each day has consistently hovered between 26 percent and 30 percent since April 6 — with the exception of Saturday and Monday, on which the rates dropped to 24 percent and 22 percent, respectively.

The number of new deaths due to COVID-19 in Massachusetts has also recently declined, dropping below 100 for the first time this weekend since April 8. And after a significant jump on April 13, coronavirus hospitalizations in the state have only slightly increased over the past week — from 3,616 last Tuesday to 3,872 this Tuesday.

At the beginning of the month, state officials projected the number of hospitalizations due to COVID-19 would peak in Massachusetts between April 10 and April 20. During an interview Monday, the initially projected endpoint, Baker said the Massachusetts health care system “is not going to be overwhelmed” by the disease, as some had previously feared.

“Everyone has adjusted downward dramatically from where they thought we were going to end up,” Baker said, referring to the projections.

As The Boston Globe reported Monday, several modeling teams say Massachusetts is on pace to avoid worst-case scenarios. A modeling team at Massachusetts General Hospital projects that the caseload of COVID-19 patients across its network has plateaued, while an influential group at the University of Washington has since downgraded its bleak projection of 8,219 deaths due to the disease in Massachusetts through Aug. 4 to about 3,200.

“The curve is flattening even more and it is due to all the many community- and government-based efforts to minimize the spread,” Dr. Peter Dunn, a vice president overseeing inpatient capacity management at Mass. General, told the Globe.

Baker stressed Tuesday that any positive trends were not in spite but because of the aggressive social distancing measures that the state has implemented — and that, for the most part, residents have done a “pretty good” job following.

“The work that people did — as painful and as difficult as it was — was absolutely purposeful with respect to what we were seeking to achieve, which was a change in the dynamic, based on the early trends, that appeared here,” the governor said. “That tends to get lost in the midst of the difficulty associated with what everybody’s working through.”

Baker — who has spoken emotionally about missing time with his 91-year-old dad due to the social distancing guidelines — said he understood “on a very personal level” the desire for things to return to normal. But as the focus begins to shift toward incrementally reopening the economy, the governor reiterated that he remained focused on managing the surge and that it was no time for residents to get complacent. His emergency order forcing nonessential businesses to close their workplaces, as well as the state’s stay-at-home advisory, are officially set to expire on May 4, at the earliest.

“This is like the third or fourth quarter, and we’re holding our own here,” Baker said toward the end of his press conference Tuesday.