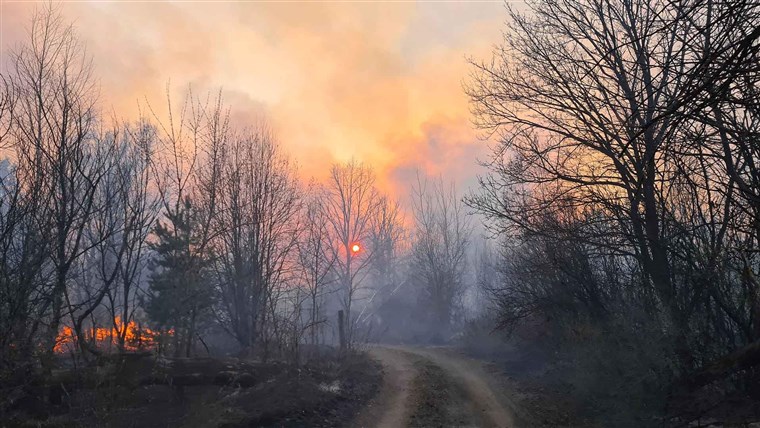 Radiation levels near the site of the Chernobyl nuclear reactor disaster have spiked as firefighters battle to contain two forest fires in the area.

A fire covering around 50 acres broke out on Saturday afternoon near the village of Vladimirovka, within the uninhabited Chernobyl exclusion zone, and responders were still fighting two blazes on Monday morning, Ukrainian emergency services said in a statement.

“There is bad news — in the center of the fire, radiation is above normal,” Egor Firsov, head of Ukraine’s ecological inspection service, wrote in a Facebook post alongside a video of a Geiger counter. “As you can see in the video, the readings of the device are 2.3, when the norm is 0.14. But this is only within the area of the fire outbreak.”
His measurements refer to the microsievert per hour (μSv/h) reading; the maximum allowable amount of natural background radiation is 0.5 μSv/h, the emergency services said, but Firsov’s reported amount was nearly five times that.

A total of 124 firefighters, two An-32P planes and an Mi-8 helicopter are battling the largest blazes, and have carried out 42 water drops on the area. Another 14 firefighters were battling a smaller blaze of around 12 acres, the emergency services said.
However, the spike in radiation levels does not appear to extend to Kiev, the Ukrainian capital, or to the city of Chernobyl itself, where authorities say radiation levels remain normal.
Another image of a Geiger counter near the fire, taken on Sunday, showed a reading just below the maximum permissible amount. 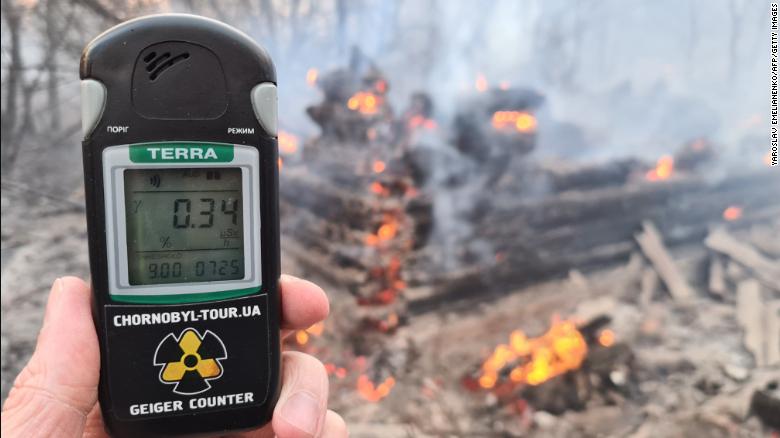 Vladimirovka sits within the deserted 1,000-square-mile exclusion zone, which was evacuated after the devastating 1986 blast at the Chernobyl Nuclear Power Plant that sent radioactive fallout billowing across Europe and exposed millions to dangerous levels of radiation.

The region has since been taken over by nature, and forest fires are not uncommon.
“The problem of setting fires to grass by careless citizens in spring and autumn has long been a very acute problem for us,” Firsov wrote. “Every year we see the same picture — fields, reeds, forests burn in all regions.”

He called for new legislation to impose harsher penalties for anyone caught starting fires in the area. “There are relevant draft bills. I hope they will be voted in. Otherwise, large-scale fires will continue to occur every autumn and spring,” he wrote.