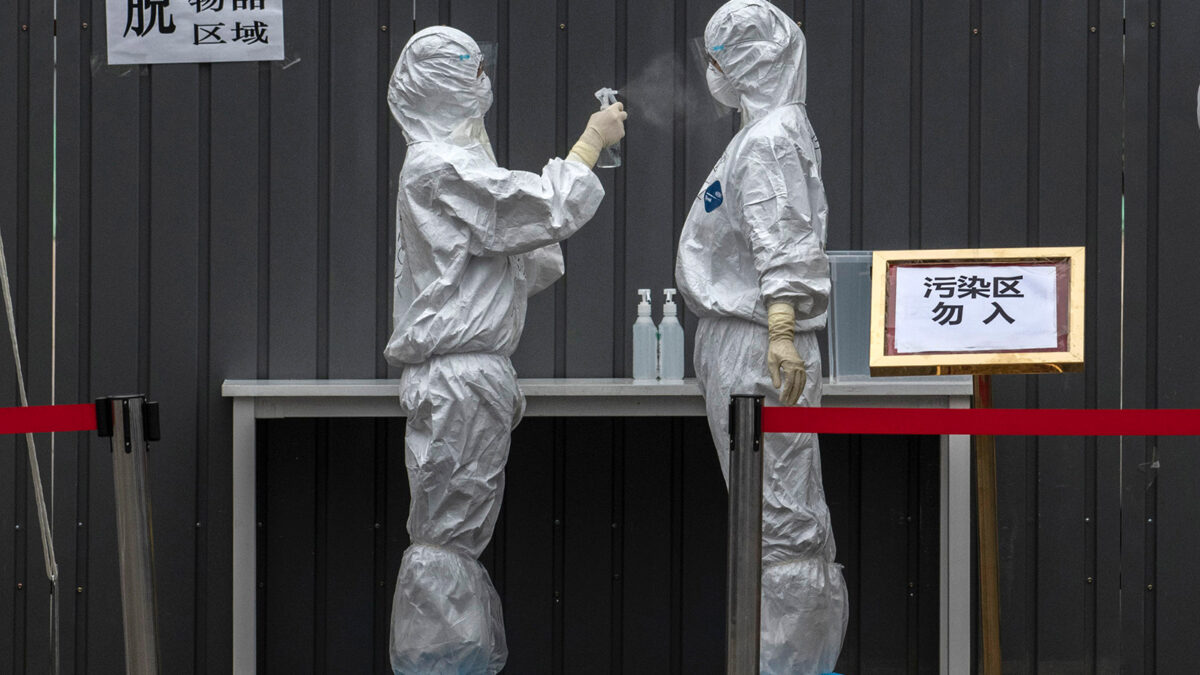 BEIJING, CHINA - JUNE 24: Chinese epidemic control workers wear protective suits as they disinfect each other after performing nucleic acid swab test for COVID-19 on citizens at a government testing site in Xicheng District during an organized tour on June 24, 2020 in Beijing, China. While Chinese government medical officials have said they believe they have controlled the spread, authorities are trying to contain the outbreak linked to the Xinfadi wholesale food market, Beijing's biggest supplier of produce and meat. More than 2.5 million people have undergone nucleic acid tests for COVID-19 at dozens of sites across the city in recent days, with officials using contact tracing to target high and middle risk areas and people who may have had contact with the market or food that came from there. Several neighborhoods have been locked down and a number of other food markets have been closed, The outbreak has triggered fears of a second wave of infection after 56 straight days with no domestically transmitted cases in the capital. (Photo by Kevin Frayer/Getty Images)

This is the second consecutive day that China has reported the highest number of local cases since March 6. On Monday, the country reported 57 new local infections for Sunday.

Among the 64 locally transmitted cases reported on Tuesday, 57 were in Xinjiang, six in Liaoning, and one in Beijing. China also reported a further 34 new asymptomatic infections, which are not included in its overall tally.

The far western region of Xinjiang has seen a fresh coronavirus outbreak in its capital Urumqi since July 15, after nearly five months of no new cases.

The total number of confirmed infections across China now stands at 83,959, according to the National Health Commission. The death toll remains at 4,634.

At least 150 Italian doctors have died from coronavirus