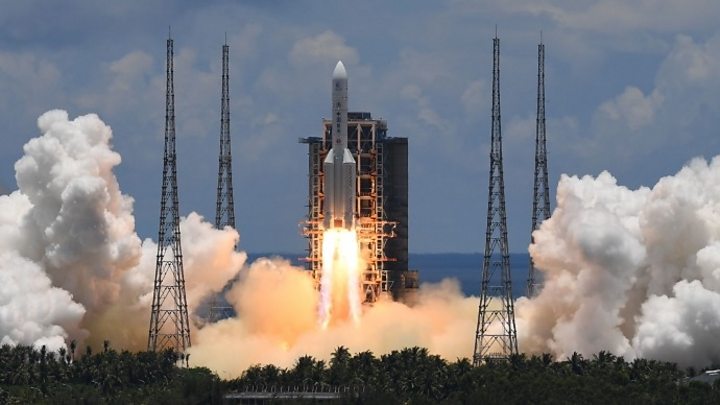 China has launched its first rover mission to Mars.

The six-wheeled robot, encapsulated in a protective probe, was lifted off Earth by a Long March 5 rocket from the Wenchang spaceport on Hainan Island at 12:40 local time (04:40 GMT).

It should arrive in orbit around the Red Planet in February.

Called Tianwen-1, or “Questions to Heaven”, the rover won’t actually try to land on the surface for a further two to three months.

This wait-and-see strategy was used successfully by the American Viking landers in the 1970s. It will allow engineers to assess the atmospheric conditions on Mars before attempting what will be a hazardous descent.

Tianwen-1 is one of three missions setting off to Mars in the space of 11 days.

On Monday, the United Arab Emirates (UAE) launched its Hope satellite towards the Red Planet. And in a week from now, the US space agency (Nasa) aims to despatch its next-generation rover, Perseverance.

Zhang Xueyu, the Hainan base commander, told jubilant mission technicians that the launch had proceeded entirely according to plan.

“According to the aerospace control centre, the Long March 5 Y-4 rocket is in normal flight, and the probe to Mars has accurately entered the preset orbit. I now declare the launch of China’s first Mars exploration mission a complete success,” he said. 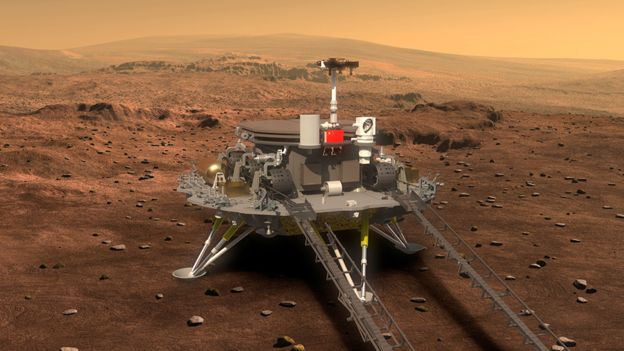 The targeted touchdown location for the Chinese mission will be a flat plain within the Utopia impact basin just north of Mars’ equator. The rover will study the region’s geology – at, and just below, the surface.

Tianwen-1 looks a lot like Nasa’s Spirit and Opportunity rovers from the 2000s. It weighs some 240kg and is powered by fold-out solar panels.

A tall mast carries cameras to take pictures and aid navigation; five additional instruments will help assess the mineralogy of local rocks and look for any water-ice.

This surface investigation is really only half the mission, however, because the cruise ship that is shepherding the rover to Mars will also study the planet from orbit, using a suite of seven remote-sensing instruments.

The historic statistics for the exploration of the Red Planet are well known: about a half of all ventures have failed. Indeed, China’s first effort to send a satellite, Yinghuo-1, to the dusty world stalled in Earth orbit when its Russian carrier stage failed and fell back towards the Pacific Ocean.

So far, only the Americans have managed to run long-lived operations on Mars (the Soviets’ Mars-3 and Europe’s Beagle-2 missions got down but failed shortly after).

China, however, can take confidence from the successes of its two recent Chang’e Yutu lunar rovers, the second of which made the first ever soft landing on the far side of the Moon last year.

The country’s engineers will believe they are now ready to tackle the infamous “seven minutes of terror” – the time it takes for a spacecraft to make the perilous trip from the top of Mars’ atmosphere to the ground.

“Entering, deceleration and landing (EDL) is a very difficult (process). We believe China’s EDL process can still be successful, and the spacecraft can land safely,” mission spokesperson Liu Tongjie was quoted as saying ahead of launch by the Reuters news agency.

Tianwen-1 will use a combination of a capsule, parachute and a retro-rocket to burn off entry speed and slow itself to a stop right at the surface. If all goes well, the landing mechanism will then deploy a ramp to enable the rover to begin its traverse across the Martian plain.

Chinese scientists would like to get at least 90 Martian days of service out of the robot. A day, or Sol, on Mars lasts 24 hours and 39 minutes.

Dr Rain Irshad is autonomous systems leader at RAL Space in the UK and is involved in Nasa’s Insight lander on Mars.

“It’s incredibly exciting to see what China is doing,” she commented.

“Their space agency was only formed in 1993, and yet here they are, less than 30 years later, sending an orbiter, a lander and a rover to Mars.

“But they put themselves through a training programme with their Chang’e missions at the Moon. It’s been very impressive the way they’ve been banging out the lunar missions one after the other,” she told BBC News. 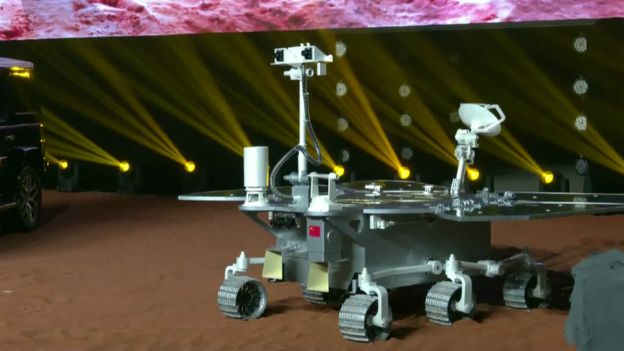 China calls racial discrimination in the US a “social ill”