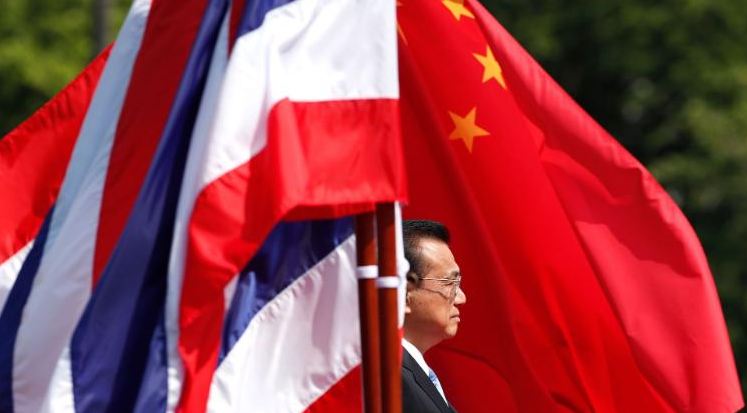 After Thai actor Vachirawit Chivaaree liked a photo on Twitter that listed Hong Kong as a “country,” Chinese fans inundated his Instagram and other social media with comments “correcting” him, and he soon posted an apology for his “lack of caution talking about Hong Kong,” which is a semi-autonomous Chinese city, and not an independent nation.
Vachirawit, who goes by the name “Bright,” was not the first foreign celebrity or brand to cause offense in China by mischaracterizing issues related to Hong Kong or Taiwan, or by crossing numerous other political red lines familiar to those within China’s Great Firewall.
Nor was he the first to try to apologize, only to have more alleged transgressions dredged up by nationalist Chinese web users looking for a new scalp.
For years, Chinese internet nationalists have leapfrogged the Great Firewall to go after the country’s critics on banned social media sites like Facebook and Twitter. They’ve attacked pages run by the Taiwanese government, pro-Uyghur groups, and businesses deemed to have offended China, inundating them with abusive posts and clogging up their timelines.
How Chinese internet trolls go after Beijing's critics overseas
How Chinese internet trolls go after Beijing’s critics overseas
Following Vachirawit’s apology, comments from users on Weibo, a Chinese social media platform, found additional posts by him they disapproved of, as well as comments by his girlfriend, who goes by the name Nnevvy online, in which she appeared to endorse Taiwanese independence (or at least that the island was distinct from mainland China).
They called for a boycott of Vachirawit and his TV show, “2gether,” and some began posting attacks against his girlfriend on both Weibo and Twitter under the hashtag #nnevvy.
On the Chinese platform, the hashtag attracted more than 1.4 million posts, and some 4 billion views, according to the Global Times, a state-backed tabloid. “There is no such thing as an idol when it comes to the important matters of our country,” the paper quoted one popular post stating.
The expression of similar sentiments on Twitter were met with pushback by Thai fans, who quickly found themselves targeted by the Chinese users, who posted insults demeaning the southeast Asian country and its government. But here the users, used to debating within the limits of the Great Firewall, revealed something of how limited their political worldview is by censorship and propaganda.
In seeking to insult the Thais they were arguing with, they turned to the worst topics they could imagine, but instead of outrage, posts criticizing the Thai government or dredging up historical controversies, were met with glee by the mostly young, politically liberal Thais on Twitter.
“Say it louder!” read one post, after trolls shared photos of the Thammasat University massacre, in which government troops opened fire on leftist student protesters in 1976. Other Thais posted memes laughing at the futility of Chinese trolls attempting to insult them by attacking a government they themselves spend most of their time criticizing.
Hong Kong and Taiwanese posters soon joined in, with former Hong Kong lawmaker Nathan Law writing, “so funny watching the pro-CCP (Chinese Communist Party) online army trying to attack Bright. They think every Thai person must be like them, who love Emperor Xi (Chinese President Xi Jinping). What they don’t understand is that Bright’s fans are young and progressive, and the pro-CCP army always make the wrong attacks.”