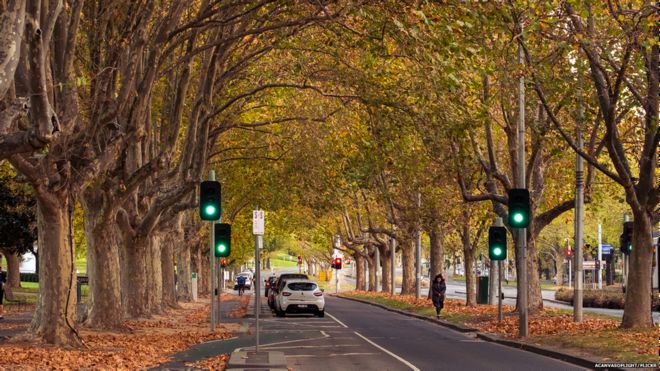 Many cities around the globe are struggling to reconcile ambitious environmental targets with development pressures, a study has suggested.

Scientists in Melbourne recorded a net gain in street tree cover but a net loss in parks and private land.

The Australian team says measures to protect mature trees are “critical” if the urban forest’s cover is to be enhanced in the future.

The findings appear in the Sustainable Cities and Society journal.

Globally, the role of trees in towns and cities are well recognised, such as providing shade during hot summer months, and helping to absorb noise pollution and floodwater.

The team of researchers in Australia examined the plight of trees in the city of Melbourne in the decade between 2008 and 2017.

Losing young ones
The team said the most frequently removed trees from public parks and streets were small ones, with trunk diameters less than 15cm.

They identified that trees near to developments were among the most at-risk trees. 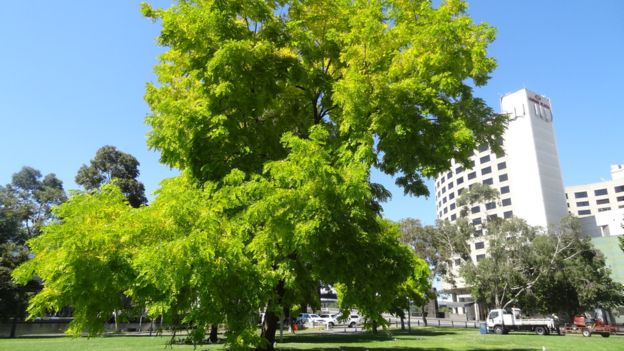 “Almost 2,000 street trees were removed within 10m of major development sites, equivalent to almost 20% of all street trees removed… but this only constituted only 8% of streetscape tree canopy cover losses,” they wrote.

Co-author Thami Croeser, a PhD student at the Centre for Urban Research at RMIT University in Melbourne, Australia, said they were able to record the size of trees removed in Melbourne.

“We found that most of them were quite young,” he said.

“Only about one-in-20 was a mature tree thicker than 60cm [diameter].”

He told BBC News: “Overall, the tree canopy cover in the inner city stayed just ahead of losses to development.

“Our parks lost canopy, as did private properties, but canopy from street trees grew slightly on balance.”

He suggested this was a result of officials in Melbourne operating a strong tree protection policy – it can cost tens of thousands of Australian dollars to remove a large, mature tree. This seems to act as an effective disincentive.

Melbourne city officials also operate a considerable planting programme, with about 3,000 new trees being put into the ground each year.

“This offsets the losses somewhat,” observed Mr Croeser, “although replacing a 20-year-old tree with a sapling definitely is not the same, the sheer volume of planting helps.”

Melbourne is well-known as a tree city. Officials had tagged every tree in the city and gave each one an individual email address. The scheme was set up so that people could report problems or concerns. Instead, people sent affectionate notes to the gums, oaks and elms.

Siege of Sheffield
While some cities are supportive of trees, and the benefits they provide – such as mitigating the urban heat island effect, providing habitats for insects, animals and birds, and improving our sense of wellbeing – other cities have fallen foul of angry protesters and residents.

Sheffield, in the UK, is considered to be one of the nation’s greener cities. Yet the council undertook a widespread programme of street tree removals in 2017.

The strategy of the council’s “Streets Ahead” strategy – under which about 5,500 trees have been removed since 2012 and replaced with saplings – said that felling was only considered as a “last resort”.

But residents and protesters said that trees that did not need to be felled were being cut down. Tensions and tempers rose. Protests were staged. People were arrested.

The stand-off resulted in widespread media coverage. An investigation by the UK’s local government ombudsman found that Sheffield council had misled residents. The council accepted the findings and issued apologies to the residents.

Tree canopy cover in England’s towns and cities is, on average, 16%. A citizen science project, Forest Research – in partnership with Tree for Cities and Brillianto – found that the cover in 283 urban conurbations ranged from 3% to 45%.

Explaining the motivation for the UK-wide map of urban tree cover, Forest Research said: “Urban trees are being increasingly recognised for the many benefits they provide, such removing carbon dioxide and pollutants from the air, providing habitats for wildlife, and making our urban areas more attractive, enjoyable and healthy places to be.”

As the issue of climate change forms a central pillar of government policies, many cities are setting targets to boost their urban tree canopy cover.

Growing ambitions
In the last UK General election, the government – in its manifesto – pledged to plant an additional 75,000 acres of trees each year by “the next Parliament” – in other words, by 2024. In order to deliver this ambitious target, councils in urban areas would be expected to help deliver this goal.

At the World Forum on Urban Trees, held in Italy during 2018, delegates issued a call for action to highlight the benefits of trees in cities.

More than half of the world’s population now live in urban areas, and this is forecast to grow to 68% by the middle of the 21st Century.

While is it widely accepted that tree cover can improve people’s daily wellbeing, Thami Croeser said the Melbourne study highlighted a few factors for tree officers around the globe.

“Many cities measure the number of trees they plant as their main target for urban forests,” he told BBC News.

“That’s not actually the real challenge; it a matter of planting them and keeping them alive and healthy.”

He said that tree canopy targets were a good idea because they focused “on the cover that trees give us, rather than planting numbers.”

Irish government under fire over COVID-19 deaths in care homes