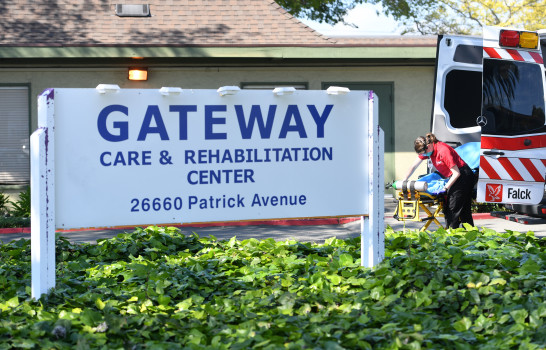 HAYWARD – A 10th patient at Gateway Care and Rehabilitation Center in Hayward died of COVID-19 on Monday night.

“My grandma was a beautiful, hard working woman who did not deserve to go through this. And we will hold those responsible for this accountable. But now is not the time for that,” Jaime Patiño said.

“Now is the time to grieve, mourn and celebrate her life and all she gave us,” he said.

Jaime Patiño told KGO-TV his grandmother was taken to the hospital and put on oxygen Friday. Within 72 hours, doctors increased the amount from 30 percent to 72 percent.

The hospital scheduled one last group phone call between family members and Emma Patiño before her death at 8:28 p.m.

On Monday, civil rights attorney John Burris announced plans to investigate the situation at Gateway. His firm has been hired by the family of 87-year-old Costell Akrie, another patient who died at the facility. It was revealed last week that at least 66 people at Gateway have contracted the virus – the biggest outbreak among nursing homes in the Bay Area.

“If the recent news reports are true, that Gateway Center was understaffed, without the necessary protective gear such as masks and gloves, and the sick staff was compelled to work, it is unconscionable,” Burris said in a statement.

East Bay health officials on Monday announced that residential care and other licensed healthcare facilities have been ordered to screen all employees and visitors for signs of illness and make them wear masks. The order also requires them to “minimize” the use of employees who work at multiple facilities, and to keep records of any employees who worked at another healthcare facility during the previous two weeks.

Beginning Tuesday, those facilities have to keep out visitors and staff who have had any symptoms of respiratory illness or fever in the previous week or who have a temperature of 100 degrees Fahrenheit or higher.