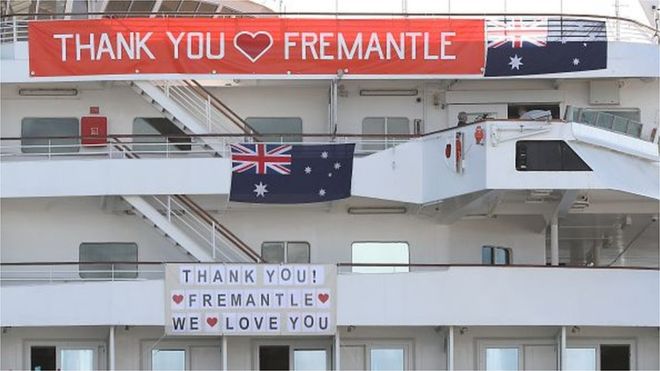 A German cruise ship is defying orders to leave a port in Western Australia following a coronavirus outbreak onboard, local media report.

The Australian Border Force ordered the Artania to depart Fremantle after most of the ship’s passengers were evacuated and flown home.

But around 450 people remain on board, most of them crew.

They are reportedly asking to remain docked for another two weeks to ensure there are no further cases.

Dozens of people travelling on the ship were found to have contracted coronavirus and are being treated in Australian hospitals, including seven in intensive care.

Only 12 passengers who were too unwell to fly are still on the ship, Australian media report.

The case has become highly controversial, with many locals saying people from the ship who are being treated in hospital are taking up capacity that should be reserved for Australians falling ill with Covid-19.

Western Australia Premier Mark McGowan has called on the federal government to force the ship to leave Australian waters.

“If the ship needs to be cleaned, well, clean it and then get it on its way,” he said.

However, Attorney General Christian Porter told 6PR radio that while the ship was the subject of an order to leave the port authorities still had a “’humanitarian obligation” towards the remaining passengers.

There have been 4,862 cases of COVID-19 in Australia with at least 20 deaths, according to figures from Johns Hopkins University.