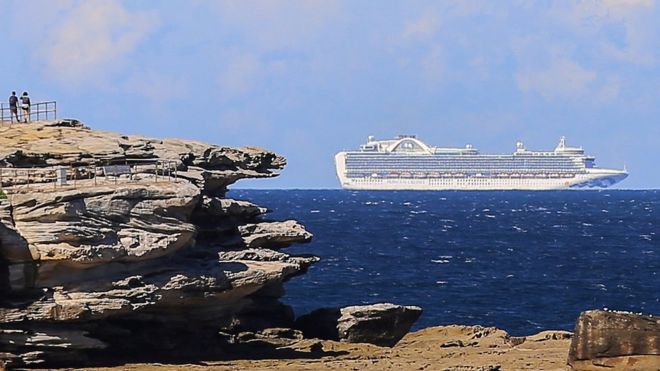 A criminal investigation has been launched in Australia into how cruise ship passengers were allowed to disembark in Sydney despite some exhibiting flu-like symptoms.

More than 600 people on board the Ruby Princess later tested positive for coronavirus and 10 have since died.

The ship remains off the coast with nearly 200 sick crew members on board.

Police in New South Wales said they would look into whether national biosecurity laws had been broken.

Australia has so far reported 5,548 coronavirus cases and 30 deaths.

Those sickened on cruise ships account for nearly a tenth of all cases in Australia.

The country has imposed strict social distancing measures and clubs, cafes, parks and gyms have been closed in a bid to contain the outbreak

At a news conference, New South Wales Police Commissioner Mick Fuller said there were “many unanswered questions” about the incident.

He said that, by law, vessels were only allowed to dock and disembark passengers if the captain could assure the local authorities that their ship was free from contagious disease.

Mr Fuller said there were “discrepancies” involving the information provided by the ship’s owners, Carnival Australia, and the requirements of the law.

“The only way I can get to the bottom of whether our national biosecurity laws and our state laws were broken is through a criminal investigation,” he told reporters.

Mr Fuller said that the day before passengers disembarked in Sydney a worker made an emergency call about two people who needed medical assistance. He said police were assured by the operating company that the coronavirus was not an issue on the ship.

“From that perspective, there are many unanswered questions,” he added. 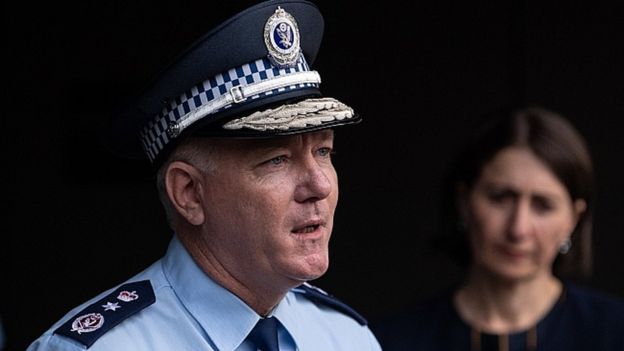 The New South Wales government has faced mounting criticism for allowing people off the ship but has insisted that the decision was based on expert advice.

Mr Fuller added that Carnival Australia had said it would fully co-operate with the inquiry. The company has not yet commented publicly on the criminal investigation.

The Ruby Princess with about 2,700 people on board arrived in Sydney last month after an 11-day cruise.

According to NSW Health, about a dozen passengers had reported feeling unwell and had swabs taken for Covid-19. One was taken by ambulance to hospital.

But other passengers on board weren’t told of this. Instead, they streamed off the boat at Circular Quay – some of them coughing and spluttering, according to witnesses. The busy area leads directly into the city centre, with transit links to the airport and outer suburbs. 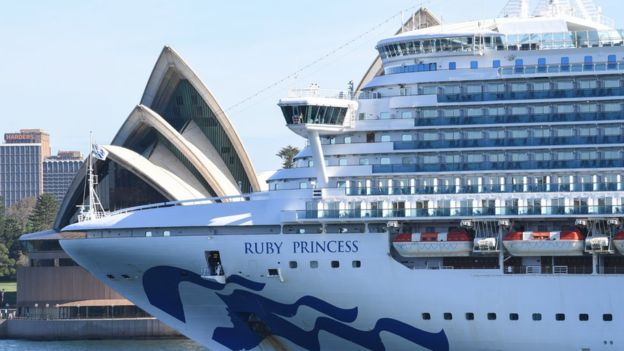 Elisa McCafferty, an Australian woman who flew home to London with her husband immediately after disembarking, told the BBC: “Nothing was said at any time about anyone being sick onboard. It was a distinct lack of information coming through from Princess [Princess Cruises which is owned by Carnival] the entire time.”

Ms McCafferty said she only learned of the danger when she checked her phone at Heathrow Airport.

“I was just absolutely petrified. We had just been on two full flights – what if we had infected someone?”