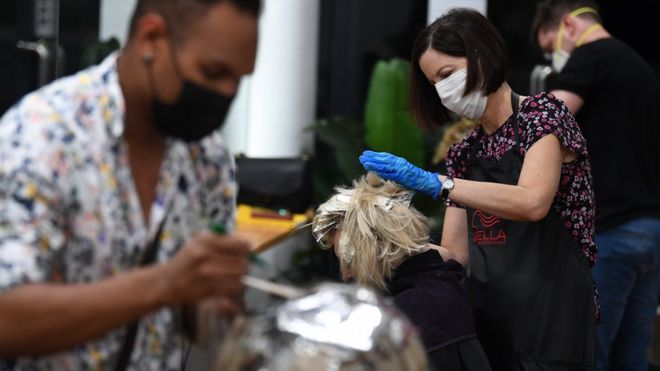 Australia has reversed a decision to limit hairdressing appointments to just 30 minutes following a backlash.

However, while appointments can now go on for longer, hairdressers and barbers must still observe the “four square metre per person” rule.

Salons have been allowed to remain open, despite other businesses being closed amid the coronavirus outbreak.

But some have called for all salons and barbers to be shut during the outbreak, which has killed 13 in Australia.

However, the prime minister said that hairdressers and barbers could remain open as long as businesses maintained social distancing, limited the number of customers inside their premises and restricted appointments to 30 minutes.

“We need the government now to shut us down,” he said.

Speaking in a video filmed in one of his company’s salons, Mr McFaddon added: “Does this make sense? I’m touching this client’s hair, and our stylists are doing this every day.”

He added that until the decision to close all hairdressers was taken, no provisions could be made to look after staff.

“When that happens, there will be a safety net for our staff and also the landlords might be sympathetic to the rents that we’re going to be paying,” he said.

“I plead for the state and federal governments to consider that this is dangerous.”

Separately on Wednesday, a hairdresser in South Africa was charged with attempted murder after defying a doctor’s order to self-quarantine.