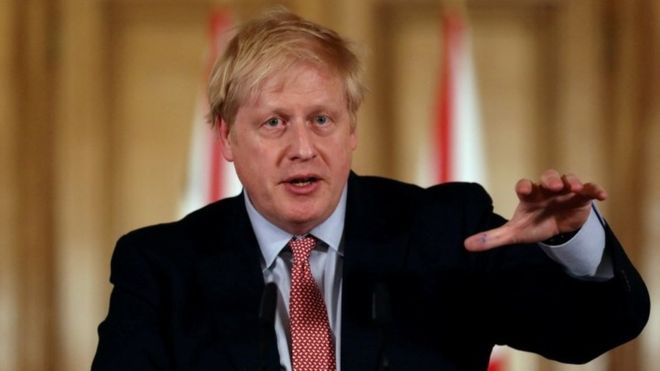 Boris Johnson has told colleagues his concerns that relaxing lockdown measures too soon could lead to a second outbreak of coronavirus.

The PM is understood to have met his deputy Dominic Raab at Chequers on Friday to discuss the crisis.

He is thought to have told Mr Raab and other officials via video that stopping a second peak was his priority.

It comes after criticism Mr Johnson did not chair or attend five early meetings about the virus.

Cabinet Office Minister Michael Gove confirmed on Sunday that the PM had not been involved in the so-called COBR meetings – Cabinet Office Briefing Rooms – as reported in the Sunday Times.

Shadow health secretary Jonathan Ashworth accused Mr Johnson of being “missing in action” at the start of the crisis.

But a government spokesman said it was “entirely normal and proper” for COBR to be chaired by the relevant secretary of state rather than the prime minister.

They added Boris Johnson “has been at the helm of the response to this, providing leadership during this hugely challenging period for the whole nation”.

Culture Secretary Oliver Dowden also defended his boss, saying the PM was “being briefed on an hourly and daily basis” and “took a very close personal interest” in the virus early on.

The PM is currently staying at Chequers – the country retreat of the prime minister – while he recovers from coronavirus, and is not officially back at work yet.

Mr Raab – who is deputising for the prime minister during his recuperation – held another virtual meeting with leaders of the opposition parties to update them on the government’s handling of the outbreak.

A spokesman for Labour leader Sir Keir Starmer said the meeting had been “constructive” and he “reiterated his support for the government’s decision to extend the lockdown”.

But he said Sir Keir repeated calls for more detail on the exit strategy for ending the measures and “raised his concerns” about the availability of PPE.

Economic impact
Meanwhile, government sources said the review of lockdown measures in three weeks would lead to modifications, rather than any widespread easing.

BBC assistant political editor Norman Smith said the fear in government about another outbreak is not solely of more deaths, but also the impact it would have on the economy if employees are sick and unable to work.

He also said the belief is the additional impact on businesses who were forced to remain shut in a second lockdown would be more profound.

Mr Dowden said the government would take appropriate measures to ease the lockdown “based on the evidence”.

But he referenced Mr Johnson’s earlier statement that it could take 12 weeks to “turn the tide” on the virus.

“But we will take the appropriate measures based on the facts and evidence, and that has not changed.”