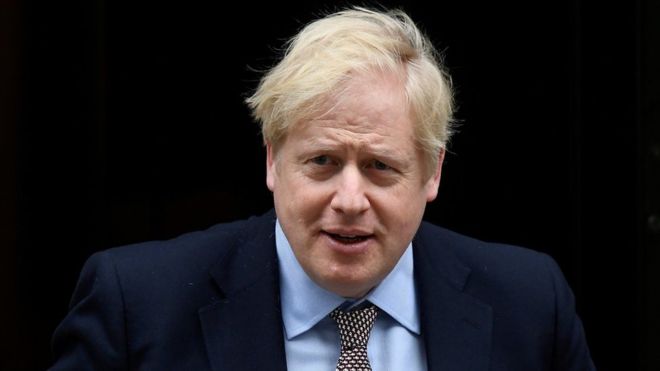 Prime Minister Boris Johnson has been moved to intensive care in hospital after his coronavirus symptoms “worsened”, Downing Street has said.

A spokesman said he was moved on the advice of his medical team and is receiving “excellent care”.

The prime minister, 55, was admitted to hospital in London with “persistent symptoms” on Sunday evening.

A No 10 statement read: “The prime minister has been under the care of doctors at St Thomas’ Hospital, in London, after being admitted with persistent symptoms of coronavirus.

“Over the course of [Monday] afternoon, the condition of the prime minister has worsened and, on the advice of his medical team, he has been moved to the intensive care unit at the hospital.”

It continued: “The PM is receiving excellent care, and thanks all NHS staff for their hard work and dedication.”

Mr Raab said there was an “incredibly strong team spirit” behind the prime minister.

He added he and his colleagues were making sure they implemented plans Mr Johnson had instructed them to deliver “as soon as possible”.

“That’s the way we’ll bring the whole country through the coronavirus challenge,” he said.

Chancellor Rishi Sunak said his thoughts were with the prime minister and his pregnant partner, Carrie Symonds, and that Mr Johnson would “come out of this even stronger”.

“All the country’s thoughts are with the prime minister and his family during this incredibly difficult time,” he added.

Mr Johnson was initially taken to hospital for routine tests after testing positive for coronavirus 10 days ago. His symptoms included a high temperature and a cough.

Earlier on Monday, he tweeted that he was in “good spirits”. 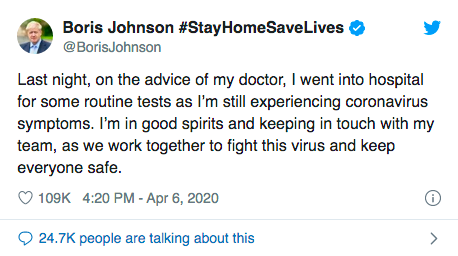 After very, very little information was shared today, the prime minister was taken into intensive care at around 19:00 BST.

We’ve been told he is still conscious, but his condition has worsened over the course of the afternoon.

And he has been moved to intensive care as a precaution in case he needs ventilation to get through this illness.

The statement from Downing Street makes clear he is receiving excellent care and he wants to thank all of the NHS staff.

But something important has changed, and he has felt it necessary to ask his foreign secretary to deputise for him where needs be.

That is a completely different message from what we have heard over the past 18 hours or so, where it was continually “the prime minister is in touch” and “he is in charge” – almost like everything is business as usual.

But clearly being in intensive care changes everything.

Last month, the prime minister’s spokesman said if Mr Johnson was unwell and unable to work, Mr Raab, as the first secretary of state, would stand in.

It comes as the number of coronavirus hospital deaths in the UK reached 5,373 – an increase of 439 in a day.

The Department of Health and Social Care said there were now 51,608 confirmed coronavirus cases.

Former Labour leader Jeremy Corbyn said his thoughts were with the prime minister and his family, and thanked NHS staff for “their hard work and dedication”.

And Mayor of London Sadiq Khan tweeted that St Thomas’ Hospital had “some of the finest medical staff in the world” and that the prime minister “couldn’t be in safer hands”.

Speaking during the government’s daily coronavirus briefing earlier on Monday, Mr Raab stressed that the prime minister had been continuing to run the government from hospital.

Asked whether that was appropriate, Mr Raab said Mr Johnson would “take the medical advice that he gets from his doctor”.

“We have a team… that is full throttle making sure that his directions and his instructions are being implemented,” he said.

The foreign secretary added that he had not spoken to the prime minister since Saturday.

On Saturday, Ms Symonds, who is pregnant, said she had spent a week in bed with the main symptoms. She said she had not been tested for the virus.