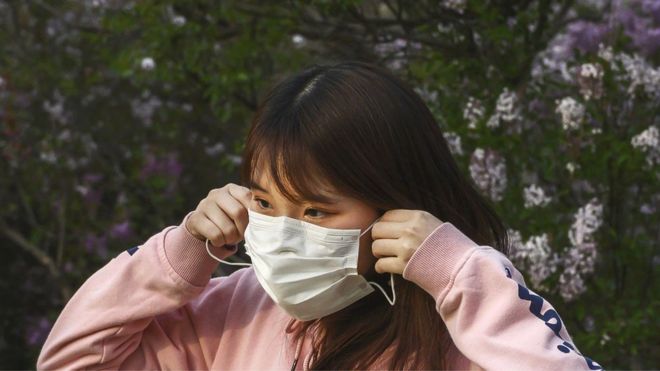 China reported no coronavirus deaths on Tuesday, the first time since it started publishing daily figures in January.

The National Health Commission said it had 32 confirmed cases, down from 39 on Monday.

It comes as the government is under scrutiny as to whether it is underreporting its figures.

The government says more than 3,331 people have died and 81,740 have been confirmed as infected.

All of the confirmed cases on Tuesday had arrived from overseas.

China is concerned a second wave of infections could be brought in by foreign arrivals.

It has already shut its border to foreigners including those with visas or residence permits.

On Wednesday, Wuhan is set to allow people to leave the city for the first time since the lockdown began in January.

Officials say anyone who has a “green” code on a widely used smartphone health app will be allowed to leave the city.

Some people in “epidemic-free” residential compounds have already been allowed to leave their homes for two hours.

But Wuhan officials revoked the “epidemic-free” status in 45 compounds because of the emergence of asymptomatic cases and for other unspecified reasons.

Asymptomatic refers to someone who is carrying the virus but experiencing no symptoms.

China began reporting asymptomatic cases at the beginning of April.

More than 1,033 asymptomatic patients are under medical observation.

Hitting back at claims China was too slow to raise the alarm, the country’s state media have published what they describe as a detailed timeline of its response and information sharing.

The first day with zero new reported coronavirus deaths since the National Health Commission started publishing daily figures is no doubt a cause for hope in China and even across the world. In a way it doesn’t matter if the figure is real.

There has been much debate about the veracity of this country’s coronavirus statistics but, even if the overall number of infections and deaths is under-reported, the trend seems instructive. Why? Because the trend matches reality in so many ways.

Interestingly, China’s Communist Party-controlled media is not reporting the first 24 hours without fatalities with any great fanfare. The subject isn’t even a key trending subject on Chinese social media platforms. It was the same when we had the first day with no new home-grown infections.

This either means Chinese media outlets know too well that there are flaws in the accounting here or, more likely, that the Party knows there are flaws in its accounting so it’s ordered a cautious presentation. Either way, in the end, it’s probably neither here nor there. Look at the trend. In the trend there is good news.

What’s happening elsewhere?
UK Prime Minister Boris Johnson has spent the night in intensive care. He has been suffering from coronavirus symptoms for 10 days
Late on Monday, the US recorded 1,150 new coronavirus deaths in 24 hours. It now has the world’s highest number of confirmed cases with more than 366,000
More than 1.3 million cases have now been confirmed worldwide with nearly 75,000 deaths
Japan is preparing for a state of emergency to go into effect. The measure, announced on Monday, could go into effect as early as Tuesday evening
France has recorded its highest daily death toll of 833

Fears of front-line Egyptian doctor in UK on visa