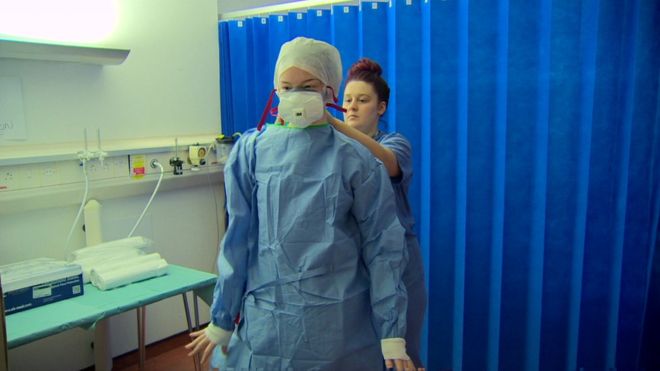 Medical staff have been advised to reuse personal protective equipment and wear plastic aprons with coveralls, rather than the full-length gowns, if stocks in England run low.

There have been warnings some hospitals could run out of the gowns used in intensive care units this weekend.

The government said it is working to provide the PPE stocks hospitals need.

Public Health England changed guidance on Friday, asking doctors and nurses to work without full-length gowns and to reuse other certain items, as “some compromise is needed to optimise the supply of PPE in times of extreme shortages”.

Chris Hopson, chairman of NHS Providers, which represents healthcare trusts across England said some trusts will run out over the weekend.

Mr Hopson said in a tweet: “We have now reached the point where the national stock of fully fluid repellent gowns and long-sleeved laboratory coats will be exhausted in the next twenty-four to forty-eight hours.”

He said that national leaders have left “no stone unturned” – but the gowns are made in China and those that were ordered weeks ago are currently only arriving in “fits and starts”.

‘Lives on the line’
The Royal College of Nursing said the guidance was developed without a full consultation and the British Medical Association (BMA) – which represents doctors – said any change must be driven by science, not availability.

Dr Rob Harwood, consultants committee chairman at the British Medical Association, said: “If it’s being proposed that staff reuse equipment, this must be demonstrably driven by science and the best evidence – rather than availability – and it absolutely cannot compromise the protection of healthcare workers.

“Too many healthcare workers have already died. More doctors and their colleagues cannot be expected to put their own lives on the line in a bid to save others, and this new advice means they could be doing just that. It’s not a decision they should have to make.”

A Department of Health spokesman said: “New clinical advice has been issued today to make sure that if there are shortages in one area, front-line staff know what PPE to wear instead to minimise risk.”

The UK announced 847 new coronavirus-related deaths in hospitals in its latest figures on Friday, taking the total to 14,576.

The World Health Organization questioned whether antibody tests will offer any guarantee of immunity against coronavirus
Testing will be rolled out to people working in public services such as police, fire and prison staff, the health secretary has said
Scientists at the University of Oxford said they should have at least a million doses of a coronavirus vaccine by September
Councils in England warned that the coronavirus crisis is pushing them to the brink of financial failure
Chancellor Rishi Sunak extended the government’s furlough scheme by another month until the end of June
Providing hotel rooms for those sleeping on England’s streets should lead to a long-term reduction in rough sleeping, says a charity supporting the homeless
A star-studded concert to support frontline workers featuring artists including Rolling Stones and Billie Eilish will be live-streamed and broadcast on TV
US President Donald Trump has defended his tweets after appearing to endorse protests against lockdown measures in several US states