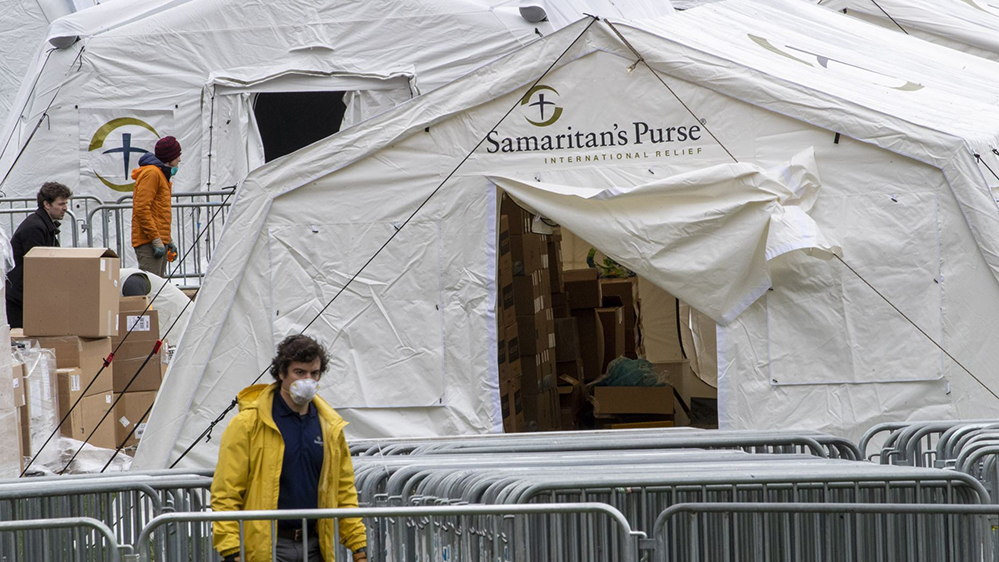 The number of coronavirus related deaths topped 4,000 in the U.S. on Tuesday night, just one day after reaching the 3,000 mark.

The U.S. has now surpassed China by over 700 COVID-19 fatalities — as the White House coronavirus task force said it projects 100,000 to 240,000 deaths from the virus and millions infected in the country.

Without any measures in place to mitigate the contagion’s spread, those projections jump to between 1.5 million and 2.2 million deaths from COVID-19.

“This is going to be a rough two week period,” President Trump said in a press conference on Tuesday. “As a nation we’re going to have a really rough two weeks. Our strength will be tested and our endurance will be tried.”

China — where the outbreak started — has reported 3,310 virus-related deaths, while over 4,070 have been killed in the U.S.

Deaths surged by roughly 700 on Tuesday as infections are nearing 190,000 in the U.S. Wyoming is the only state in the country without a fatality from the virus after Hawaii announced a senior citizen with multiple medical issues had died from the pandemic, according to Hawaii News Now.

In the U.S., 11 states have over 4,000 coronavirus infections — as Michigan, Illinois, Louisiana and Massachusetts have started to become emerging hotspots for the virus. Michigan now has 7,615 cases after 1,117 infections and 75 deaths were recorded in a single day. Over 259 people in the state have died from the virus.

Illinois — which has seen nearly 6,000 infections — sent out an emergency alert to residents in the state on Tuesday requesting the need for additional licensed healthcare workers.

“In the COVID-19 event, Illinois is looking for medically trained individuals to join the fight,” according to the website where health professionals are directed to sign up. “Individuals that register here may be potentially contacted to work in a hospital surge or alternative housing setting.”

Following Mardi Gras celebrations, cases in Louisiana increased by 1,212 on Tuesday, bringing the state’s total to 5,237. It was a 30 percent increase from Monday.

“Because of the sheer volume of cases, we will be sharing the updated number of clusters every day at noon,” the Louisiana Department of Health said. “The Department continues to work with facilities to minimize the spread of the illness and protect residents and staff.”

In Massachusetts, Gov. Charlie Baker announced that non-essential businesses must stay closed, with residents advised to stay home until at least May 4. On Tuesday, 33 new fatalities were reported, making it the deadliest day of the outbreak so far in the state. The number of cases increased by 868 to 6,620.

Worldwide, Italy and Spain remain hotspots for the virus in Europe. Italy has over 105,000 infections and 12,400 deaths — although the country saw the lowest daily case increase in two weeks on Tuesday.

Meanwhile, Spain suffered its deadliest day during the coronavirus pandemic on Tuesday, as 849 were confirmed to have been killed by the virus. As of Wednesday morning, the country has over 95,000 infections and 8,464 coronavirus related deaths.

COVID-19 fatalities in France surpassed China on Tuesday. The European country now has over 52,000 infections and 3,532 deaths from the virus, according to data from Johns Hopkins.

‘What are we doing this for?’: Doctors are fed up with conspiracies ravaging ERs