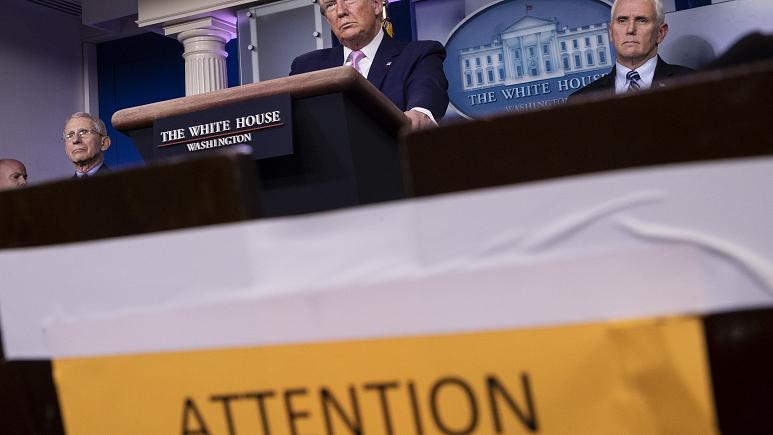 The number of coronavirus deaths in the United States has risen above 5,000, while the number of confirmed cases has topped 216,000 — according to data from Johns Hopkins University.

The figures came on the day Vice President Mike Pence said White House models showed the country was on a trajectory similar to Italy, the world’s worst-affected nation for fatalities.

With 216,721 cases of COVID-19 as of Thursday morning (CET), the US is by far the hardest hit nation in the world in terms of infections.

A further 884 people died in the latest 24 hour period. In Connecticut Governor Ned Lamont confirmed “with heartbreaking sadness” the death of a six-week-old baby who had tested positive for COVID-19.

President Donald Trump acknowledged that the federal stockpile is nearly depleted of personal protective equipment used by doctors and nurses and warned of trying times to come. Earlier he accepted a planeload of medical aid from Russia.

“Difficult days are ahead for our nation,” the president said. “We’re going to have a couple of weeks, starting pretty much now, but especially a few days from now that are going to be horrific.”

New York rushed to bring in an army of medical volunteers as the statewide death toll from the coronavirus doubled in 72 hours to more than 1,900. The state has reported more than 83,000 cases.

Other hot spots have flared in places like New Orleans and Southern California, but the nation’s biggest city is hardest hit of all. Bodies have been loaded onto trucks outside overwhelmed hospitals.

“How does it end? And people want answers,” New York Governor Andrew Cuomo said. “I want answers. The answer is nobody knows for sure.”

President Trump is resisting calls for a national lockdown, despite his administration’s own projections that tens of thousands of Americans are likely to die amid the pandemic.

However, several states are pursuing their own policies and implementing shutdown orders of their own. Florida, Georgia and Mississippi are the latest to impose lockdowns.

Meanwhile uncertainty surrounds the fate of passengers on cruise ships stranded off the coast of Florida. The Zaandam and Rotterdam liners have been heading towards Port Everglades and on Thursday morning were waiting for the green light from authorities to dock.

Trump has indicated that British and Canadian nationals on board will be evacuated. Four people have died and dozens are sick on board the two ships.

The US reported more than 19,000 coronavirus cases on Monday