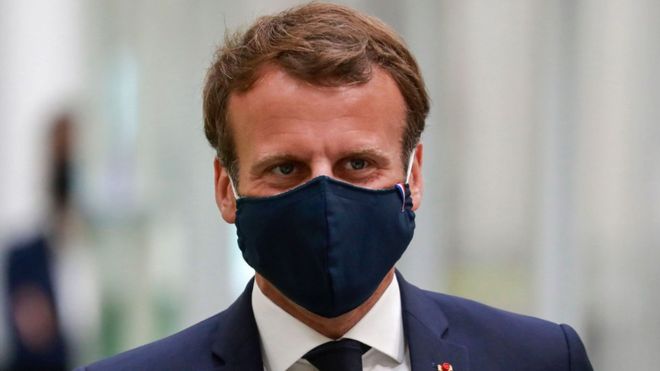 The French government has announced an €8bn (£7.1bn) rescue plan for its car industry, which has been severely impacted by the coronavirus pandemic.

President Emmanuel Macron’s proposal includes €1bn to provide grants of up to €7,000 to encourage citizens to purchase electric vehicles.

It also puts money toward investments to make France a centre for electric vehicle output.

The plan comes as the industry braces for thousands of job cuts.

In return for the relief, the two main French car producers Renault and PSA have promised to focus production in France.

“We need a motivational goal – make France Europe’s top producer of clean vehicles by bringing output to more than one million electric and hybrid cars per year over the next five years,” President Macron told reporters at a press conference at the Valeo car factory in Etaples, northern France on Tuesday.

He added that no car model currently produced in France should be manufactured in other countries.

To help sell the 400,000 vehicles languishing in car dealerships due to the coronavirus lockdown measures, President Macron said the government would also give people upgrading to a less polluting car a €3,000 bonus, as part of a scheme open to 75% of French households.

“Our fellow citizens need to buy more vehicles, and in particular clean ones. Not in two, five or 10 years – now,” he stressed.

Like in other countries, France’s car industry has ground to a halt – with an 80% fall in sales and a backlog of nearly half a million new vehicles waiting for owners.

President Macron – in his new post-virus spend-and-invest mode – wants to act now not just to rescue the industry from the immediate crisis, but also to prepare it for a future that will be both electric and he hopes much less dependent on foreign and in particular Chinese suppliers.

To boost demand now, the grants for households or companies that buy new electric cars are increased, as is the so-called conversion bonus for trading in a polluting car for a cleaner one.

The number of battery charge-points will be tripled to 100,000 by the end of next year.

A billion euros in investment will be directed into research and modernising production, and there’ll be a €5bn loan for Renault – part of the return for which is a promise by Renault to join a Franco-German consortium to develop car batteries.

The aim, Mr Macron said, is to have one million electric cars being made in France every year by 2025.

According to IHS Markit, France was Europe’s top producer of electric and hybrid cars in 2019, with almost 240,000 vehicles, but Germany is set to overtake it by the end of this year.

Factory closures
The €8bn plan does not include an expected €5bn loan for embattled French carmaker Renault, which in February reported its first annual loss in a decade.

The company has been planning to unveil a big restructuring plan on 29 May that was reportedly likely to see it close three factories in Choisy-le-Roi, Dieppe and Caudan. A fourth factory, Flins, will be converted into an electric battery factory. 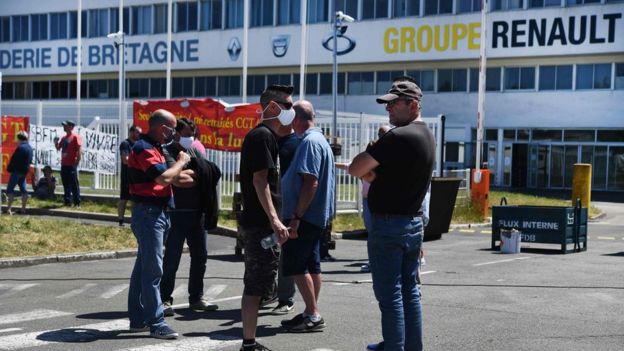 Mr Macron said on Tuesday that Renault had agreed to join a Franco-German project to produce electric batteries for the rechargeable auto industry, a step the government had set as a condition for the loan.

But Mr Macron said the government would not sign off on the deal until Renault’s management and unions had concluded talks over the carmaker’s French workforce and plants in France.

Mr Macron only guaranteed the future for employees of Renault’s factories in Mauberge and Douai, however. And French daily national newspaper Le Figaro reported exclusively on Tuesday that Renault is planning to cut 5,000 jobs by 2024.

The 370 employees that work at the Fonderie de Bretagne, near Lorient in north-western France, are concerned that the carmaker intends to close the factory.

They have been protesting since Monday, blockading the factory, and told French national radio network Europe 1 that they intend to march on the streets of Lorient on Wednesday.