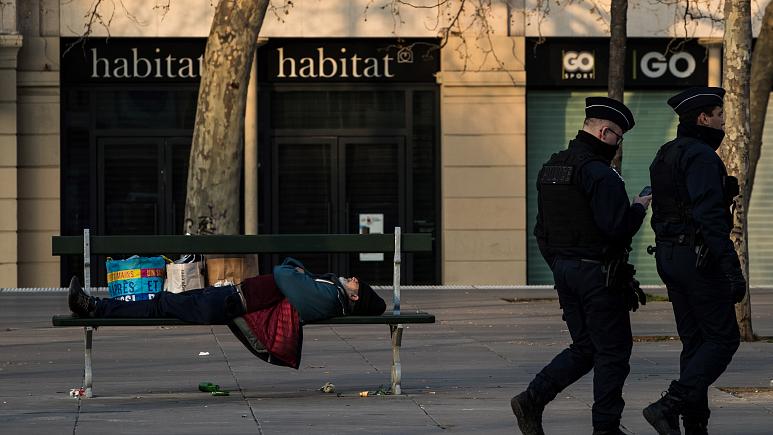 President Emmanuel Macron declared a nationwide policy of self-isolation on Monday, with all French people asked to stay home as much as possible and go out only for work, exercise or necessary shopping.

The measure is to last at least 15 days and people not following these rules risk fines from €38 and up to €135.

Homeless people were fined in Paris, Lyon and Bayonne, according to the charities.

But those who have no place to stay find themselves in a catch-22 situation: they have nowhere to go, but they cannot stay in public places.

“We ask for clear advice to be sent to local authorities to immediately stop these sanctions,” Florent Gueguen, the director of France’s Federation of Solidarity (FAS), which includes 800 charities fighting against poverty and homelessness, told the AFP.

Maud Bigot, the director of the Lyon branch of the Samu Social, said her team had received a dozen calls in two days from homeless people who had been threatened with a fine for being in the streets. She said she had heard of similar cases in Lille, Bordeaux and Toulouse.

“I had someone on the phone who was absolutely panicked,” Bigot said. “There isn’t enough housing centres and the shopping centres, all the places they would usually go to hide have closed. People who are terrified, because the police has told them they are giving them a fine, or that they will be fined if they don’t find shelter.”

In the next few days, France is to open “self-isolation centres for the homeless with COVID-19 who cannot be isolated in housing centres and whose health doesn’t necessitate to go to hospital.

But this will not help the homeless without symptoms, who still won’t have anywhere to go, Bigot said

“In the deserted streets, they’re all we can see,” she said. “Even if the police only threatens to fine them and doesn’t do it, it is enough to terrorise them.”

With the closure of all public places, the homeless have also been struggling to access hygiene such as showers.

“There is only one public shower in Lyon,” Bigot said. “We have asked the authorities to let the homeless use public swimming pools to shower.

“This is a drama unfolding in real time. For the homeless, who already are extremely fragile, COVID-19 is like a double penalty.”

The Lyon préfecture has said that these fines, if confirmed after an internal investigation, would be “immediately void” due to being “contrary to instructions”, the Lyon local newspaper Le Progrès reported.

France’s “total quarantine” has been in place since Tuesday at noon. All French citizens must print and sign a daily “official authorisation” to go out for work, shopping or short exercise, or be fined €135.

In South Korea, 219 cases have been linked to the nightclub cluster

The US reported more than 24,000 cases today