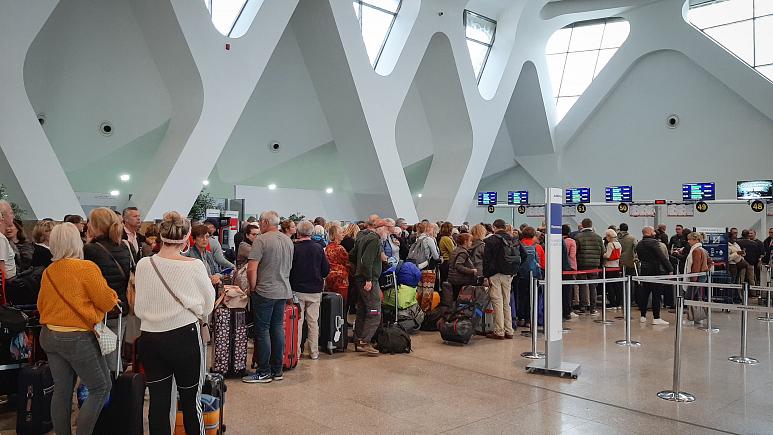 They had hoped for sun, beach and relaxation. Instead, they got stuck in a foreign country as the world grapples with a global pandemic.

Thousands of European tourists are stranded abroad as the coronavirus pandemic has caused the cancellation of their flights back to Europe.

One of them is Leonardo Anzile, 23, a German citizen who went on holiday in Morocco to go surfing.

He booked a trip to a small village by the seaside, a four-hour drive southwest of Marrakech. But even in the picturesque Imsouane, he is now caught up by the coronavirus: instead of flying home on Thursday, he is stranded in Morocco and doesn’t know when he will return to Europe.

Anzile’s flight home has been cancelled alongside hundreds of other ferries and flights to Europe until the end of March because of the coronavirus.

He hasn’t been able to rebook his trip back yet: he managed to book a return flight with Lufthansa scheduled for 21 March, but this one was then cancelled, too, Anzile told Euronews.

Instead, he has been looking for alternatives on his own initiative, contacting the German Ministry of Foreign Affairs and the embassy every day. He is still waiting to hear back.

The behaviour of the German authorities is “planless” and the flow of information “sparse”, he said, adding that he is worrying about what to do when his hotel booking is over.

Anzile is not alone. Up to 5,000 German tourists are estimated to be stuck in Morocco and many more elsewhere.

Long queues have formed at the airport and anger and frustration are spreading. Many complain that they have been abandoned by the German Embassy and the Ministry of foreign affairs.

“I just wanted to get rid of stress”
Although Germany has announced it will send planes to Morocco, some of these few flights have also been cancelled – and there weren’t enough to accommodate all the stranded tourists.

Cemal Güven, 30, from Saarbrücken, is one of the lucky ones. As he spoke to Euronews on the phone, he was queuing with a friend and other Germans, about to board a Germany-bound A-320 plane.

“There are considerably more people waiting here than there seems to be room for on the plane”, Güven said as he waited. “If necessary I will lie down on the ground. I am not going back!”

Güven’s holiday was supposed to last another five days, but when his tour operator informed him about the cancelled flights, the holiday fun came to an end.

“Waiting at the hotel was horrible. For two and a half days we were worried and didn’t know when we would return to Germany. The situation at the airport was bad, people were sent back from the counter. Elderly people panicked,” Güven said.

Then his tour operator offered him an earlier return flight to Düsseldorf. Güven didn’t think twice.

The Saarbrücken local eventually made it back to Germany, but for hundreds of others, the holiday nightmare isn’t over.