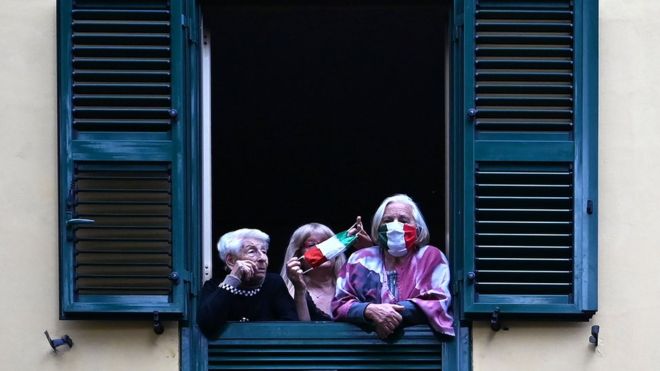 The number of people officially identified as infected with coronavirus in Italy has fallen for the first time since the country’s outbreak began, authorities have said.

As of Monday, there were 108,237 people either being treated in hospital or recovering at home, 20 fewer than the previous day.

Authorities say the small but symbolic drop is a “positive development”.

Italy’s lockdown continues until 3 May but some businesses have reopened.

They include bookshops, stationers and shops selling children’s clothes, as officials see how social distancing measures can be safely applied.

Italy has the third-highest number of Covid-19 cases in the world after Spain and the US. On Sunday, the increase of active positive cases in the country was 486.

“For the first time, we have seen a new positive development: the number of currently positive has declined,” civil protection agency chief Angelo Borrelli told reporters.

More than 24,000 people have so far died of the coronavirus in Italy, according to US-based Johns Hopkins University, which is tracking the disease globally.

However, as people who die at home or in care facilities are not included in the country’s figures, many believe the actual death and infection rates may be higher than the official tallies.

The Italian authorities have called the figures “extremely encouraging”. The number of people currently infected with coronavirus has fallen for the first time; it is an important milestone, despite the fact that there were fewer tests than the previous day.

Total cases, which includes those who have died and recovered, rose by just over 1.2%, the smallest proportional increase since the outbreak began. There were, however, 454 deaths – slightly up on Sunday’s figure.

While the infection numbers are cause for optimism, the daily death toll is proving stubbornly high.

Intensive care figures also show a downward trend, with occupancy now at its lowest level in a month. Italy is by no means out of the woods. But it is on the right path – and it now feels like its sacrifices are paying off.

What’s happening elsewhere in Europe?
France has become the latest country to record more than 20,000 deaths related to coronavirus, a toll the country’s director of health Jérôme Salomon has called “symbolic and painful”.

“Tonight, our country is crossing a painful symbolic milestone,” he said.

Unlike the UK, France is including nursing home deaths in its daily toll. As of Monday, there have been 20,265 virus-related deaths in France – 12,513 of them in hospitals and 7,752 in nursing homes, Mr Salomon added.

Germany has reopened small shops, car dealerships and bicycle stores, in a tentative easing of the coronavirus lockdown imposed nearly a month ago

In Portugal, 138 asylum seekers who tested positive for coronavirus are in quarantine, having been moved out of a hostel in Lisbon

Riot police in southern Russia were deployed on Monday to disperse hundreds of people protesting against coronavirus restrictions. Demonstrators chanted outside government headquarters in Vladikavkaz, the capital of North Ossetia

Coronavirus has spread to a third migrant facility in Greece – a pregnant 28-year-old Somali woman is now in isolation at a hotel in Kranidi housing 470 migrants from sub-Saharan Africa. The other people staying there are being tested