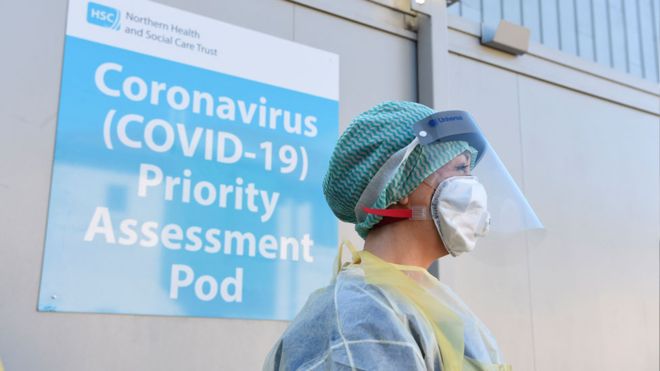 Health Secretary Matt Hancock says the government has “a huge amount of work to do” to meet its target of 100,000 coronavirus tests a day in the UK. But how does testing compare across the four UK nations?

Official data suggests testing for coronavirus per head of population in England has been considerably slower so far than that in Scotland, Wales and Northern Ireland.

As of 3 April, 256 people have been tested per 100,000 of the UK population, according to the Department of Health and Social Care. These are mainly swab tests to establish whether an individual is infected by coronavirus.

Testing and laboratories
The slower pace of testing in England has raised further concern because much of the procurement and allocation of tests has now been centralised for all four nations.

Experts say England has far more laboratories than the other UK nations, and it is important to create a uniform testing platform so all labs are testing in exactly the same way.

But Dr Bharat Pankhania, senior clinical lecturer at the University of Exeter medical school, says accreditation of labs has been too slow.

“This is nothing to do with capacity,” he says, “capacity can be expanded very quickly, and there are plenty of labs.”

“This is a simple test and we just need to get on with it. We don’t need this stranglehold by Public Health England [PHE].”

When asked to comment on the slower pace of testing in England so far, PHE pointed out that it is not directly responsible for laboratory accreditation. That’s the job of the United Kingdom Accreditation Service, although it is up to PHE and the Department of Health to ask for certain standards to be maintained.

“PHE has moved heaven and earth to develop an accurate test, ensuring that every hospital patient that needs one has been tested,” said PHE’s chief executive Duncan Selbie in a statement.

“We have supported NHS laboratories to get their COVID-19 testing up and running, to make sure the tests they are using provide accurate results.”

That of course does not explain the discrepancy in testing figures between different nations within the UK so far.

More detailed information about testing is also emerging, and the good news is that the capacity for testing in England has increased.

Over the last three days, PHE has started to release daily figures for the number of tests being done in England. We already had such information from Scotland and Northern Ireland.

Between 31 March and 2 April just over 7,500 people were tested every day. The number of tests done was higher than that (11,764 on 2 April), because some people require multiple tests for clinical reasons.

The government is determined to see that trend continue and it wants the number of people being tested to rise rapidly too.

All four nations are obviously trying to increase testing as much as possible as part of the UK-wide effort.

The Scottish First Minister Nicola Sturgeon said NHS Scotland’s testing capacity in hospitals would increase to at least 3,500 a day “by the end of this month, at the latest”.

She said that figure should be compared to the “pillar one” target in England of 25,000 tests a day – done in NHS and public health laboratories – by the end of April.