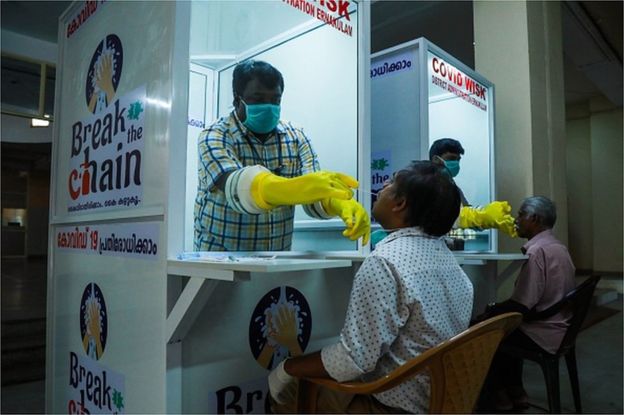 On 12 March, a 33-year-old salesman disembarked from a flight from Dubai at an airport in southern India, feeling very sick.

He was suffering from the chills, dry cough and breathlessness.

Airport officials quickly moved him to hospital in the city of Trivandrum in Kerala state, where they tested him for coronavirus.

Then they put him in an ambulance and sent him home to his village in Kasargod district, some 564 km (350 miles) away.

Chengala is a cluster of four wooded settlements where 66,000 people live. Most are engaged in farming paddy and vegetables.

Many others, like the young salesman, are among the more than two million people from Kerala who work outside the country, including in the Gulf states.

When the man reached Chengala, local village council members immediately reached out and the local public health centre took down his details.

They asked him to isolate himself from his wife and three children. So the man began living alone in a shed outside his house.

Six days later, his test came back as positive. By that time, he was already in isolation in his home. Later, he was taken to hospital, where he recovered. After returning home, the salesman is still living in isolation “just for safety”.

“We were ready from the very beginning. We realised a storm was coming. So we began erecting our defences,” Shahina Saleem, the president of the 23-member local village council, told me. These elected village councils are the lowest tier of governance in India.

Over the last month, Chengala has reported 22 cases of Covid-19 infection and quarantined more than 400 people. Twenty patients have recovered in hospital and returned home. More than 370 samples have been tested at hospitals some 8km away. Results usually arrive in 48 hours. 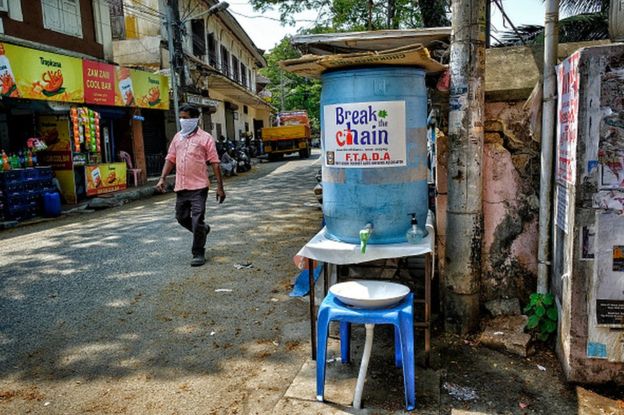 The local village council galvanised local health and community workers and opened a community kitchen to feed the people in isolation.

They have been providing free lunches for more than 1,200 people in the area – local residents and stranded migrant workers. Local health officers are making sure that villagers on medication get their pills on time.

Using a local helpline and two WhatsApp groups, the council encouraged local villagers to accommodate people who were in isolation and didn’t have enough space for social distancing at home. Two-dozen families vacated floors and even homes for this. Everyone in isolation now has to observe a 28-day quarantine.

Kerala, many believe, has turned out to be a striking outlier in the battle against the virus in India. The world’s second-most populous country has reported more than 9,750 cases and 377 deaths from the contagion so far.

In the beginning, the odds seemed to be stacked against the picturesque southern state, which is a major tourist location. In January, it reported the first Covid-19 case in India. The number of cases rose steadily, and it became a hotspot. Two months later, half a dozen states are reporting more infections than Kerala.

Kerala has porous borders, a large number of migrant workers, and a huge expatriate population who keep travelling back and forth and whose remittances oil the state’s economy.

More than two months after the outbreak of the pandemic, the state has reported three deaths and more than 370 confirmed cases of the infection. More than 100,000 people remain in isolation, at home or in designated facilities.

Many believe Kerala has flattened the curve at a time when the infection is on the rise all over India.

To be sure, the state has been alert and vigilant. It imposed a lockdown a day before the nationwide one, on 25 March. It did rigorous contact tracing, using detailed “route maps” of people coming in from abroad. It set up Covid-19 care centres in all districts to accommodate outsiders who were stuck and had been advised to isolate.

Health workers supported people with special needs and the elderly living alone. Counsellors made more than 340,000 telephone calls to personnel working in affected areas to counsel them on how to handle stress.

It’s not that Kerala tested aggressively. Testing was bound strictly by and limited to federal protocols. More than a dozen labs are testing 800 samples a day. 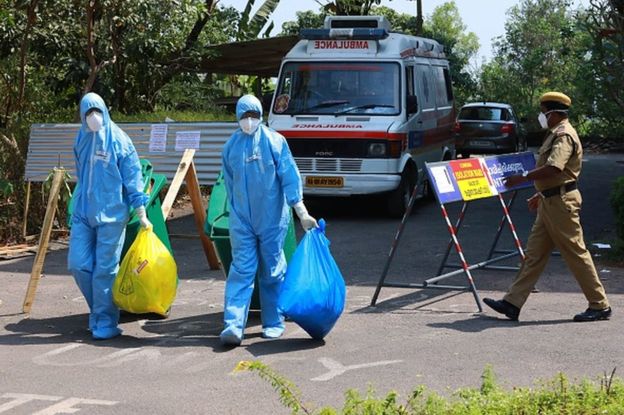 But, experts say, what really mattered in the end was Kerala’s robust public health system, and a culture of thriving grassroots democracy with power devolving effectively to the village councils. This mainly helped in community outreach, rigorous contact tracing and mass quarantine. The Communist government released abundant information about the developments every day, analysts say.

“A strong game-changer was the decentralised health care system. And village councils took upon themselves to enforce and monitor mass quarantine with the consent of the people. The shutdown also helped,” B Ekbal, a neurosurgeon and head of an expert panel advising the government on prevention of the virus, told me.

Economists like Jacob John believe that the devolution of power in Kerala – local government, community-driven village councils, vigilant municipalities – have helped the state tackle two consecutive floods and an outbreak of the vicious Nipah virus in the last three years.

The three-tier public health system, involving functioning government hospitals, is the result of a more than half-century long legacy of spending on healthcare. “Kerala,” says Dr John, “has spent more on health and education than most Indian states.”

Breathless media reports of Kerala “flattening the curve” could be premature, officials warn. 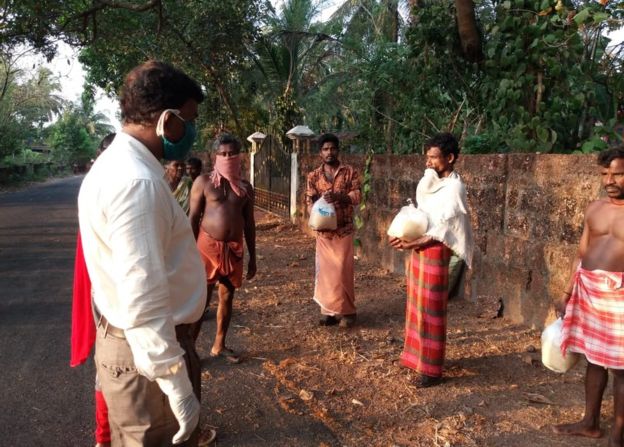 Like in the rest of India, much of the testing has been limited and delayed.

Mass screening with antibody tests has been delayed because about 100,000 kits which the state ordered haven’t arrived yet.

Fresh cases haven’t dried up completely. Kerala also “got lucky”, as one doctor told me – the average age of infected people here is 37 years old, and the majority of them are Gulf returnees.

“It’s not counter-intuitive. Some 70% of our Covid-19 patients have come from outside the country,” says Dr Ekbal. This in a state where more than 12% of the population are over 60 years old.

Also, worryingly, Kerala has one of the highest rates of communicable diseases – one that spreads from one person to another – in India. A large number of people also suffer from diabetes, heart diseases, respiratory and liver diseases.

The summer monsoon rains, which begin in June, usually trigger a spike in diseases like influenza, dengue and scrub typhus. Fever is a common symptom in many of these diseases. “This can complicate diagnosis. To make sure we don’t end up facing a fresh wave of infections during the rains, we have to very vigilant during the monsoon,” says a doctor.

Such heightened vigilance – controlling inflows of people across the border and isolating suspects – will come at an economic cost. The government has worked out a painstakingly detailed plan for the phased opening up of the state when infections stop.

So far Kerala has stuck to the script and done it well it, say analysts. Cases have slowed down, recoveries are high and the mortality rate is low. It helped that it had a smaller population (33 million) than many other states and also a highly literate one.

“We have won the quarter-final,” says Sreejith N Kumar, a doctor. “The semi-final would be a staggered easing up without a second wave of infection. And the final would be a return to normal life.”

“Only then we can say we won the game.”