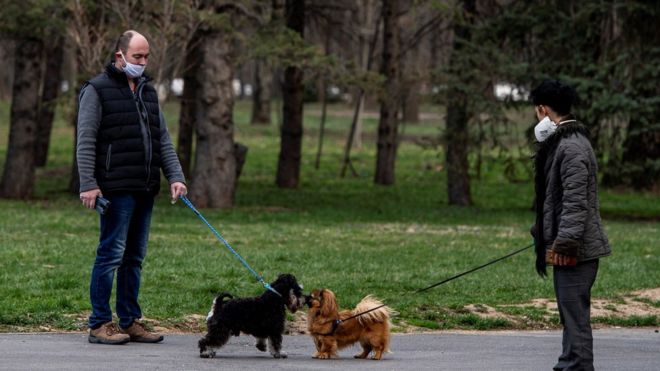 Over the weekend, photos of busy parks, markets and beaches in the US, UK and Canada caused uproar, as officials described people who ignored social distancing guidelines as selfish, arrogant or self-destructive.

On social media, some have been even more critical – the hashtag #COVIDIOTS has been trending, and people have criticised individuals seen at public gatherings, or posted that they “deserve to get the virus”.

In the UK, one man posted an expletive-laden rant as he live streamed people walking on the seafront by his house – in a video that went viral.

Social psychologists say that shaming plays a significant role in enforcing social norms – especially at a time when norms are rapidly changing as a result of coronavirus.

But social distancing outdoors can also be difficult – especially when there is contradictory advice about where to go, and you can’t predict how others will behave.

Can I still go for a walk?
The official advice can be confusing. On one hand, we’ve been told to stay home as much as possible. On the other hand, we’ve also been told that it’s important to keep exercising – and that a walk or run in the park is OK.

In New York, the city parks commissioner Mitchell Silver encouraged residents to use the city’s large number of parks, pointing out that spending time outdoors can reduce stress and boost the immune system.

Similarly, UK PM Boris Johnson has stressed that parks and open spaces are “crucial for our country and for our society”, and urged people to use them responsibly.

But when the parks become too popular – or people start gathering there in groups – it gets problematic.

Over the weekend, police in Seattle had to use loudspeakers at a park to remind people to keep 2m (6.5ft) away from each other, while in the UK, some parks, beaches and open spaces were packed over the weekend, leading to the government announcing greater restrictions on Monday.

The Stranger, a news site in Seattle, published a blog post with woodland trails for solo hikers – but decided to take down the post a day later, after learning that people were hiking and gathering at some of the trails in large groups.

And in Canada, beaches in Vancouver and Toronto were busy – even as some of the streets were quiet – prompting Prime Minister Justin Trudeau to warn people were “putting everyone else at risk”. 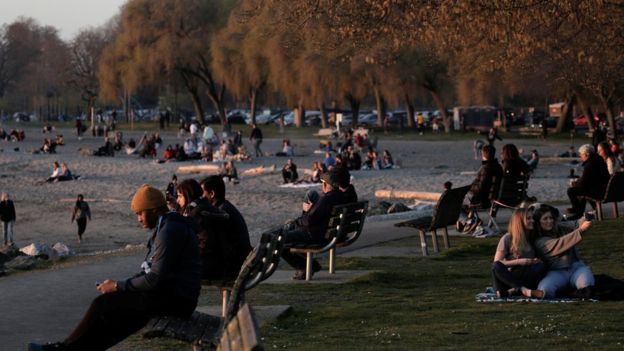 Brian Labus, a professor in public health at the University of Nevada, Las Vegas, stresses that you have to treat “going outside as a risk every time you do it”.

But, he adds, there are ways to reduce the risk to close to zero if you plan your trip carefully.

“If you’re outside walking by yourself, you’re not exposed; if you’re out walking the dog by yourself, there’s no risk… it’s when you have contact with other people that you need to be concerned.”

Running or cycling as a group – and running past others – is a no-go, due to the need to maintain a 2m distance at all times.

“If you’re running past somebody and they sneeze, that’s going to land on you. It doesn’t matter how fast you’re running – you can’t outrun a sneeze,” says Prof Labus.

Instead, he recommends runners and cyclists “look ahead”, and pace themselves where necessary, so they can work out how to keep a distance between themselves and others on the street.

It’s also important to think carefully about where you go – and prioritise avoiding crowds.

“As soon as there are large numbers in a park the risks go up,” he says, as it becomes harder to maintain a 2m distance with everyone.

“Just having a bunch of people there makes it tougher to keep that distance,” especially as entry points, like park gates, could get busy.

Instead, he recommends individuals “don’t go where people tend to congregate”, but walk through quieter places, like their own neighbourhoods.