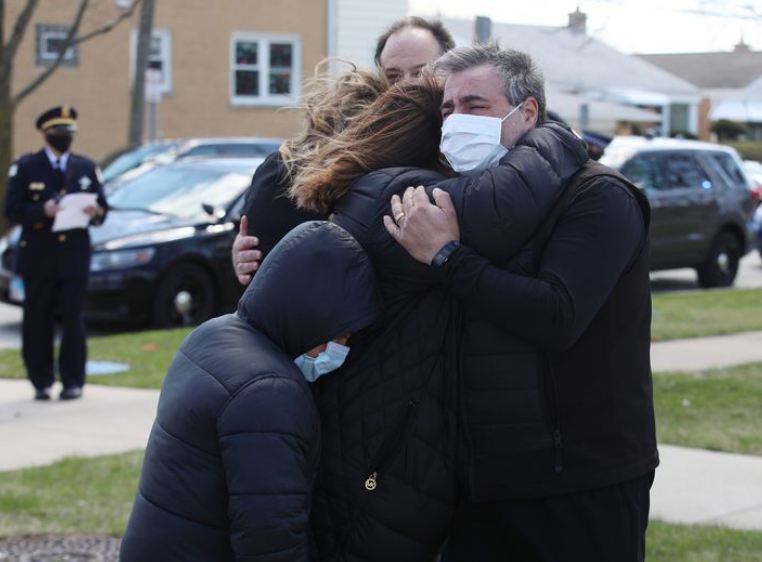 That brings the statewide totals in Illinois to 19,180 known cases and 677 deaths, according to state figures.

Gov. J.B Pritzker also announced the creation of a telehealth service and mental health support line to offer remote health services to residents across the state.

On Friday, responding to the outsize number of infections and deaths from the new coronavirus in African American communities, Pritzker laid out plans to ramp up testing on Chicago’s South and West sides, in the south suburbs and near St. Louis.

COVID-19 cases in Illinois by ZIP code: Search for your neighborhood »
Around the globe, there were signs of hope on Easter weekend as European leaders and other world governments plotted how to “re-open” their countries to commerce and everyday life.

As the pandemic continues, the Tribune is keeping a running list of Chicago-area closings and cancellations, asking experts to answer your questions about COVID-19, tracking cases across the state and memorializing those who have died in the Chicago area.

Here are the latest updates Saturday on the new coronavirus in the Chicago area and Illinois:

6:40 p.m.: Illinois endures second-deadliest coronavirus day, but Gov. J.B. Pritzker encouraged by trend of COVID-19 cases
Illinois reported its second-highest daily total of coronavirus deaths Saturday, but Gov. J.B. Pritzker expressed optimism that the number of COVID-19 cases had started to flatten out as he urged the state’s residents to stay home over the holiday weekend.

Health officials announced 81 new deaths in the state on Saturday, just one shy from the single-day high of 82 set last Wednesday. The number of additional known cases was 1,293 — 234 short of the previous high mark, also set last Wednesday.

Experts in the pandemic repeatedly have noted that a decrease in deaths will lag behind drops in new cases and hospitalizations. Overall, Pritzker said the state has started to trend in the right direction, but he cautioned against complacency as he called on Illinoisans to enjoy Passover and Easter Sunday celebrations at home.

“What we’re seeing is a flattening of the curve, and what that means is a lower rise in hospitalizations than what was initially anticipated. That’s a really good sign,” Pritzker said. “We’ve had higher numbers than we had today and we’ve had lower numbers, but if you look at a kind of moving average of days, you can see that the rate of ascent has significantly diminished. It’s not flat, but it’s not going up the way it was before.”

Illinois now has 19,180 known cases of the virus and 677 deaths. The number of people who have perished from the disease in the state ranks fifth-highest nationwide while the number of known cases ranks ninth-highest as of Saturday. Read more here. —Bill Ruthhart

5:20 p.m.: Priests at North Side Greek Orthodox church deal with 4 funerals, virtual ministering as 18 people linked to parish struck by COVID-19
When a parishioner of St. George Greek Orthodox Church in Lakeview received permission to be at the side of his parent who was seriously ill after contracting COVID-19, the Rev. Chrysanthos Kerkeres was able to say a prayer over the phone.

The son donned full protective gear, called up the priest on FaceTime and showed his parent the phone. Kerkeres gave a general blessing over the parishioner, who remains hospitalized.

The parishioner was one of 18 people with connections to the North Side church who have fallen ill with the virus, four of whom have died, leaving the priests to find ways to minister to the community virtually, Kerkeres said.

“It’s incredibly difficult,” he said. “We’re so used to most of our time being spent ministering to people face to face.”

The church was closed to the public on March 13, and the illnesses began cropping up in the past two weeks, so Kerkeres doesn’t believe the cases are associated with events at the church. He said most of the 18 people who became sick are from three different households who likely were exposed by other family members. Read more here. —Madeline Buckley

3:40 p.m.: 14-year CTA veteran dies of COVID-19
On Saturday, the CTA confirmed the first death of one of their staffers, the CTA said in a statement.

Antonio Martinez was a machinist and 14-year veteran of the CTA who worked out of our Skokie Shops heavy maintenance facility.

“The entire CTA family extends our deepest sympathies to the family, friends and loved ones of this respected and dedicated professional,” said CTA President Dorval R. Carter, Jr. in the statement.

“Mr. Martinez worked very hard to make sure CTA customers had the best service possible, and took a great deal of pride in his accomplishments. I join with the men and women of the CTA in expressing our heartfelt condolences on this profound loss, and we urge everyone to remember and honor his service to CTA and Chicago.” —Rosemary Sobol

The effort, dubbed the Remote Patient Monitoring Program, will be run in conjunction with OSF HealthCare and the Southern Illinois University School of Medicine, Pritzker said during his daily news briefing at the James R. Thompson Center in the Loop.

“This moment is understandably grueling in just about every aspect for so many people,” Pritzker said. “We are living in a deeply unprecedented moment and holding the emotional ramifications of that inside will only be hard on you. Know that it’s OK to feel. And please know that you don’t have to feel it all alone.”

The program is designed to bring healthcare and mental health services with a focus on “underserved communities and those at risk during the COVID-19 pandemic,” according to a news release from the governor’s office.

That brings the statewide totals in Illinois to 19,180 known cases and 677 deaths, according to state figures.

Saturday’s death toll was one shy of the state’s highest daily total 82 deaths on Wednesday. The highest daily new known case total was also set Wednesday, when 1,529 cases were recorded.

Gov. J.B Pritzker expressed optimism about the direction of the rate of COVID-19 cases in Illinois.

Asked if the state now had enough medical supplies, Pritzker said “we are going to continue to need more” personal protective equipment.

As for ventilators, Pritzker said the state is still trying to buy more of the machines, adding that the predictive models vary on how many the state might need.

“We don’t know exactly what we need,” Pritzker said. “I’d rather be wrong and have too many than have too few.” —Bill Ruthhart

The so-called serology tests use a blood sample to detect antibodies to the virus rather than the virus itself. Such tests, the first of which received emergency FDA approval earlier this month, are different than the nasal swab tests that have been used to determine whether an individual actively has COVID-19.

The antibody tests, which determine whether an individual previously contracted the coronavirus and is likely to be immune currently, are viewed as crucial in understanding the risks to the country’s population moving forward.

If an individual tests positive for the antibodies, which are likely to show up within two to six weeks of infection, health officials believe they’re not going to get sick or spread the virus, because their bodies are killing it off.

As elected officials have searched for ways to jumpstart the nation’s economy, some have suggested those with antibodies could leave self-isolation and return to work sooner than those who have yet to contract the coronavirus.

For now, Arwady said the testing is in its infancy and she cautioned the city is using it in conjunction with the nasal tests to get a feel for the serology test’s accuracy. She noted that the antibody tests currently have a higher rate of false-negative and false-positive results. Read more here. —Bill Ruthhart

Mason, a key player in the coordination of the response to the COVID-19 pandemic, was fired earlier this month after seven years on the job. Dr. Kiran Joshi and Dr. Rachel Rubin, who had replaced Mason on an interim basis, have been given the jobs permanently.

“Here at Cook County Health, many of our patients are from communities that are disproportionately affected during this pandemic: they are poor, they are immigrants, they are people of color. Dr. Rubin and Dr. Joshi understand the unique set of challenges posed with this kind of patient care and recognize that health inequities are only amplified during a crisis like this pandemic,” Preckwinkle said. Read more here. —Cecilia Reyes

Arwady said the latest numbers show that Chicago has about 40% of the confirmed coronavirus cases in the state.

“They were half or more than half,” Arwady said. “In Chicago, that’s a sign that the measures we’ve put in place have been working.

”The same trend has been true for COVID-19 deaths, she said.

“The deaths in Chicago residents are about 35% of the deaths we’re seeing across Illinois, again a sign of — where we were half — some improvement although there is a long way to go, and we do expect those deaths to continue to increase,” Arwady said.

Arwady said the city had experienced an additional 659 confirmed cases of COVID-19 and 16 deaths from the coronavirus in the last 24 hours.

Overall, the city has 7,278 lab-confirmed cases of the virus and the pandemic has claimed 212 lives in the city, Arwady said. The city’s top health official, however, also said the city was seeing progress in flattening the curve when it comes to the increase in new cases and deaths.