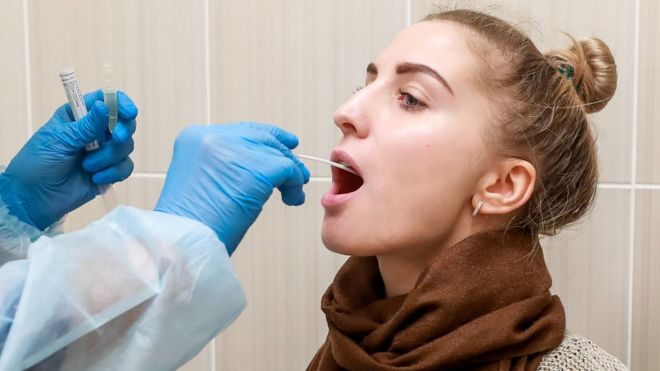 Testing is seen as key to tackling coronavirus and the UK hopes to rapidly increase the number of people tested in the coming weeks.

But how does the UK’s approach compare with that of other countries and who can get tested?

How many tests is the UK doing?
The number of daily coronavirus tests reached about 7,000 over the weekend. The government says it wants to test 10,000 a day by the middle of this week, and 25,000 by mid-April.

According to the latest figures, 127,737 people in the UK have been tested for coronavirus so far.

The majority of these tests have been on seriously ill hospital patients with symptoms of the virus. 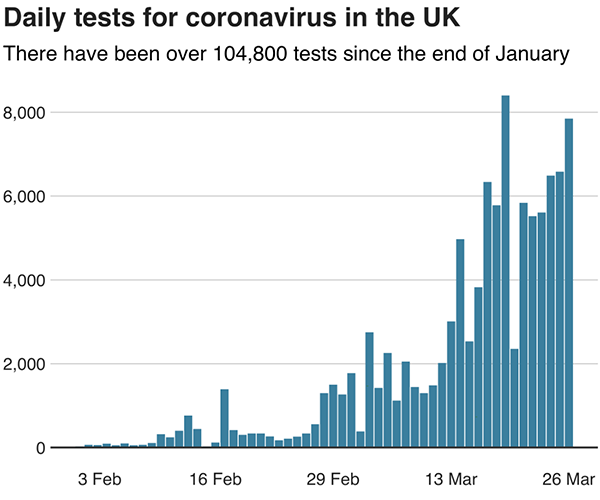 Testing is now being rolled out to NHS staff workers – to check whether they currently have the disease.

Critical care doctors and nurses are being tested first, followed by staff in emergency departments, paramedics and GPs. Tests for social care workers will follow.

The government says this will give those who test negative “security in the knowledge that they are safe to return to work”.

How does this compare with the rest of the world?
The UK is lagging behind comparable countries like Italy, Germany and South Korea when it comes to how many tests are being carried out per million people.

In total, 1,881 people per million UK citizens have been tested, as of 29 March.

Germany, which is at a similar stage to the UK, had already conducted 5,773 tests per million inhabitants by 26 March.

And the US, which has rapidly scaled up its testing in recent days, reached 2,541 tests per million on 28 March.

The director general of the World Health Organization (WHO), Tedros Adhanom Ghebreyesus said he had a “simple message” for all countries: “Test, test, test.”

He added: “We cannot stop this pandemic if we do not know who is infected.”

Why can’t the UK test the general public?
There are two main reasons for testing people – to diagnose them individually, and to try to understand the spread of the virus. This is called surveillance testing, but is not being done by the UK at present.

Not testing more widely means that many people might be self-isolating for no good reason, including NHS workers. Healthcare staff have also raised concerns that they could be spreading the infection unknowingly.

The UK does not have the resources in terms of equipment to do mass testing at the moment, although the government is trying to increase its capacity.

What kind of tests are available?
There are two main types of coronavirus test.

The antigen or “have I got coronavirus now?” test will tell you if someone is currently infected and risks spreading it to others. This is the test now being rolled out to NHS staff.

How does the antibody test work?
Antibody tests use a drop of blood on a device a bit like a pregnancy test.

These could help work out how widespread the disease has been and whether people are safe to go back to work.

The government said it has bought three-and-a-half million of these tests and plans to make them available “very soon”, if they can be proved to work.

On Monday, infectious disease expert Prof Neil Ferguson said that it was hoped the tests would start rolling out “within days”.

Can I buy a private test?
You can, but Public Health England advises against it, as it says there is not yet enough information about them.

“It is not known whether either a positive or negative result is reliable,” reads a statement on its website.

A private healthcare clinic in London defended its decision to charge £375 for a test.

Reports suggest other firms have also increased the price of their testing kits.