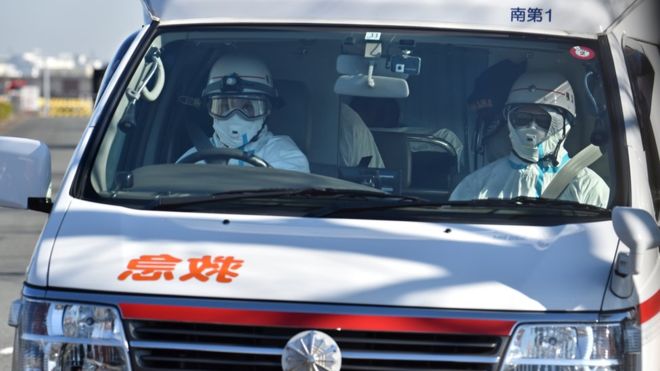 Doctors in Japan have warned that the country’s medical system could collapse amid a wave of new coronavirus cases.

Emergency rooms have been unable to treat some patients with serious health conditions due to the extra burden caused by the virus, officials say.

One ambulance carrying a patient with coronavirus symptoms was turned away by 80 hospitals before he could be seen.

Japan, which initially appeared to have the virus under control, passed 10,000 confirmed cases on Saturday.

More than 200 people have now died with Covid-19 and the capital Tokyo remains the worst-affected area.

Groups of doctors at GP surgeries in the city are assisting hospitals with the testing of potential coronavirus patients in order to ease some of the pressure on the health system, officials say.

“This is to prevent the medical system from crumbling,” Konoshin Tamura, the deputy head of an association of GPs, told Reuters news agency.

“Everyone needs to extend a helping hand. Otherwise, hospitals would break down,” he added.

This is a stark warning.

Two medical associations said the coronavirus outbreak was reducing the ability of Japan’s hospitals to treat other, serious, medical emergencies.

Hospitals are already turning away patients, and all this while the number of confirmed cases of Covid-19 remains relatively low compared with other countries.

Doctors have complained of a lack of protective equipment, which suggests Japan has not prepared well for the virus. This is despite the fact it was the second country outside China to record an infection, way back in January.

Meanwhile, Prime Minister Shinzo Abe has been criticised for not introducing restrictions to deal with the outbreak sooner for fear they could harm the economy.

His government has argued with the governor of Tokyo, who wanted tougher measures introduced more quickly.

Only on Thursday did Mr Abe extend a state of emergency to the whole country.

The government is also working to increase the rate of testing by introducing drive-through facilities. In recent weeks, Japan has conducted far fewer tests than in other countries and experts say this has made it more difficult to track the spread of the disease.

Last month it conducted just 16% of the number of PCR (polymerase chain reaction) tests that South Korea did, according to data from Oxford University.

And unlike South Korea – which has brought its outbreak largely under control through a programme of large-scale testing – the Japanese government said that carrying out widespread testing was a “waste of resources”.

Testing is also governed by local health centres, not on the national government level – and some of these local centres are not equipped to carry out testing on a major scale.

But, on Friday, Prime Minister Shinzo Abe indicated that the government was shifting its policy on testing and rolling it out more widely.

“With help from regional medical associations, we will set up testing centres,” he told a news conference.

“If home doctors have decided testing is necessary, test samples are taken at these centres and sent to private inspection firms” he said. “Thus, the burden on public health centres will be lessened.”

His comments came shortly after he announced a nationwide state of emergency due to the worsening outbreak.

The move allowed regional governments to urge people to stay inside, but without punitive measures or legal force. It will remain in force until 6 May.

After the initial state of emergency came into force on 8 April, a number of other regional governors called for the measures to be extended to their areas, saying that cases were growing and their medical facilities were overwhelmed.

And the mayor of Osaka appealed for people to donate their raincoats, so they could be used as personal protective equipment (PPE) for health workers whom he said were being forced to fashion PPE out of rubbish bags.

In other global developments:

Singapore’s health ministry confirmed 942 more coronavirus infections on Saturday, a new daily record. Singapore has been praised for its handling of the outbreak, but case numbers have recently risen
The World Health Organization (WHO) advised countries to plot a cautious path out of lockdown rather than relying on antibody tests
US President Donald Trump defended tweets that appeared to encourage protesters to “liberate” states – run by the opposition Democrats – where stringent lockdown measures are in place
The UK death toll reached 14,576 as 847 new death were reported in hospitals
And as world coronavirus deaths passed 150,000, more than 4.5 billion people are now living under containment to slow the pandemic

The US reported nearly 700 deaths today