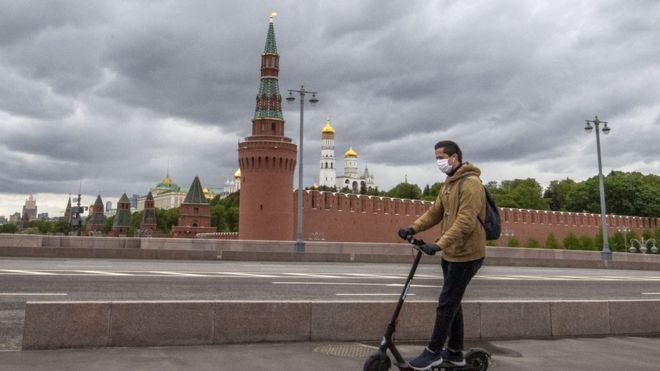 Authorities in Moscow have eased lockdown restrictions, even as case numbers continue to rise.

Parks and shopping centres in Russia’s capital reopened and people were allowed out for walks and limited exercise for the first time in nine weeks.

President Vladimir Putin announced last week the country had passed the peak of its outbreak.

But infections are still rising, and some question lifting restrictions.

Russia reported another 9,035 cases and 162 deaths on Monday. In total the country has recorded 414,878 infections – the third-highest number in the world after the US and Brazil – and a death toll of 4,855.

Officials say the low numbers of deaths is due to high testing numbers. Critics however fear the true number is far higher.

A number of other European nations are also easing restrictions on Monday:

Restaurants, cafes and museums open in the Netherlands, with bars serving customers again in Norway

The Colosseum in Rome is once again allowing visitors, while the Grand Bazaar and Fatih mosque reopen in Istanbul

What’s happening in Moscow?
Moscow has been the epicentre of Russia’s outbreak. In May Mayor Sergei Sobyanin said he feared the number of cases there could be three times higher than reported.

Now, Mr Sobyanin has ordered a swathe of businesses to reopen in the city from Monday – including car dealerships, book shops, launderettes and shopping malls.

Parks too are allowing visitors, with new exercise rules announced. Mr Sobyanin said people would be allowed out for walks three times a week between 09:00 and 21:00, using a rota system determined by their home address.

Residents can also go outside for exercise, but only between 05:00 and 09:00, and only if they wear a face mask.

However, authorities said a ban on public gatherings would remain in place until at least 14 June.

Some have mocked the rules on exercise. Comedian Maxim Galkin published a video on Instagram in which he impersonates the mayor and President Putin discussing a “breathing schedule” for Muscovites, which has been viewed more than six million times.

It’s been a grey and rainy first day out of lockdown as Muscovites were allowed out for exercise at last – albeit only three days a week – and city parks and shops reopened for business.

Facemasks are now mandatory though plenty of people take that quite loosely, stringing them round their chins.

This relaxing of the coronavirus restrictions is happening with the infection rate in Russia’s capital still stubbornly high and about 70 confirmed Covid-19 deaths each day.

But officials here insist that the worst has passed and Vladimir Putin certainly wants to move on. He’s already rescheduled the 75th anniversary Victory Day parade for later this month. He has now announced that a key vote on constitutional reforms, which would allow him another two terms in office, will take place on 1 July.

It’s thought the Kremlin’s keen to hold it before the strain of Covid-19 on the country’s economy, and Mr Putin’s approval rating, really show.

Why relax restrictions now?
At one point Russia reported more than 10,000 cases a day for more than a week. Moscow alone was accounting for up to 6,000 of those cases at its peak.

The rate of infections has started to slow nationwide. On Sunday, Moscow recorded 2,595 infections.

Still, some question the decision to further lift restrictions with new case numbers still so high.

The move comes after authorities doubled Moscow’s official death toll for the month of April. Journalists in the city had been accused of fake news and distortion for saying that the figure was far higher than reported.

President Putin sent some Russians back to work on 11 May, saying that although “danger remains” it was in everyone’s interest for the economy “to return to normal quickly”.

More than 27,000 people have died from coronavirus in Italy