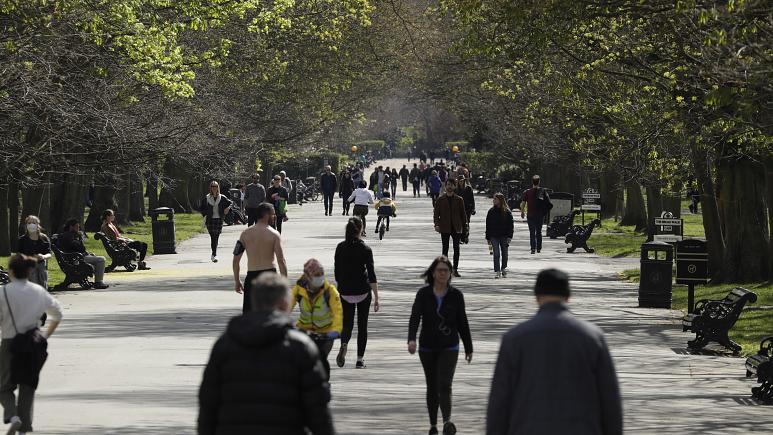 People living in London have been scolded by local authorities after thousands were reported to have spent the day outside enjoying the spring sunshine – despite warnings to stay at home.

At least one major park in the British capital was shut down after the local council said more than 3,000 people had flocked there on Saturday, with “many of them” seeming to ignore government advice in place to curb the spread of coronavirus.

Lambeth Council, which oversees Brockwell Park, said the behaviour was “unacceptable” and that the “actions of a minority” would force them to close the park on Sunday, when the weather was expected to be even warmer. 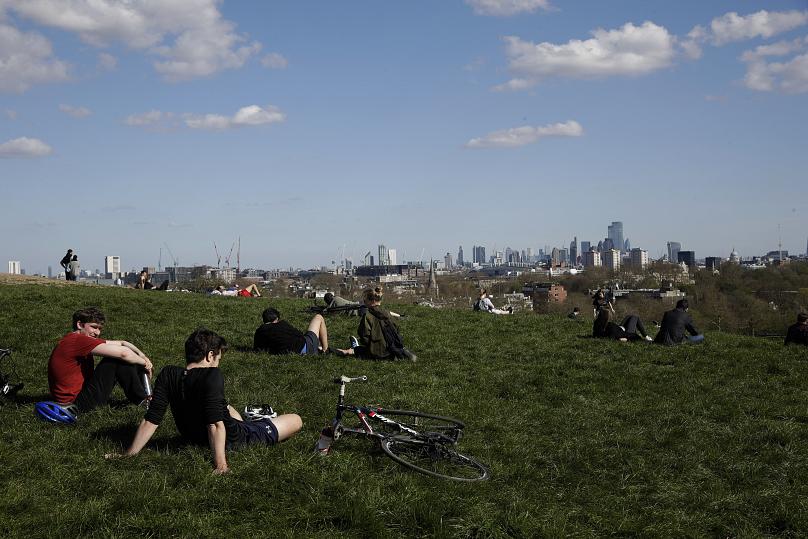 It added: “Despite clear advice, over 3,000 people spent today in Brockwell Park, many of them sunbathing or in large groups. This is unacceptable.”

“We are sorry we’ve had to take this decision. This wouldn’t need to happen if people followed the clear instructions from the government.

“We are doing this for the wider safety of the public. A minority of people have not followed the guidance – regrettably we have to act.” 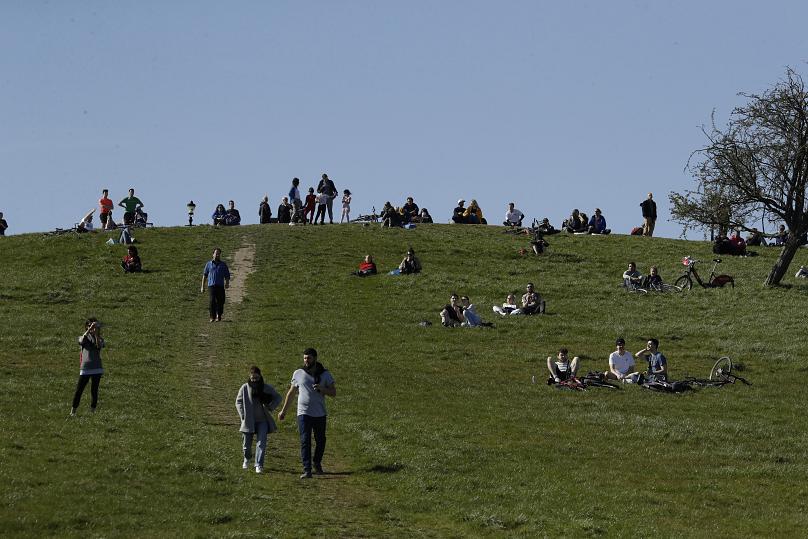 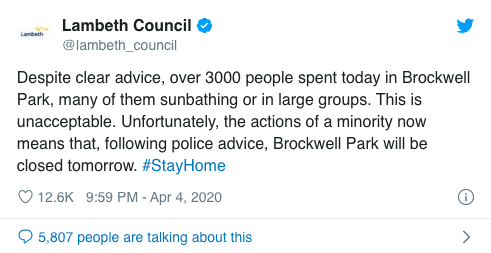 The police force in Newham said it had been called to clear dozens of people at a house party on Saturday evening.

Sharing a photo of the deserted festivities, it said: “This family thought law relating to social distancing shouldn’t apply to 18th birthday parties.”

It comes despite UK Prime Minister Boris Johnson – who has COVID-19 himself – releasing a message to urge Britons to avoid “temptation” of the spring sun over the weekend.

In a video message, he said: “There may be just a temptation to get out there, hang out and start to break the regulations. 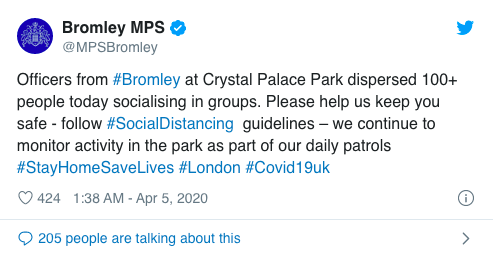 Queen Elizabeth II is due to make a rare address to the British public on Sunday evening – something she has only done outside of her annual Christmas Day speech on four other occasions.

Her first was amid the Gulf War, the second and third were held after the deaths of Diana, the Princess of Wales, and the Queen Mother. The fourth occasion was for her Diamond Jubilee.

In the televised address on Sunday evening, the monarch is expected to speak to the “increasingly challenging time” that has caused “grief to some, financial difficulties to many, and enormous changes to the daily lives of us all.”

It allows for one period of exercise outside per day (alone or with people in the household), and advises against all non-essential travel. 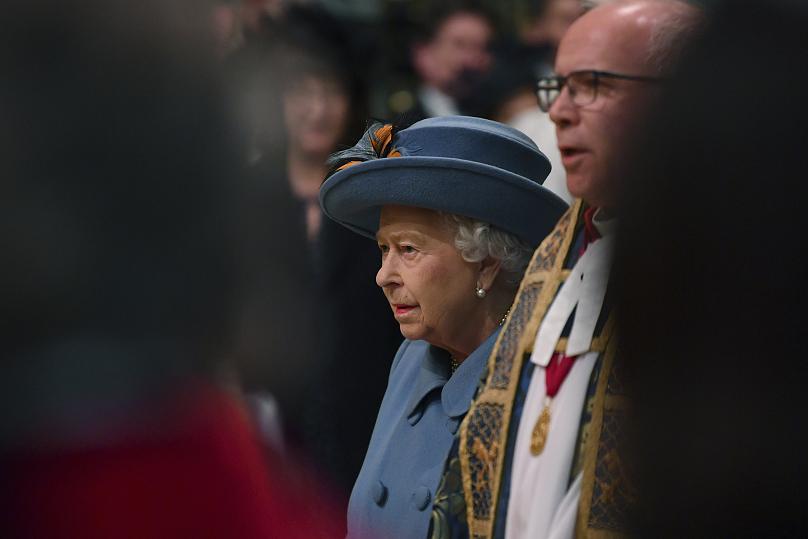 A similar sentiment on social distancing over the weekend has been shared in France, where more than 7,500 people have lost their lives – more than 2,000 of whom are believed to have been people living in nursing homes.

French Prime Minister Edouard Philippe said in a tweet: “There should be no departure on vacation in the coming days.

“You would spread the virus and ruin our collective effort for almost three weeks.

“There will be checks. I appeal to good citizenship, respect the rules of confinement. 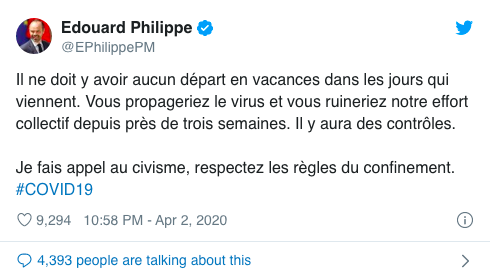 Such checks took the form of heat-seeking drones flying over Fontainebleau forest in the suburbs of Paris in a bid to find people flouting the rules.

Police patrols and roadblocks have also been put into force to stop those making non-essential trips.

Hope in Italy and Spain
There have been some hopeful signs in Europe, where latest figures appear to show social distancing measures taking effect.

Despite its high death toll, Italy has reported its first decrease in the number of people being treated in intensive care units (ICU) since the start of the outbreak.

Its death toll has also decreased: at least 684 people died on Saturday compared to over 700 the previous day, according to national media.

In Spain, the daily number of new coronavirus cases dropped for a third day in a row on Sunday – another piece of good news that suggests the rate of the national outbreak has begun to lessen.

A total of 6,023 were recorded in the last 24 hours, according to latest figures from the Spanish Health Ministry.

This is less than the number of new cases reported in the last three consecutive days.

It comes as Spanish Prime Minister Pedro Sanchez extended the country’s three-week lockdown to April 25, telling citizens: “We are in a position to bend the curve.”

Speaking at a press conference on Saturday, he warned that an eventual return to normality would “not be easy” and that a new world awaited.

“If the climb has been hard, let’s not fool ourselves, the descent will not be smoother,” he said, adding: “We are facing the great crisis of our lives.”

“The world that is coming, in which we are already, will not be like yesterday, but even less will be like the day before yesterday.”

It has also overtaken Italy in its number of cases to become the second worst virus-hit country in the world – behind that of the US.

Any consideration of relaxing stringent lockdown measures during this time “would have a worse result than returning to the starting point,” Sanchez said.

What is behind Nigeria’s unexplained deaths in Kano?