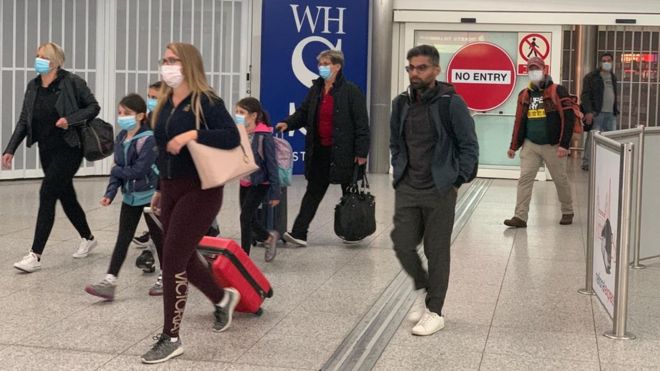 New rules requiring all people arriving in the UK to self-isolate for 14 days have come into effect.

Those arriving by plane, ferry or train – including UK nationals – must give an address where they will self-isolate. Rule breakers will be fined.

Home Secretary Priti Patel has said the laws were designed “to prevent a second wave” of coronavirus.

But the boss of Ryanair has said the rules are a “political stunt” and are not a quarantine.

He claimed even the Home Office acknowledged the rules were unenforceable.

Some industries have warned they will be severely impacted by the rules, and Mr O’Leary warned of devastation.

Despite criticism from businesses, Ms Patel has said the measures are “proportionate” and being implemented “at the right time”.

What are the new rules?
People arriving in the UK should drive their own car to their destination, where possible, and once there they must not use public transport or taxis.

Arrivals must not go to work, school, or public areas, or have visitors – except for essential support. They are also not allowed to go out to buy food, or other essentials, where they can rely on others.

Those arriving in England, Wales and Northern Ireland could face a fine of £1,000 if they fail to self-isolate for the full 14 days, while they face a £480 fine in Scotland. The maximum fine for repeat offenders in Scotland is £5,000.

Almost all travellers have to fill in a “public health passenger locator” form on arrival. Failure to do so could lead to a penalty of £100, or travellers may be refused entry.

If they are unable to provide an address, the government will arrange accommodation at the traveller’s expense. It says there will also be checks to see whether the rules are being followed.

‘Complex’ rules
Anyone arriving from the Republic of Ireland, the Channel Islands or the Isle of Man does not have to complete a form or enter quarantine.

There are also exemptions for workers in some industries such as road haulage and medical professionals who are providing essential care.

The union representing UK Border Force staff said the rules were complex and they were not fully prepared.

Lucy Moreton, professional officer at the Immigration Services Union, told the BBC that technical papers explaining what to check for only arrived on Friday and were still not available to those operating on the front line. She said there 42 categories that were exempt from the quarantine rules.

Ms Moreton added there was no system for checking addresses and only flagrant rule-flouters – such as using the name Mickey Mouse – would be picked up.

The travel industry has been vocal in its criticism of the government’s quarantine rules, warning that the isolation period will deter visitors and put jobs at risk.

The manufacturing industry has also highlighted that fewer flights will restrict imports and exports, which will have a knock-on effect for the freight industry, as well as hampering the recovery of some businesses. 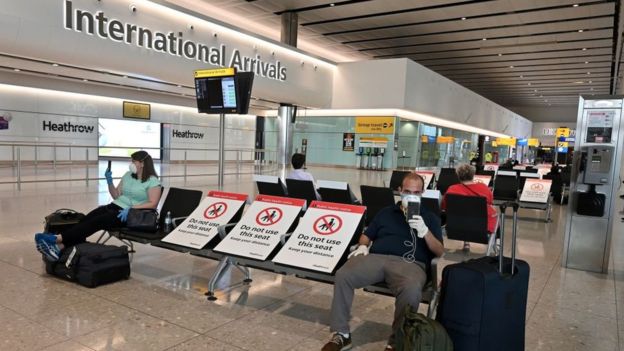 British Airways, EasyJet and Ryanair have written to Procurator General Sir Jonathan Jones, the government’s most senior legal official – the first stage required when taking legal action against the government.

The airlines say they are prepared to ask for a judicial review into the government’s travel quarantine rules.

Travel trade body Abta has called on the government to urgently create a roadmap for restarting international travel, while the UK’s biggest airport services company, Swissport, has warned it could deliver a “killer blow” to the tourism sector.

Industry leaders wrote to Prime Minister Boris Johnson in May asking that the government avoid taking a “blanket approach” to quarantine, suggesting so-called “air bridges” with countries that have low coronavirus rates.

Aviation, maritime and rail industry leaders were invited to discuss the new quarantine plans but British Airways refused to attend the meeting, and aviation bosses told the BBC that they were not impressed by the content of the call.

Government sources have told the BBC that the UK is hoping to secure air bridge agreements with certain countries, such as Portugal, Spain and France, as well as Australia and Singapore.

But the government’s position is that the idea is only “under consideration”.

The global death toll has passed 400,000, according to data collected by Johns Hopkins University

Nearly 58,000 students are going back to school at coronavirus ground zero