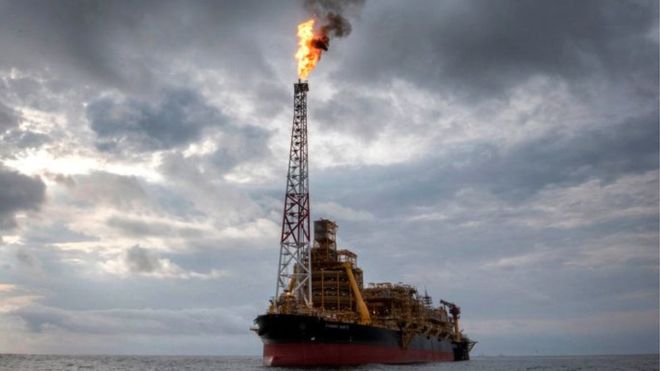 The price of a barrel of Brent Crude – the UK benchmark for oil – has slipped below $20, its lowest level since 2002.

The close to 20% slump follows negative prices being recorded for a barrel of West Texas Intermediate (WTI), the benchmark for US oil.

Negative oil prices on Monday were a “quirk”, says one market expert.

The price of US oil – which slumped to minus $37 a barrel at one point – was produced by a trading deadline and is now back to a positive figure.

He reckons the unprecedented price movement confirms that near-term demand is very weak.

“But it isn’t cataclysmic,” he said. “We don’t see negative oil prices as a new normal, going forward.” 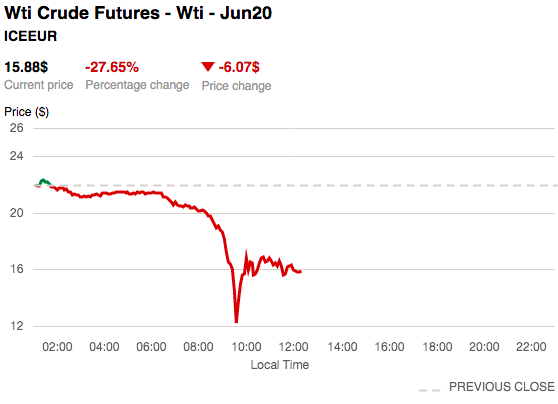 Oil prices have weakened sharply because of a combination of oversupply and a collapse in global demand due to the decline in economic activity caused by coronavirus lockdown measures.

What happened?
The price of oil that we see reported is actually the future price of oil. Futures are essentially contracts to deliver the physical commodity at a later date.

So when we look at oil prices, we are actually seeing the market price for future months. 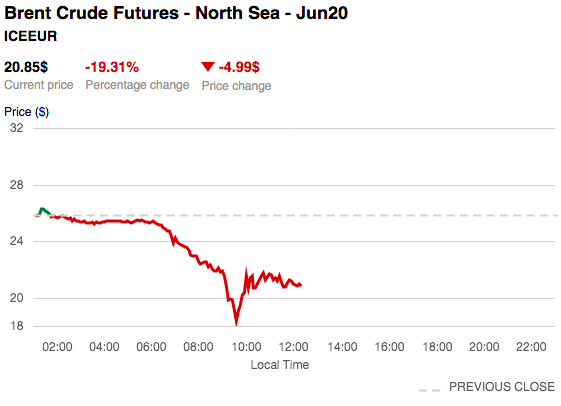 As the delivery date approaches, these contracts need to be rolled over to the subsequent period.

The price of a barrel of West Texas Intermediate (WTI), the benchmark for US oil, fell into negative territory for the first time in history on Monday.

But that only related to the May contract, which was about to expire.

Traders holding the contract were unable to find buyers, because no one with the ability to take delivery wanted it.

“Nobody wants to take delivery of oil next month because there’s nowhere to store it, so the price dropped below zero,” explained Rachel Winter, associate investment director at Killik & Co. 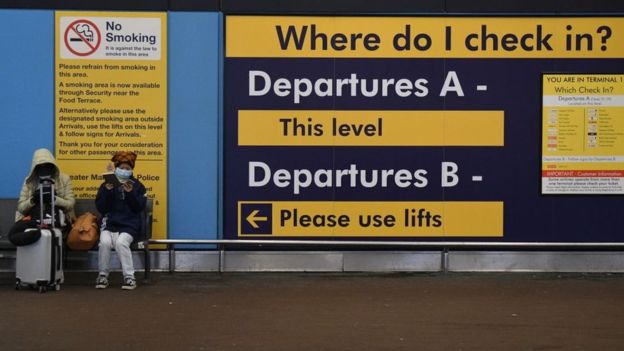 The collapse in physical demand for crude products like petrol and jet fuel has left storage hubs at capacity or, as one trader put it: “They’re close to the brim.”

Storage at US oil hub Cushing has already grown to more than 15 million barrels in the past month – and is expected to soon be at capacity for the first time ever.

“Coronavirus is rewriting the rules of the global economy in front of our very eyes,” said Adam Vettese, analyst at eToro.

“With oil demand virtually non-existent, this quite amazing sell-off is almost entirely down to fears over storage.”

Does that mean oil prices will fall further?
“Oil prices and associated equities in the sector will remain broadly weak over the near term,” predicted James Trafford.

He said the supply cuts recently agreed by the Opec group of oil-producing economies were not likely to be sufficient to balance the market any time soon.

Opec is believed to be looking to cut oil output immediately, rather than waiting until next month, to ease the pressure on price. 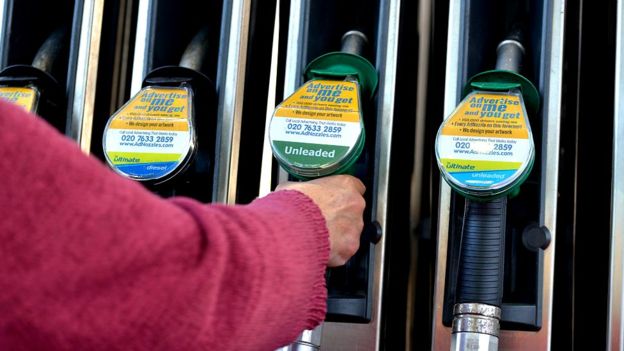 “While Monday’s negative WTI futures price might have been a one-off glitch, it does confirm there is trouble ahead,” said Artur Baluszynski, head of research at Henderson Rowe.

“The Covid-19 crisis is destroying the global demand for energy and without a timeline on the end of the lockdown in the developed world, the market is suffering from chronic oversupply.”

That means that what motorists pay is not directly linked to crude. Instead, suppliers control the prices they sell petrol at.

Crucially, a key factor affecting the price of fuel is that the biggest proportion of the money you hand over for a litre of petrol in the UK goes to the government in the form of tax.

Below £1 a litre?
Could this week’s oil price turmoil see prices drift below £1 for the first time since the late 2000s?

“In theory, petrol prices could fall below £1 per litre if the lower wholesale costs were reflected at the pumps – but at the same time, people are driving very few miles, so they’re selling vastly lower quantities of petrol and diesel at the moment,” pointed out RAC fuel spokesman Simon Williams.

This means many forecourts will be reluctant to trim their prices any further, he said.

At the same time, he said, more price pressure on petrol could hit the viability of independent garages, which provided “a vital service in areas where the supermarkets don’t have a foothold”.

“It would be bad news all round if these forecourts shut up shop for good.”

Are pump prices fair?
Since the end of March, the wholesale price of petrol has been around the 16p a litre mark, according to the AA.

“Add fuel duty at 57.95p a litre, a generous 9p a litre supplier/retailer margin, plus VAT and the average pump price of petrol would normally be around £1 a litre,” said the AA’s fuel spokesperson Luke Bosdet.

Instead, the average pump price is higher because the retailers say they need to charge 10p a litre more to offset the lower volumes of fuel they are selling, he pointed out.

Journey levels are at about 40% of normal during the working week, falling to 20% by Sunday.

This meant those who were still driving were being “overcharged on average by more than a fiver a tank”.

“I suspect that when the lockdown comes to an end, coronavirus is beaten and driving starts to return to normal, questions will be asked about the fairness of pump prices during the great oil crash of 2020.”

‘It’s Just Too Much’: Cops Raid Nashville Home After Bombing