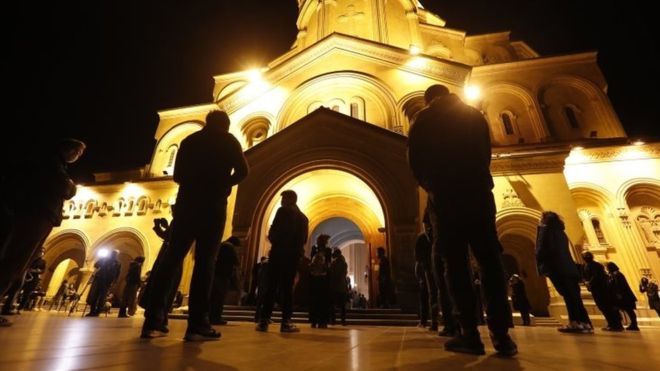 The world’s Orthodox Christians are celebrating Easter – the most important festival in their calendar, amid a series of restrictions and bans.

Officials in Europe, the Middle East and Africa urged people not to attend services, fearing this would lead to a spike in coronavirus infections.

However, in Georgia, worshippers are still able to attend churches.

The traditional Holy Fire ceremony went ahead in a near-deserted Church of the Holy Sepulchre in Jerusalem.

The church was closed last month and only a handful of Orthodox clergy, some of them wearing black masks, were allowed in for the ceremony on Saturday. 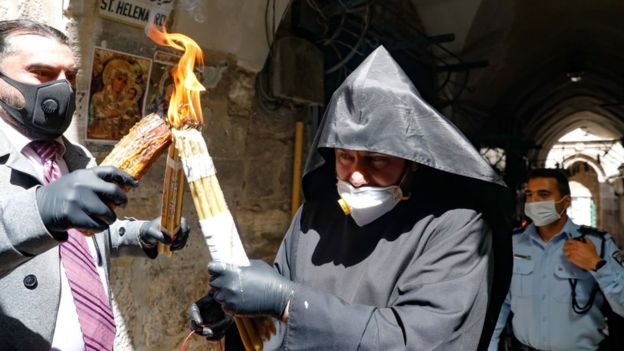 A candle is traditionally lit with the Holy Fire in the crypt of the Holy Sepulchre by Greek Orthodox Patriarch Theophilos III, to symbolise the resurrection of Jesus.

Instead of the flame being passed on to thousands of pilgrims, this time the ceremony was attended by the Armenian Orthodox patriarch, four assistants and Coptic and Syrian archbishops, Israeli media report.

The church bells tolled and the flame was carried out of the church by Theophilos III and others to be taken to Ben Gurion airport near Tel Aviv and flown to 10 countries.

How is Orthodox Easter being marked around the world?
Russia’s Orthodox Church agreed to break its annual traditions and is urging millions of believers not to attend church. Worshippers usually attend late-night processions to receive blessings.

This year services are being held only in the presence of priests and other clergy. 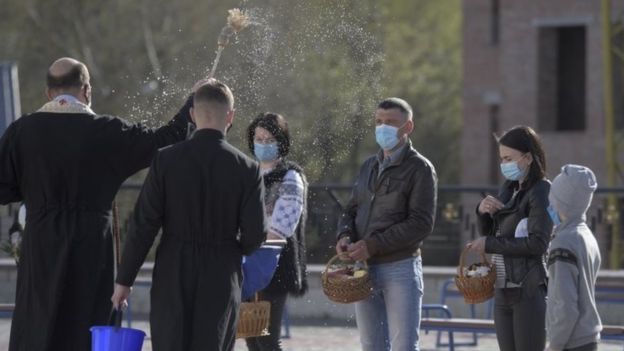 In Ukraine, police are now deployed near churches in the capital Kyiv and elsewhere to prevent believers from gathering in large numbers.

In Greece, the authorities are using drones to monitor the situation. Road blocks have been set up to prevent the customary exodus of several million people to the countryside and the islands.

When the Holy Fire arrived in Athens on Saturday evening it was taken to the Jerusalem patriarchate in Athens and was not distributed to churches elsewhere.

The Church has backed the ban and thousands of police have been deployed to prevent Greeks using the holiday to visit relatives or second homes.

The Holy Fire was also taken on Saturday to the Church of the Holy Nativity in the Palestinian town of Bethlehem in the occupied West Bank.

Egypt’s Coptic Orthodox Pope Tawadros II held a Good Friday service without a congregation at a monastery north-east of Cairo. The service was televised live on Coptic Orthodox TV channels and showed deacons and priests gathered with gaps between them to prevent the spread of Covid-19.

In Romania, people have been told they will not be allowed to leave their homes to receive the Holy Fire on Easter night or take bread splashed with holy water and wine, as is traditional.

It will however be distributed to the homes of believers who request it. President Klaus Iohannis appealed to Romanians to give up on the idea of having their loved ones close to them, in order to prevent the spread of the virus.

Bulgaria has imposed a curfew on the capital Sofia to stop traffic in and out of the city to stop people heading off on holiday.

Churches in Serbia and Montenegro have told worshippers to celebrate Easter at home.

But North Macedonia’s Orthodox Church says it will not use force to prevent people going to church.

Why Georgia is different

It’s never been this quiet in Tbilisi.

The government has banned the movement of all private cars ahead of Easter Sunday. Cemeteries, which Georgians traditionally visit on Easter Monday, are also shut.

Those violating the state of emergency law, which among other restrictions bans gatherings of more than three people, face hefty fines of almost £800 ($1,000; €900).

And yet many Georgians are questioning why the government made an exception for the Orthodox Church. Thousands have continued to worship freely in churches across the country since the crisis began. 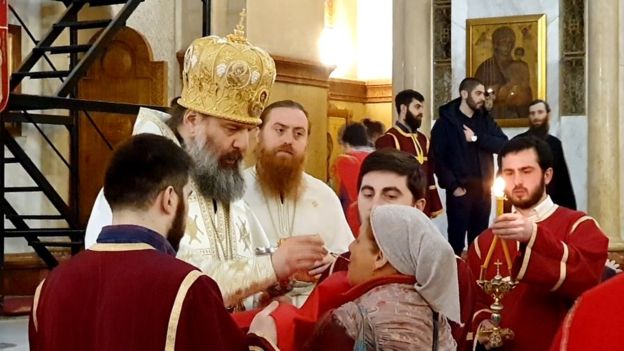 The Church has refused to adapt its customs. Priests continue to give Holy Communion with a shared spoon.

At least two priests have already tested positive for Covid-19. But the Easter midnight service went ahead.

Parishioners were welcomed at Tbilisi’s Sameba Cathedral despite a curfew. The country’s health authorities have pleaded with people to listen to the science for the sake of their country.