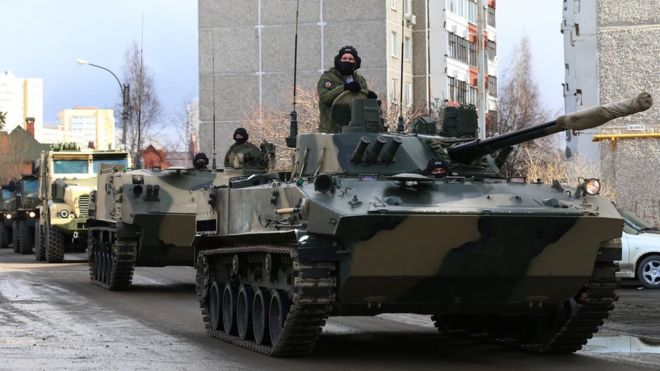 Russian President Vladimir Putin has postponed the 9 May Victory Day parade in Moscow’s Red Square because of the coronavirus pandemic.

This year sees the 75th anniversary of the Soviet victory over Nazi Germany in 1945, and the annual military parade has not been postponed before.

Mr Putin said Russia was facing a difficult choice: 9 May was sacred, but so was the life of every person.

World War Two veterans had appealed to him to move the event.

Russian officials reported a new record increase of 3,448 coronavirus infections on Thursday, bringing the total to 27,938 cases. Officially there have been 232 deaths, but the real number is believed to be higher.

Lockdown rules to curb the spread of Covid-19 disease are in force throughout Russia. People have been told to leave home only if absolutely necessary, maintain social distancing and wear face masks.

Mr Putin said the parade would still be held later this year, though he did not name a date.

He has restored Soviet-era symbols, banners and the full military might that characterised Soviet Victory Day during the Cold War.

Mr Putin told his Security Council the “risks associated with the epidemic, whose peak has not passed yet, are extremely high”, and “this does not give me the right to begin preparations for the parade and other mass events now”.

On Wednesday the head of the war veterans’ association, Vladimir Shamanov, said the parade could take place instead on 24 June – the day when Soviet Marshal Georgy Zhukov led the 1945 parade – or 3 September, the day that World War Two ended.