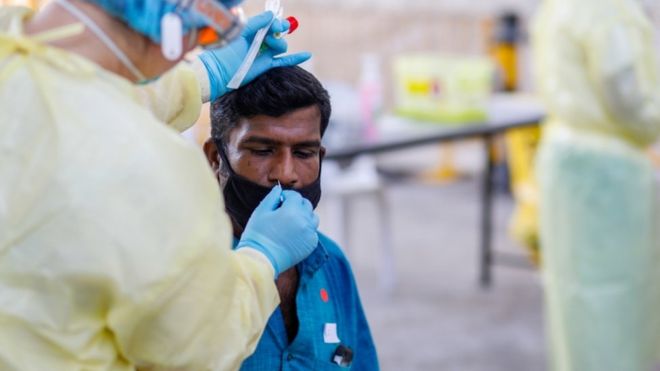 Singapore has seen its biggest number of new cases in a single day, driven by increased testing of foreign workers.

Once praised for its success in containing the virus, Singapore is now facing a surge of infections linked to industrial worksites and tightly packed worker dormitories.

On Thursday, 728 new cases were reported, bringing the total number of cases to 4,427.

Almost 90% of these infections have been linked to these workers.

The number is expected to rise as more workers get tested in the coming days to help identify the scale of the problem.

Around 300,000 low-wage workers, mostly from South Asia, work in Singapore in construction and maintenance.

Most of them live together in huge dormitory complexes on the outskirts of the city they’ve helped build.

Singapore is currently in its own version of a semi-lockdown, which it refers to as a “circuit breaker”.

Under this, all non-essential businesses are closed, non-essential worker must stay at home and social gatherings of all sizes in both public and private spaces have been banned.

Singapore’s new quarantine zones
Of the 728 new cases reported on Thursday, 654 were residents of dormitories.

The biggest dormitory cluster, S11 Dormitory @ Punggol, now accounts for a total of 979 confirmed cases, 22% of all cases in the country.

Thousands of healthy workers have now been moved out to floating dormitories, sports halls and vacant public housing buildings in an attempt to isolate them and minimise the risk of infection. 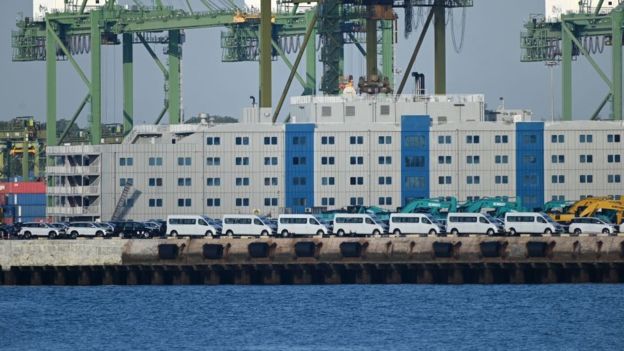 But 12 dormitories have been marked as isolation areas – no-one can enter or leave and workers are confined to their rooms, with meals delivered to them.

It’s not clear how many of them currently share a room now during the quarantine period, but in 2015 the BBC visited a dormitory complex which housed 12 people per room.

Alex Au, of non-profit organisation Transient Workers Count Too (TWC2), told the BBC that there were sometimes as many as 17 people in a room. 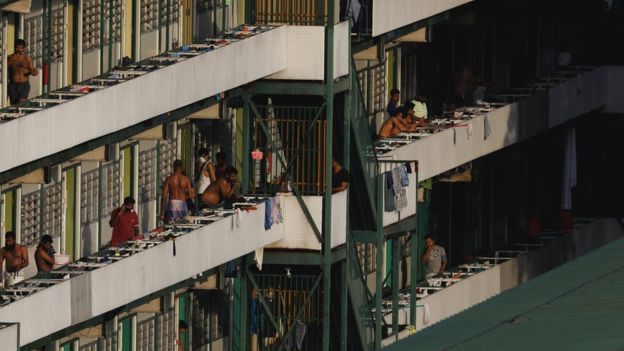 “The government’s rule is 4.5sq m of floor space per person, averaged out across all living spaces including kitchens etc. Even if licensed purpose-built dorms adhere to this, it is very cramped,” Catherine James of the Humanitarian Organisation for Migration Economics (HOME) told the BBC.

“Keeping them in such living conditions creates systemic vulnerabilities waiting to erupt. Not only during pandemics but even with smaller-scale disease outbreaks like tuberculosis.”

An earlier report by local news outlet the Straits Times spoke to workers who said they were living in unsanitary conditions.

The government has since said that the cleanliness and sanitation of several dormitories that were set as isolation areas had been “vastly improved”.

Authorities also said they were paying “close attention” to the welfare of foreign workers, adding that those in quarantine will have their salaries paid.

‘They feel abandoned’
Singapore said earlier this week that around 5,000 workers would be tested this week, including those who do not show symptoms but are close contacts of confirmed cases.

The Ministry of Health has said the increase in figures is “in line with our continued efforts to actively test and isolate the infected workers”.

However, Mr Au of TWC said the current testing measures were insufficient, referring to one incident where 16 roommates of one infected worker were not immediately tested for the virus, but instead isolated in their rooms.

“They’re waiting for symptoms to show before they test. That seems to be reactive instead of proactive,” said Mr Au.

He added that some workers said that they felt abandoned.

“They’re beginning to have a sense that they are just kept there and are waiting to get the virus,” he said.

He questioned why it had taken this outbreak for Singapore to pay attention to the living conditions of its migrant workers.

“I hope this will tell us that cheap labour has a cost. Right now we are paying the cost,” said Mr Au.