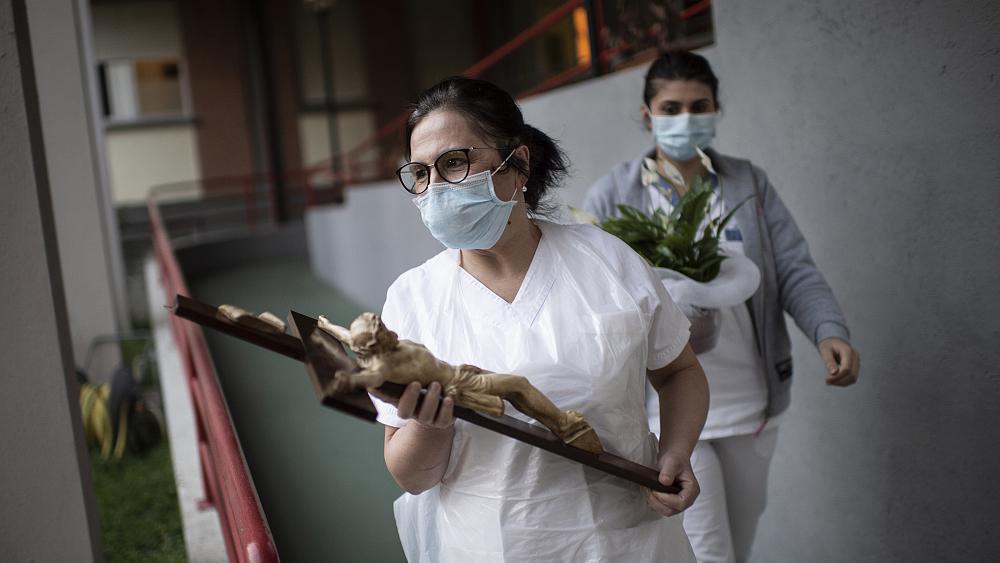 Spain reported its lowest daily death count in three weeks after 510 people died of the coronavirus between Friday and Saturday.

It comes as the global death toll of the deadly coronavirus passes 100,000, and as Europe’s worst-hit nation Italy extended its lockdown for three more weeks until May 3.

France recorded the death of a 10-year-old child on Friday, while the UK reported that 980 people died of COVID-19 in hospital in one day. That marked the highest daily death toll of any European country since the start of the coronavirus pandemic.

He said that despite data suggesting that the rate of increase in the number of people being hospitalised with the virus was levelling out, it is too soon to determine whether the peak of coronavirus infections in the country has passed.

On Friday, the government said a total of 8,958 people had died in hospital after testing positive for the new coronavirus, up 980 from the previous day.

In France, more than 13,000 people have died, including a “child under the age of 10”, said Jérôme Salomon, the country’s director general of public health.

On Friday it was announced that 554 died in 24 hours, and a total of 4,599 since the pandemic began in nursing and care homes – which is 433 more than previously recorded.

For the second consecutive day, the number of patients in intensive care has decreased: 7,004 people are in intensive care, 62 less than Thursday, said Salomon, who described the situation as “a pale ray of sunshine”.

The French government has also extended the length of time for abortions by pill from 7 weeks to 9 weeks, likely to prevent in-clinic surgical abortions.

As Europe goes into Easter weekend, warnings have been stepped up in countries such as France, Spain and the UK for people to respect lockdowns, despite hot weather.

EU finance ministers have agreed an economic rescue plan worth more than €500 billion across the eurozone, designed to help workers, businesses and health services cope with the impact of the pandemic.

The Eurozone’s €500 billion coronavirus rescue package will not unleash more austerity on Europe, and some of the funds will be open to EU countries outside the single currency, European Commission Executive Vice-President Valdis Dombrovskis told Euronews in an exclusive interview on Friday.

“Basically the only requirement is that this money is going to be spent directly or indirectly to the health-related measures and measured related to the coronavirus response,” Dombrovskis said.