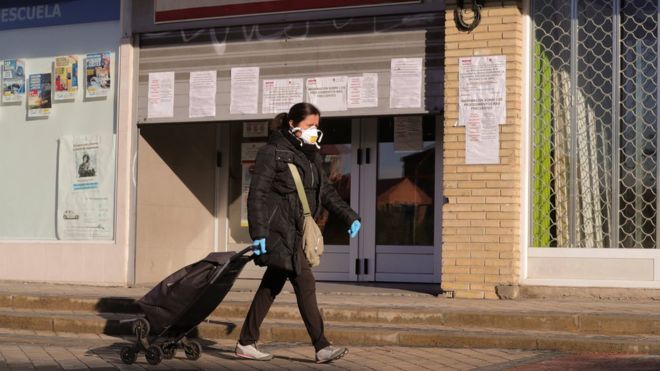 Spain has lost almost 900,000 jobs since it imposed strict measures to fight the coronavirus, another sign of the economic impact of the outbreak in Europe’s second worst-hit country.

March’s figure is the highest monthly rise in unemployment ever recorded in the country, which already had one of the eurozone’s highest jobless rates.

Spain banned all but essential outings and shut most businesses in mid-March.

It has marked another grim milestone as the number of dead passed 10,000.

Around the world, the number of confirmed infections is nearing one million with more than 47,000 deaths recorded, according to Johns Hopkins University, which tracks virus figures globally. Some 195,000 people have recovered.

What is the latest from Spain?
The data shows 898,822 people have now lost their jobs since the start of the lockdown, including about 550,000 temporary workers. Spain’s official unemployment figure rose to 3.5 million, the highest level since April 2017.

“This is an absolutely unprecedented situation,” Labour Minister Yolanda Díaz told a news conference. The tourism and construction sectors were the hardest hit.

The numbers come amid dire predictions about the possible economic impact of the measures imposed to fight the virus. A UN report estimated that up to 25 million jobs could be lost around the world.

Meanwhile, 10,003 people in Spain have died from Covid-19 – the disease caused by the coronavirus – as 950 new deaths were reported in the last 24 hours, another daily record, the health ministry said. The number of confirmed cases rose to 102,136.

Italy has the world’s biggest death toll – 13,155 – and more than 110,000 confirmed cases. The country was the first in the West to impose stringent measures to curb the virus, and the government has warned it could be hit by a “severe” recession.

What is happening elsewhere?
More than 5,000 people have died in the US, including a six-week-old baby, and officials warn as many as 240,000 people could die in the country even with the mitigation measures in place
Belgium’s death toll has passed 1,000
In the UK, the Wimbledon tennis tournament has been cancelled for the first time since World War Two
British government officials vowed to ramp up testing within weeks, as the number of deaths in the UK saw its big daily increase – 563 – on Wednesday
Canada’s Prime Minister Justin Trudeau has promised the largest economic programme in the country’s history
The official death toll in Iran has passed 3,000

Another 41 coronavirus cases identified in Japan