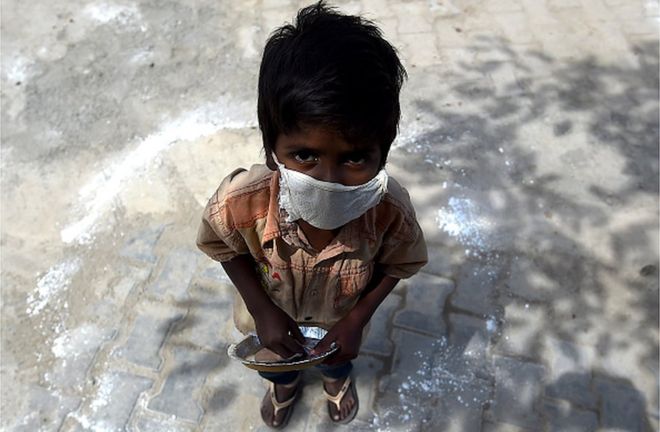 The sudden imposition of a 21-day lockdown in India to stop the spread of the coronavirus has thrown the lives of millions of children into chaos.

Tens of thousands are calling helplines daily while thousands are going to bed hungry as the country shuts down to battle the pandemic.

With 472 million children, India has the largest child population in the world and campaigners say the lockdown has impacted around 40 million children from poor families.

These include those working in farms and fields in rural areas, as well as children who work as ragpickers in cities or sell balloons, pens and other knick-knacks at traffic lights.

Sanjay Gupta, director of Chetna, a Delhi-based charity that works with child labourers and street children, says the worst affected are the millions of homeless children who live in cities – on streets, under flyovers, or in narrow lanes and bylanes.

“During the lockdown everyone has been told to stay home. But what about the street children? Where do they go?” he asks.

According to one estimate, Delhi has more than 70,000 street children. But Mr Gupta says that number is really much higher.

And these children, he says, are usually very independent.

“They look for their own means of survival. This is the first time they need assistance.

“But they are not in the system and they are not easy to reach out to, especially in the present circumstances. Our charity workers cannot move around unless they have curfew passes,” he says.

And passes are hard to obtain, because charities like Chetna are not considered essential services.

So, Mr Gupta says, they have been using innovative ways to keep in touch with the children.

“Many of these children have mobile phones, and because they generally stay in groups, we send them messages or TikTok videos about how to keep safe and what precautions they must take.”

In return, he’s also been receiving video messages from the children, some of which he’s forwarded to me. They give a sense of the dread and uncertainty that has taken hold of their lives.

There are testimonies from worried children talking about their parents losing their jobs, wondering how they will pay the rent now or where would they find the money to buy rations?

Then, there are videos from children who have to fend for themselves. 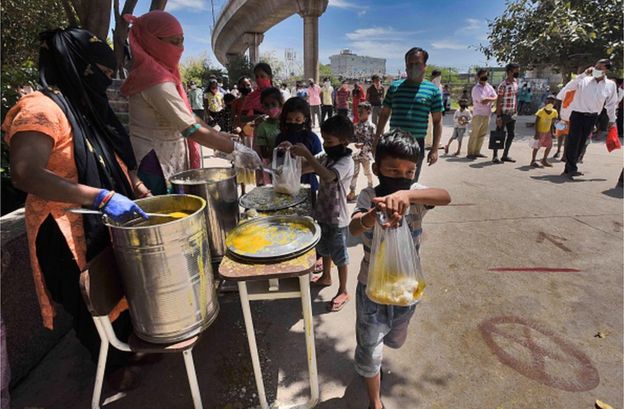 In one of them, a boy who lives on the street says, “Sometimes people come and distribute food. I have no idea who they are, but it’s very little. We only get to eat once in two-three days.”

Because of the lockdown, he says, they are not even allowed to go fetch water or firewood. “I don’t know how we can survive like this? The government must help us,” he pleads.

But the scale of the problem is daunting.

Mr Gupta says since it’s a complete lockdown, the government must ensure that the children are fed three meals a day.

Then, there are those he describes as “invisible children, the ones who live away from the main roads, in areas that are not easily accessible”.

“There are thousands of them and we are still not reaching them,” he says.

And it is not just the very poor who are affected. Others too are experiencing anxiety amid the stress of the shutdown.

In fact, a 24-hour emergency phone helpline for children, provided by the Indian government, has seen a massive spike in the number of daily calls ever since the lockdown began on 24 March.

The helpline, that works in 569 of India’s 718 districts and at 128 railway stations, fields thousands of daily calls about child abuse, violence against children, and cases of runaway or missing children.

Now, officials say, hundreds of these daily calls are queries about the pandemic.

The callers, who can either be children themselves or an adult calling on their behalf, sometimes ask for food, but most want to know the symptoms of the infection or where they can get medical assistance in case they are infected. Many children also call to talk about their anxieties or fears about Covid-19. 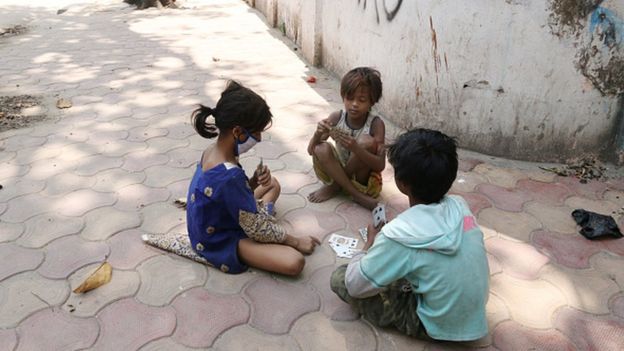 Child rights activist Bharti Ali says older children are worried because many are stuck in the middle of important school exams and there is no clarity on what will happen next.

Those under 14 are worried, she says, because “parents have gone into this whole mode of don’t touch this, don’t touch that, wash your hands, use sanitiser,” and they are curious and trying to make sense of this.

Dr Preeti Verma, member of Uttar Pradesh State Commission for Protection of Child Rights, says children read and hear about the coronavirus all the time so even if they have just a minor cough or cold, they worry they have got the infection.

“They enjoyed the first few days as it was a break from school and homework, but now as the lockdown continues and the numbers of infections rise in India, many are beginning to fret.

“Now they are stuck at home, isolated from friends and the wider society, so they are beginning to show signs of boredom and even panic.”

In this situation, Dr Verma says, the parents’ responsibility is enhanced, they have to speak to the children and reassure them.

How the spread of coronavirus is testing Africa