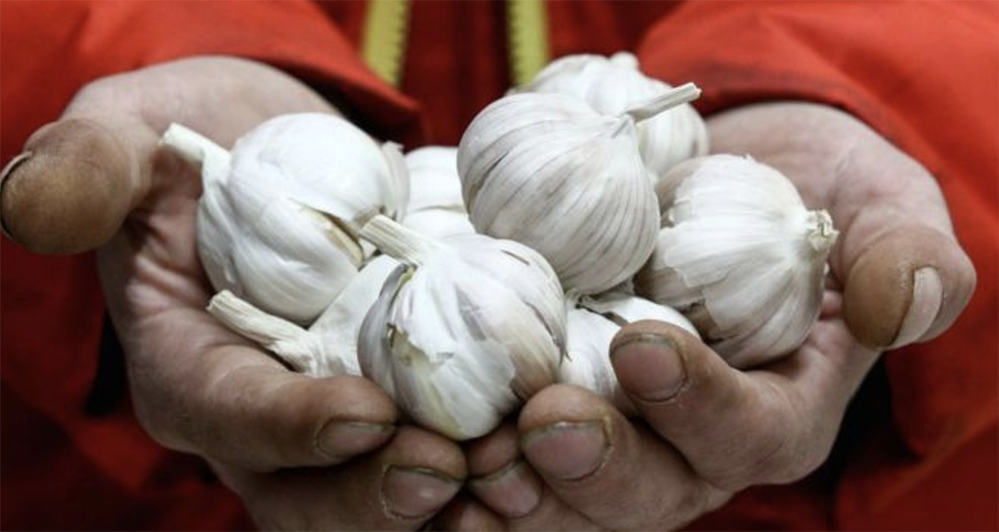 Coronavirus is emerging in more countries around the world and there’s currently no known cure. Unfortunately that hasn’t stopped a slew of health advice, ranging from useless but relatively harmless, to downright dangerous.

We’ve been looking at some of the most widespread claims being shared online, and what the science really says.

1. Garlic
Lots of posts that recommend eating garlic to prevent infection are being shared on Facebook.

The WHO (World Health Organization) says that while it is “a healthy food that may have some antimicrobial properties”, there’s no evidence that eating garlic can protect people from the new coronavirus.

In lots of cases, these kinds of remedies aren’t harmful in themselves, as long as they aren’t preventing you from following evidence-based medical advice. But they have the potential to be.

The South China Morning Post reported a story of a woman who had to receive hospital treatment for a severely inflamed throat after consuming 1.5kg of raw garlic.

We know, in general, that eating fruit and vegetables and drinking water can be good for staying healthy. However, there is no evidence specific foods will help fight this particular virus.

2. ‘Miracle minerals’
YouTuber Jordan Sather, who has many thousands of followers across different platforms, has been claiming that a “miracle mineral supplement”, called MMS, can “wipe out” coronavirus.

Sather and others promoted the substance even before the coronavirus outbreak, and in January he tweeted that, “not only is chlorine dioxide (aka MMS) an effective cancer cell killer, it can wipe out coronavirus too”.

The FDA says it “is not aware of any research showing that these products are safe or effective for treating any illness”. It warns that drinking them can cause nausea, vomiting, diarrhoea and symptoms of severe dehydration.

3. Home-made hand sanitiser
There have been many reports of shortages of hand sanitiser gel, as washing your hands is one key way to prevent spread of the virus.

As reports of the shortages emerged in Italy, so did recipes for home-made gel on social media.

But these recipes, alleged dupes for one of the country’s most popular brands, were for a disinfectant better suited for cleaning surfaces and, as scientists pointed out, not suitable for use on skin.

Alcohol-based hand gels usually also contain emollients, which make them gentler on skin, on top of their 60-70% alcohol content.

Professor Sally Bloomfield, at the London School of Hygiene and Tropical Medicine, says she does not believe you could make an effective product for sanitising hands at home – even vodka only contains 40% alcohol.

For cleaning surfaces, the US Centers for Disease Control and Prevention (CDC) says most common household disinfectants should be effective.

4. Drinkable silver
The use of colloidal silver was promoted on US televangelist Jim Bakker’s show. Colloidal silver is tiny particles of the metal suspended in liquid. A guest on the show claimed the solution kills some strains of coronavirus within 12 hours (while admitting it hadn’t yet been tested on Covid-19).

The idea that it could be an effective treatment for coronavirus has been widely shared on Facebook, particularly by “medical freedom” groups which are deeply suspicious of mainstream medical advice.

Proponents of colloidal silver claim it can treat all kinds of health conditions, act as an antiseptic, and state it helps the immune system. There are some occasional uses of silver in healthcare, for example in bandages applied to wounds, but that doesn’t mean it’s effective to consume.

There’s clear advice from the US health authorities that there’s no evidence this type of silver solution is effective for any health condition. More importantly, it could cause serious side effects including kidney damage, seizures and argyria – a condition that makes your skin turn blue.

They say that, unlike iron or zinc, silver is not a metal that has any function in the human body.

Some of those promoting the substance for general health on social media have found their posts now generate a pop-up warning from Facebook’s fact-checking service.

Professor Trudie Lang at the University of Oxford says there is “no biological mechanism” that would support the idea that you can just wash a respiratory virus down into your stomach and kill it.

Infections like coronaviruses enter the body via the respiratory tract when you breathe in. Some of them might go into your mouth, but even constantly drinking water isn’t going to prevent you from catching the virus.

6. Heat and avoiding ice cream
There are lots of variations of the advice suggesting heat kills the virus, from recommending drinking hot water to taking hot baths, or using hairdryers.

One post, copied and pasted by dozens of social media users in different countries – and falsely attributed to Unicef – claims that drinking hot water and exposure to the sun will kill the virus, and says ice cream is to be avoided. 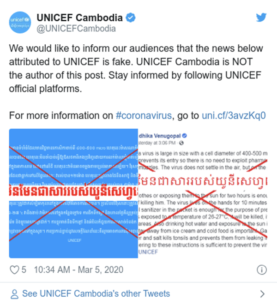 Charlotte Gornitzka, who works for Unicef on coronavirus misinformation, says: “A recent erroneous online message…purporting to be a Unicef communication appears to indicate that avoiding ice cream and other cold foods can help prevent the onset of the disease. This is, of course, wholly untrue.”

We know the flu virus doesn’t survive well outside the body during the summer, but we don’t yet know how heat impacts the new coronavirus.

Trying to heat your body or expose yourself to the sun – presumably to make it inhospitable to the virus – is completely ineffective, according to Prof Bloomfield. Once the virus is in your body, there’s no way of killing it – your body just has to fight it off.

Outside the body, “to actively kill the virus you need temperatures of around 60 degrees [Celsius]”, says Professor Bloomfield – far hotter than any bath.

Washing bed linen or towels at 60C is a good idea, as this can kill any viruses in the fabric. But it’s not a good option for washing your skin.

And having a hot bath or drinking hot liquids won’t change your actual body temperature, which remains stable unless you are already ill.