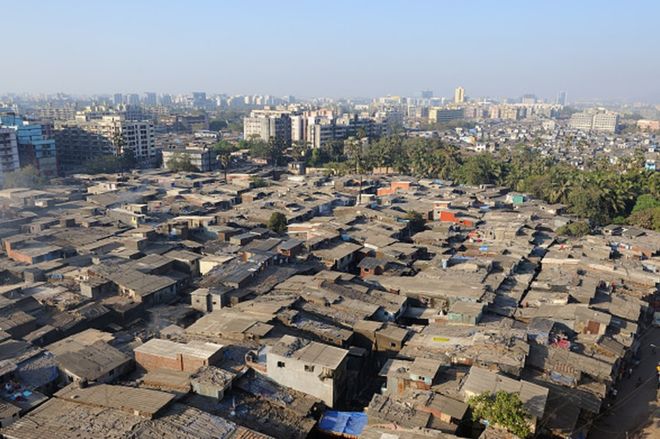 On 23 March, a 56-year-old man living in a vast, labyrinthine slum in the western Indian city of Mumbai went to see a doctor. He was feeling feverish and had a bad cough.

The garment trader lived in Dharavi where more than half-a-million people are spread over 2.5 grubby sq km, which is less than a square mile. (Imagine a population larger than Manchester living in an area smaller than Hyde Park and Kensington Gardens.) The slum was the inspiration for the Oscar-winning Slumdog Millionaire film and city planners from all over the world have studied its throbbing economy and society.

The local doctor examined the man and he left with a prescription for cough syrup and paracetamol. Three days later, the man turned up at the private Sion Hospital close to home. His fever had climbed and the cough was getting worse. He said he had no travel history, so doctors gave him more cough syrup and sent him home once again.

On 29 March, the man returned to the hospital with signs of respiratory distress. Doctors admitted him, and promptly sent swabs for the Covid-19 test.

Three days later, the results arrived – he had tested positive. His condition deteriorated sharply and doctors tried to move him to a bigger hospital already treating Covid – patients.

It was too late: he died that evening.

That garment trader was the first Covid-19 patient from Dharavi. People living in this packed-to-the gills slum city suffer from all the common diseases afflicting Mumbai, one of the world’s most densely-populated cities, from diarrhoea to malaria.

But an outbreak of coronavirus in a place where social distancing is an oxymoron could easily turn into a grave public health emergency and overwhelm the city’s stretched public health system.

Nobody realises this more than the officials racing to track and contain the infection.

Patient No 1 of Dharavi lived with his eight-member family – his wife, four daughters, and two sons – in a poky 420 sq ft one-room apartment in a low-rise slum tenement ringed by squalid shanties.

“When we asked his family, they told us the man had no recent travel history and only went to the local mosque,” Kiran Dighavkar, an assistant municipal commissioner in charge of the area, told me.

But there was a twist in the tale.

The man owned another apartment in the same complex. There he hosted five people who had reportedly arrived from Delhi after attending a conference in early March organised by Tablighi Jamaat, a religious movement that has followers in more than eight countries including Indonesia, Malaysia and the US.

Hundreds of people who attended the religious event in the capital set off several Covid-19 clusters across the country and are now linked to some 650 cases across 14 states.

The police believe the five men lived in the Dharavi apartment for two days – between 19 and 21 March- before they left for Kerala. “We are trying to trace these people,” said Mr Dighavkar.

“We have to find out the source of infection. How did this man get the infection and from whom? And we have to contain this infection by taking aggressive steps,” he said.

The family of the deceased trader insists he didn’t have a passport, something that the police is sceptical of. So they are trying to dig out his mobile phone records to find out more about his movements.

For the moment, the race is to ensure that the infection is contained. So 308 apartments and 80 shops in nine six-storey buildings in the complex where the trader lived have been completely sealed. Some 2,500 residents have been put under home quarantine. Food rations are being supplied. Health workers have disinfected the apartments with household bleach. Swabs of eight ‘high-risk’ occupants of the building – the trader’s family and an acquaintance in the building – were sent for testing.

More than 130 residents above the age of 60 and another 35 who are suffering from unrelated respiratory diseases are being closely watched for Covid 19 symptoms. 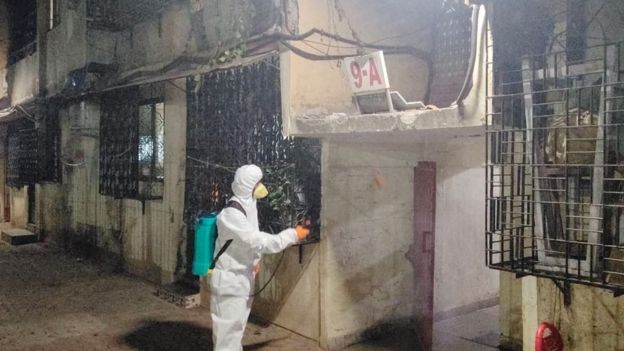 Fearing an outbreak, authorities have taken over the 50-bed Sion Hospital, and quickly set up a 300-bed quarantine facility in a neighbouring sports complex. Protective gear has been given to doctors and nurses at the hospital.

Yet all this may not be enough to prevent an outbreak.

On Thursday, a 35-year-old doctor working with a private hospital and living in the slum tested positive for the virus. Municipality workers scrambled to isolate and seal 300 people living in the doctor’s building. They have also identified 13 high-risk contacts in the building and sent their swabs for testing. The doctor told officials that two nurses in his hospital had tested positive for the virus. And at the weekend, a 30-year-old woman inside the same building complex as the trader and a 60-year-old man, who owns a metal fabrication shop, tested positive.

“We are still able to try to contain the infection of the gated slum colonies. But there are the slums outside, and if we get cases there, we can’t isolate them at home, and have to send even the high-risk cases to the sports complex quarantine centre,” says Mr Dighavkar.

If that happens, the struggle to contain the infection will turn into a messy battle. The local hospital and makeshift quarantine will be easily overrun by cases. 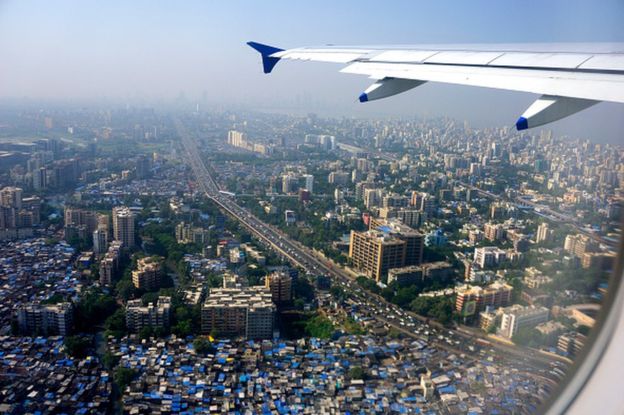 Testing will have to be stepped up and results will have to arrive in time. After the first two cases – the trader and the doctor – 21 samples were collected from slum. After more than 48 hours, the results of only seven have come in. The state-run hospital where the testing is being done says it is swamped by samples. Another 23 samples were picked up after the two new cases and sent to the lab on Saturday. It is not clear when the results will arrive.

“We are losing time because of the delay in results. It also delays shifting people who test positive into isolation,” Virendra Mohite, the medical officer, who is leading the health teams in the slum, told me.

These are some of the real challenges to contain a massive outbreak of a disease in a unique, otherwise self-contained slum, which is home to fishermen, potters, furniture makers, garment makers, tailors, accountants, waste recyclers and even some of Mumbai’s edgiest rappers. Dharavi, writer Annie Zaidi once observed, is a place full of “stories of desperation and grit, initiative and very, very hard work.”

Now it faces its most daunting challenge of preventing a cataclysmic wave of contagion.

Students are weary of online classes. But colleges can’t say if they’ll open in fall 2020.