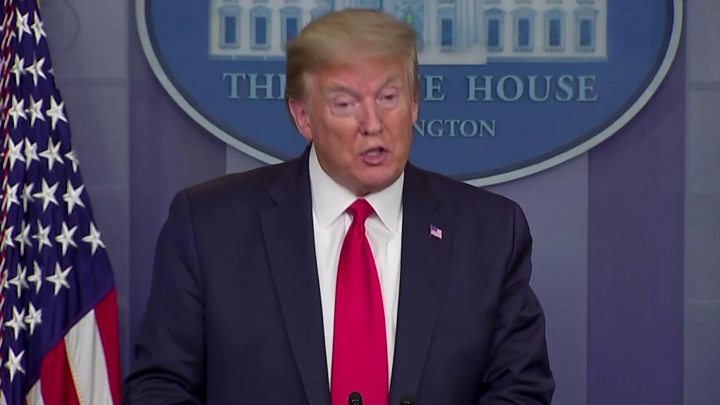 US President Donald Trump has signed an executive order to temporarily suspend the approval of some green cards.

The measure, which contains a number of exemptions, is to last for 60 days and then could be extended, he said.

Mr Trump says the order is designed to protect American workers’ jobs in an economy pummelled by the coronavirus.

Critics have accused him of using the pandemic as cover to ram through long-sought hardline immigration policies in an election year.

“This will ensure that unemployed Americans of all backgrounds will be first in line for jobs as our economy reopens,” Mr Trump said during Wednesday’s coronavirus briefing at the White House.

Who will lose out and who is exempt?
The measure is expected to stop the practice of green card holders sponsoring their extended families for permanent US residency, which the president calls chain migration.

But it makes an exception for American citizens’ spouses and unmarried children under the age of 21.

Also exempt are the hundreds of thousands of green card applicants already living and working in the US, and those seeking entry to work as doctors, nurses or other healthcare professionals.

Another exception is the hundreds of thousands of temporary guest visas issued each year to such applicants as farm labourers and skilled workers in the H-1B visa programme.

What will be the impact?
The pandemic has blunted the immediate effect of the order because almost all visa processing by the state department has been halted for weeks with consulates closed.

Nevertheless, according to the the Washington-based Migration Policy Institute, Mr Trump’s order could block more than 20,000 applicants per month from obtaining a green card.

Omar Jadwat, director of the American Civil Liberties Union’s Immigrants’ Rights Project, said the policy “will cause real pain for families and employers across the country”.

The president’s move is likely to face legal challenges.

How did we get here?
The president vowed to suspend “all immigration” to the US on in a tweet on Monday night. 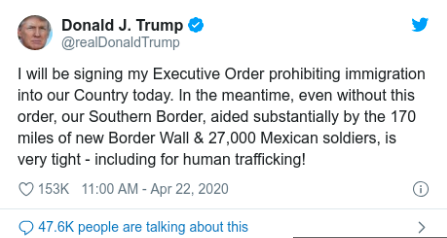 Like many other nations, the US has imposed sweeping travel restrictions to contain the pandemic.

The Trump administration has limited visitors from China and most of Europe, while closing its borders to all but “essential” travel from Mexico and Canada.

The president has also invoked a 1944 law aimed at preventing the spread of communicable diseases to turn away asylum seekers at US borders.

Why is Trump doing this?
The president says he is seeking to protect American jobs.

More than 20 million Americans have lost their jobs amid the coronavirus outbreak, and the president has said the government had a “solemn duty” to ensure they regain work.

Mr Trump, a Republican, came into office partly because of his hardline stance on immigration, and has made the issue central to his presidency.

In November’s election, he is expected to be challenged by former Vice-President Joe Biden, a Democrat who is much more in favour of immigration.

Others have accused the president of trying to distract attention from his response to the coronavirus. The US has seen more than 46,000 deaths and 840,000 infections, the most in the world.

What are green cards?

They give immigrants legal permanent residence and the opportunity to apply for American citizenship
In a typical year, nearly one million green cards are issued in the US

The majority – roughly 70% – go to those with relatives living in the US, according to a 2018 report from the US Senate

For employment-based green cards, a common form of the residency status, roughly 80% are issued to those already in the country, shifting from a temporary visa to permanent residence